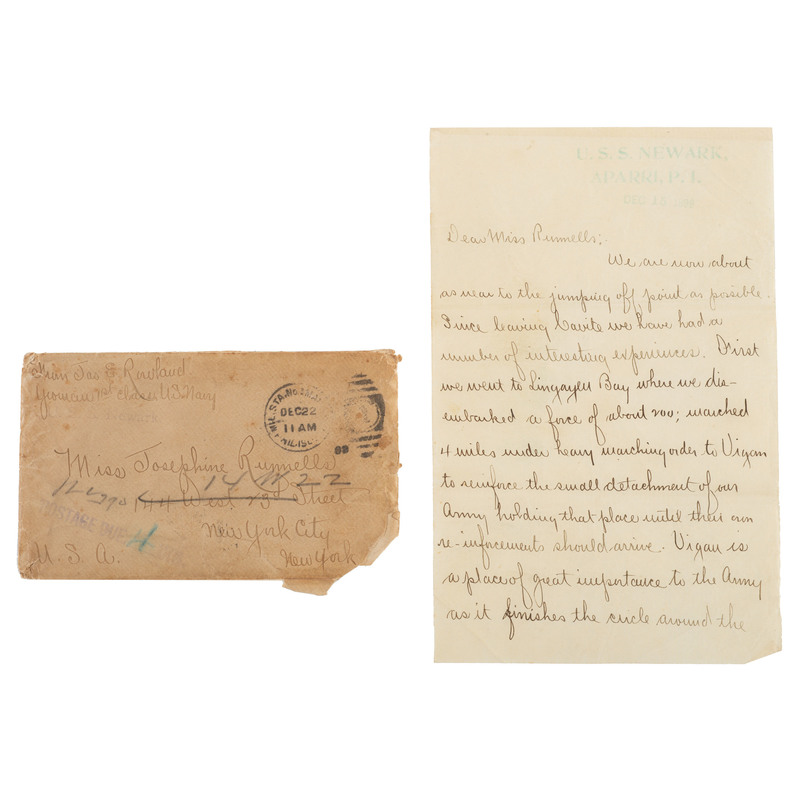 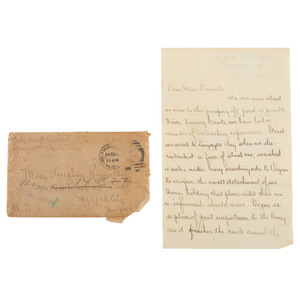 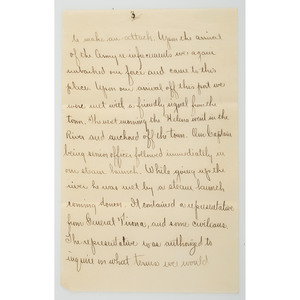 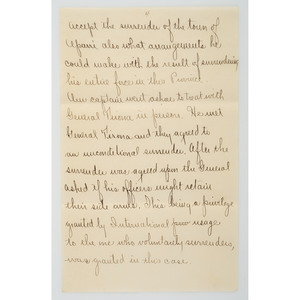 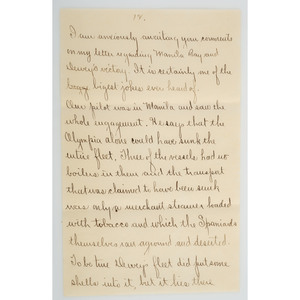 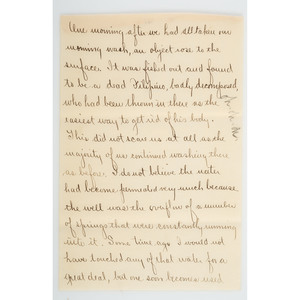 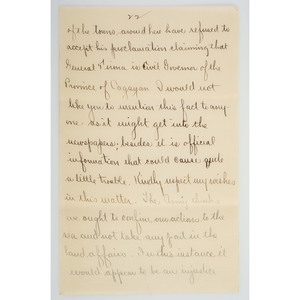 James E. Rowland, Letter Written Aboard the USS Newark During the Philippine-American War, 1899

A naval officer during the Philippine-American War, Rowland writes this letter while aboard the USS Newark (C-1), a protected cruiser in the service of the US Navy 1891-1912. Under the command of Captain Bowman H. McCalla (1844-1910), the Newark sailed from New York in March of 1899 for patrol in South America. On October 17, McCalla and his crew departed for the Philippines to support the United States Army in the Philippine-American War. They arrived in Cavite on November 25, 1899 and took station off Vigan, a city on the large island of Luzon of great military advantage, and landed troops for garrison duty. Rowland tells Runnells that they arrived specifically at “Lingayeu Bay where we disembarked a force of about 200; marched 4 miles under heavy marching order to Vigan to reinforce the small detachment of our Army holding that place until their own reinforcements should arrive. . . we could plainly see the insurgents in the town across the river, and shots would be exchanged every night by outposts, but they did not dare to make an attack.”

In the days to follow, Bowman McCalla, Rowland’s captain, met with General Tirona (1864-1939) to discuss the terms of Tirona’s surrender: “Our captain went ashore to treat with General Tirona in person. . . they agreed to an unconditional surrender. . . Within an hour after the surrender had been agreed upon, all the troops in the city marched to the Plaza and laid down their arms. At the same time an American flag was hoisted thus showing our possession. The General who is a very intelligent man, and of very high character, had realized a long time ago that he was on the wrong side and had wished to surrender, but there was no one for him to surrender to. The citizens all speak very highly of him, claiming that he has respected their rights, been kind to prisoners.”

Aguinaldo (1869-194), by contrast, is more ruthless, per Rowland’s description: “During one of Aguinaldo’s forced marches, one of the American prisoners, believed to be the Boatswain mate of the Yorktown, was too ill to keep up with the party. This so incensed Aguinaldo that he grabbed a bayonet off of a soldier’s gun and rammed it into him, killing him on the spot.” Aguinaldo’s current whereabouts are unknown, which has potentially violent consequences: “The Army do not know as yet whether [Aguinaldo] has escaped through their lines or not. They have captured his headquarters at Banqui but not him. . . This is the peaceful side, but we do not know how soon we may have to shed blood in that near vicinity; not that of the better class however, but possibly some of the lower, as General Tirona has received a dispatch from Aguinaldo saying that he was coming down that valley.” Rowland returns to the subject of Tirona’s surrender and relates some sensitive information to Miss Runnells, which he asks her to keep to herself: “There is likely to be some very hard feelings between Army and Navy over this surrender. Captain Batchelor commanding the Army in the valley has deliberately appointed a Civil Governor after being notified that we had done so. This usurper has issued a proclamation, said to have been ordered by Captain Batchelor. The local Presidents of the towns around here have refused to accept his proclamation claiming that General Tirona is Civil Governor of the Province of Cagayan. . .The army thinks we ought to confine our actions to the sea and not take any part in the land affairs. In this instance it would appear to be an injustice. . . The Army and Navy are constantly clashing. That degree of harmony that is essential for co-operative action seems to be lacking.”

In addition to the risk of attack by insurgents, there were many other hazardous and unpleasant circumstances facing Rowland and his shipmates, including disease and the oppressive heat. He shares some details with his correspondent, writing in part: “Then again they have another unenviable thing in this country. It is called the dobe itch. It breaks out all over you and itches so it nearly sets you crazy. When it leaves it is a great relief. It does however leave a reminder of its visit in the form of a scar wherever there was a sore. It is one of the worst things of this part. While stationed at Vigan we were told not to eat any pork, unless it was sent from the ship. . . it was a necessary precaution as the surgeons claimed the hogs were full of leprosy from eating dead Filipinos . . . We were not allowed to drink the water unless it was boiled. . . There was a well in the rear of the house where we were stationed. We were allowed to wash ourselves in the water but not drink any of it. One morning after we had all taken our morning wash, an object rose to the surface. It was fished out and found to be a dead Filipino, badly decomposed. . . This did not scare us at all as the majority of us continued washing there as before. . . . Some time ago I would not have touched any of that water for a great deal, but one soon becomes used to such things in this business.”