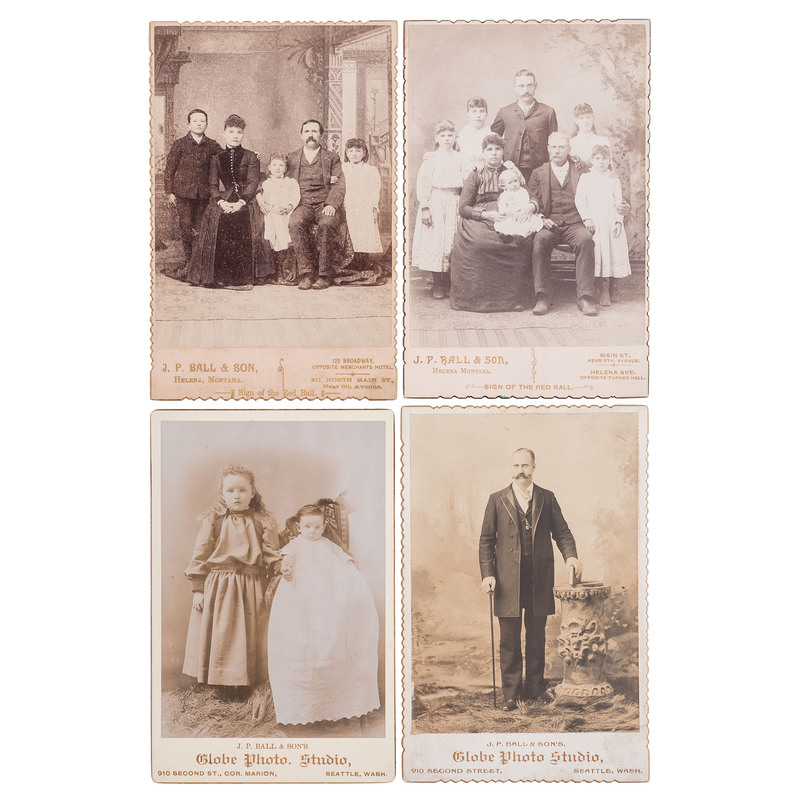 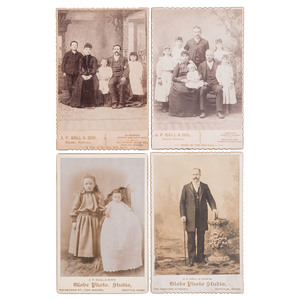 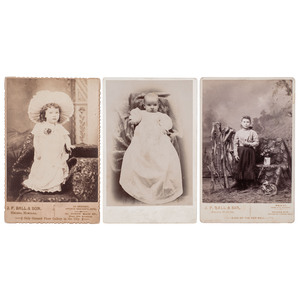 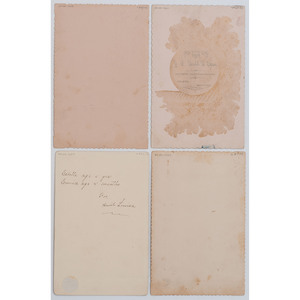 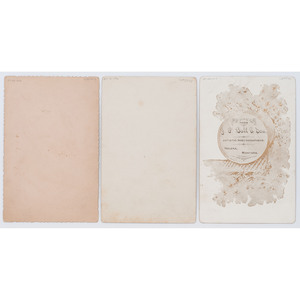 Lot of 7 cards by James Pressley Ball and his son when they moved their studios out west, comprising:

Cabinet card studio portrait of a family of five. J.P. Ball & Son: Helena, n.d., circa 1888. 129 Broadway and 211 North Main St. imprint on recto. The parents are seated with their youngest child between them; their two older children standing at their sides affectionately putting their arms around their parents.

Cabinet card studio portrait of a family of eight. J.P. Ball & Son: Helena, n.d., circa 1890. Main St. Near 6th and Helena Ave. imprints on recto and verso. An artfully arranged extended family portrait with the wife holding the youngest child on her lap seated next to her possible father-in-law. Her husband stands behind them flanked by his four daughters.

Cabinet card studio portrait of a young girl. J.P. Ball & Son: Helena, n.d., circa 1890. Main St. Near 6th and Helena Ave. imprints on recto and verso. A girl wearing a dark pleated skirt and light skirt stands next to a rustic fence and a plant growing out of a can.

James Presley Ball (1825-1904) is one of the most renowned African American photographers at one point owning the largest photographic gallery west of the Appalachians. When visiting White Sulphur Springs, Virginia in 1845 he met John B. Bailey, an African American daguerreotypist from Boston where he acquired the passion and skill of photography. He opened a studio in Cincinnati later that year, and though it was unsuccessful, he continued his art with studios in Pittsburgh and Richmond and traveled as an itinerant daguerreotypist. In 1849, he reopened a studio in Cincinnati. He hired his younger brother Thomas Ball to work as an operator, and in 1852 hired his future brother-in-law Alexander Thomas to work with him. By 1857, their gallery was one of the grandest in the United States attracting notables including Frederick Douglass. In 1887 Ball was chosen as the official photographer of a celebration of the 25th anniversary of the Emancipation Proclamation held in Minneapolis-St. Paul. In 1888, he moved to Helena, Montana with his son where he operated a studio for several years before moving again in 1892 to Seattle.