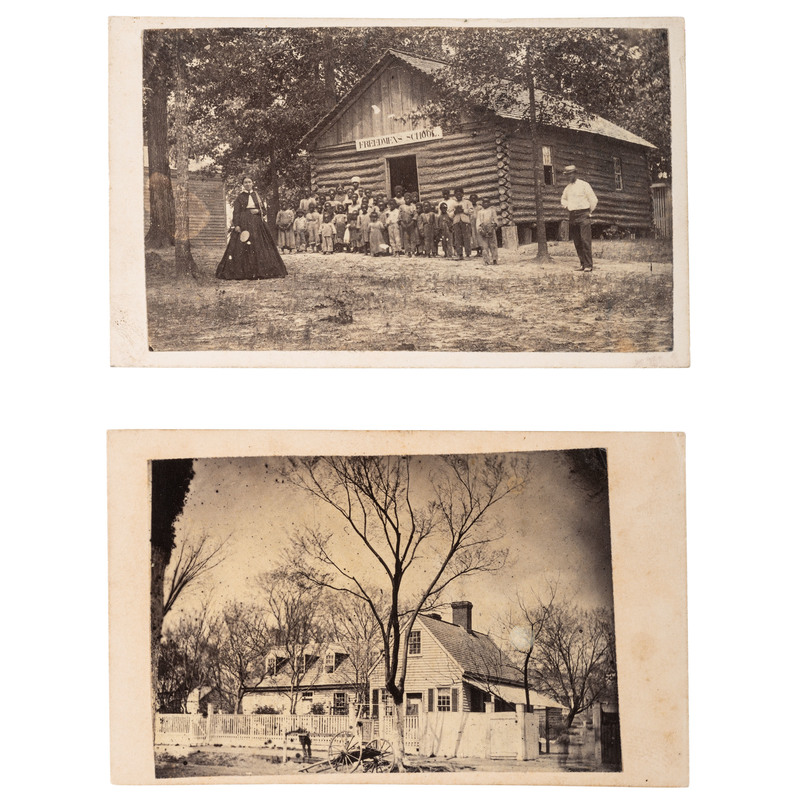 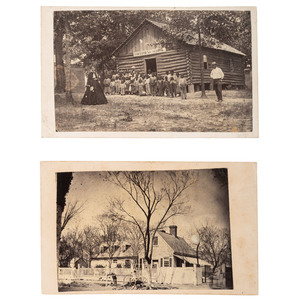 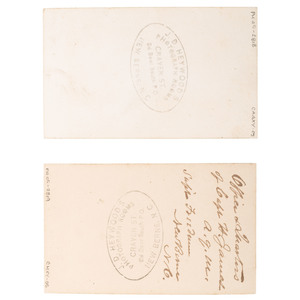 Includes a view a several young, African American students standing before  a log building with a sign reading "Freedmen's School" above the door. An African American man wearing a hat stands to the left of the group, with a white woman, likely a teacher, at the opposite side. Known as James' Plantation School, this freedmen's school was possibly among those established by Horace James on the Yankee or Avon Hall plantations in Pitt County, 1866. Verso stamp credits "J.D. Heywood's Photograph Rooms. . . New Berne, NC," n.d., ca 1868. After the Civil War, Freedmen's Schools were established for African Americans who had been legally deprived of education in slave states. This image dates from the earliest phase of Freedmen's Schools and is believed to be the earliest image of a school in North Carolina.

Also with a CDV showing the exterior of a two-story residence with wooden siding, enclosed by a white picket fence. Verso inscription identifies the building as the "Office & Quarters of Capt. H. James A.Q.M., Sup't Freedmen, New Berne, NC," with Heywood's stamp below, n.d., ca 1868.

Horace James (1818-1875) served as a minister, Union Army chaplain, and advocate for fugitive African Americans during the Civil War. A native of Medford, Massachusetts, he graduated from Yale University in 1840 and was ordained as a Congregational minister. Upon the outbreak of the Civil War, James, who was known to deliver powerful antislavery sermons, enlisted as a chaplain with the 25th Massachusetts Infantry and accompanied his regiment to Fortress Monroe, Virginia. During his time there, James was tasked by General Benjamin F. Butler (1818-1893) with the supervision of the enslaved men, women, and children who had fled north to Union lines. By consequence of his work in this capacity, James also led assistance efforts for fugitive slaves on Roanoke Island and in New Bern in 1862. James established evening schools for escaped slaves in New Bern, where they received religious instruction as well as donations of food and clothing. In November of 1862, Major General John G. Foster (1823-1874) named him Superintendent of Negro Affairs, affording him greater authority over the livelihood of black refugees in North Carolina, including census taking, allocating rations, housing individuals and families, and educating freedmen through both traditional and vocational means.

In 1864, James was discharged as regimental chaplain and commissioned as captain and assistant quartermaster. Though he retained his position as superintendent, the role evolved and, with the formation of the Freedmen's Bureau, James served in various leadership capacities in the new federal agency. He left the Bureau in 1865, however, to take on an enterprise with Brigadier General Eliphalet Whittlesey (1821-1904) and Winthrop Tappan, wherein they leased two Pitt County plantations, Avon and Yankee Hall, and hired freedmen as laborers. Though he established schools and churches on site, conditions soured in 1866 when a laborer was killed at one of the plantations. James was tried as an accomplice in the shooting and for exploitation of the freedmen in an alleged profit-making venture. Though he was acquitted, James turned his attentions to international travel before his death in Massachusetts in 1875.

Mounts of both with toning and light staining/soiling. Office & Quarters CDV with fine black spotting throughout image, possibly in negative.