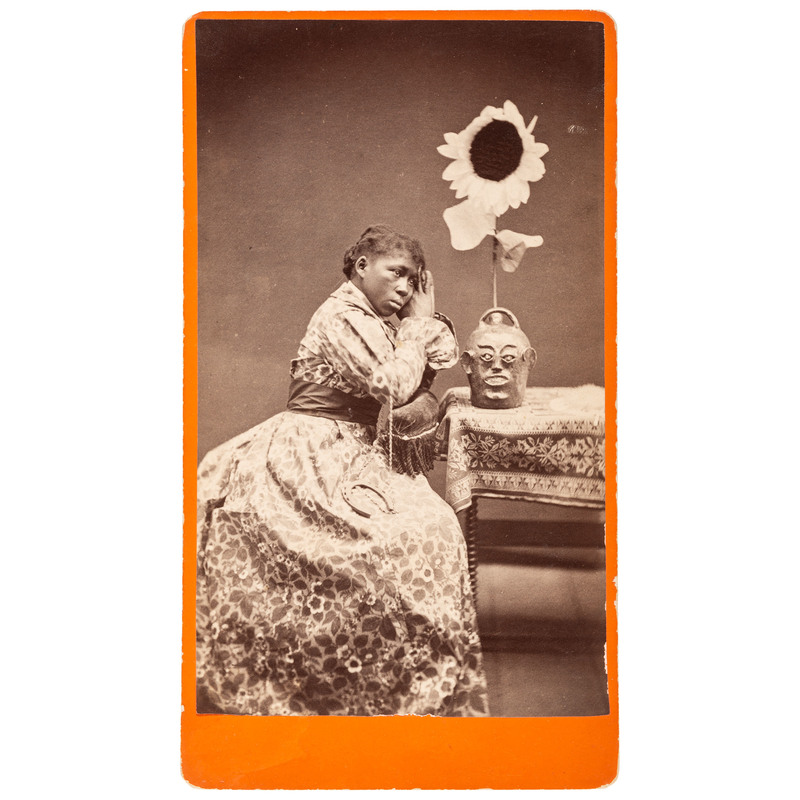 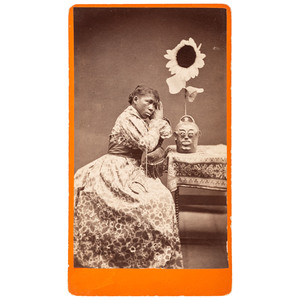 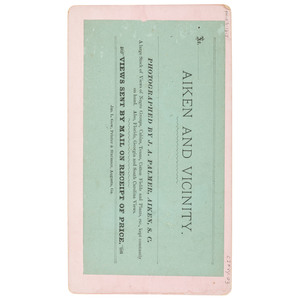 The Wilde Woman of Aiken cabinet card from the series Aiken and Vicinity. J.A. Palmer (1825-1896): Aiken, South Carolina, 1882. Printed imprint label affixed on verso: “Aiken and Vicinity. / Photographed by J.A. Palmer, Aiken, S.C.” Neither numbered nor titled in manuscript, as was typical of Palmer. The only other example of this image, now in the collection of the Metropolitan Museum, New York, has the title written, "The Wilde Woman of Aiken."

In 1882, Oscar Wilde visited the United States on an 11-month lecture tour and drew criticism from American audiences for his promotion of the Aesthetic Movement and the assertion that anything could be beautiful. The Aiken, South Carolina-based photographer J.A. Palmer apparently composed this satirical photograph in response, with things he found to be inherently distasteful: an African American woman, highly patterned fabrics, and an Edgefield face jug holding a large sunflower, an emblem of the Anglo-American Aesthetic Movement and Wilde in particular who was known to wear one on his lapel. The horseshoe resting on the woman’s lap is also likely a reference to Wilde, suggesting his “lucky” Irish origin.

The series also included a similar image as a stereoview, titled An Aesthetic Darkey, which mirrors the composition and title of the woodcut The Aesthetic Monkey by William Holbrook Beard and featured on the January 28, 1882 issue of Harper’s Weekly. Beard’s image clearly intends to lampoon Wilde with the simian wearing Wilde’s iconic dandy wardrobe with a wide collar, foppish tie, and velvet suit. Both Beard and Palmer’s images show the subject with their hands folded gazing adoringly upon a sunflower with an open book, horseshoe, and a calla lily, another Aesthetic movement emblem. Palmer’s image replaces the monkey with a boy and the nondescript face with an Edgefield face vessel.

Palmer’s inclusion of a face jug is in some ways unsurprising as Aiken was on the eastern edge of the historic Edgefield District, about 20 miles away from Edgefield itself, and it was here that the art form was born. First created by slaves in the 1850s and later freed African Americans, the wheel-thrown stoneware vessels employ alkaline glazes and feature highly expressive features applied in white kaolin clay, often left unglazed. While their full history is still shrouded in mystery, many historians believe that the jugs were used in African religious and spiritual rituals. Palmer was clearly aware of the jugs, but like other contemporary whites, he likely associated these vessels as stylized, mocking portraits of their creators. He was almost certainly ignorant of their probable ritualistic purpose or inherent artistic value. Indeed, it is unclear that Palmer who was best known as a photographer for his images of African Americans, often sympathetic in their portrayal, hoped to achieve or what he perceived the market for these images would be. Regardless of his intent, this image remains the earliest visual representation of an Edgefield face vessel.

For further in-depth analysis of this image, please see Victoria Dailey. "The Wilde Woman and the Sunflower Apostle," in The Book Collector, Winter 2019, pp. 627-646 and forthcoming online in the Los Angeles Review of Books.