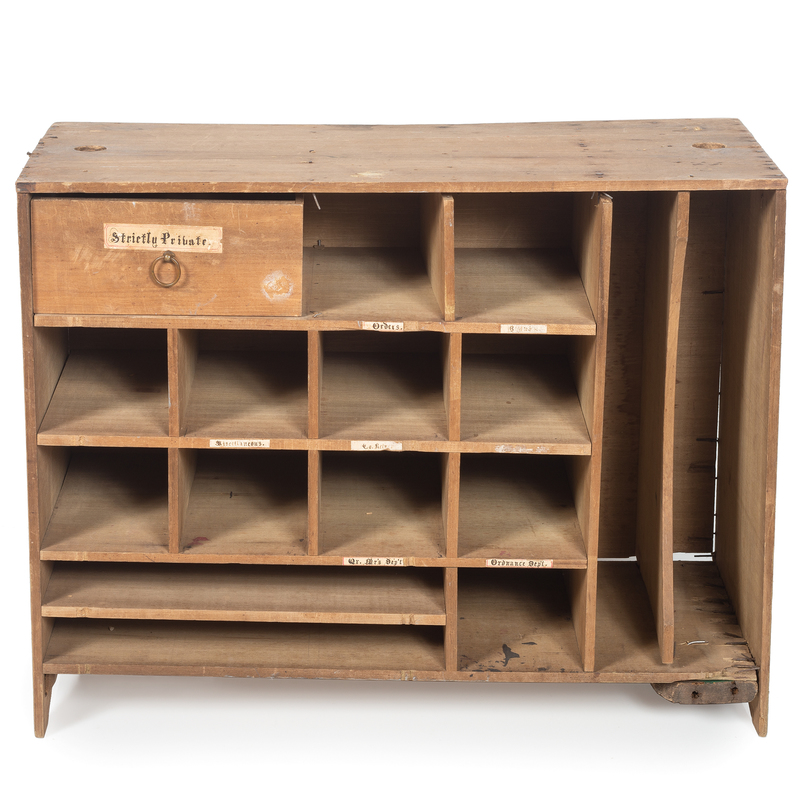 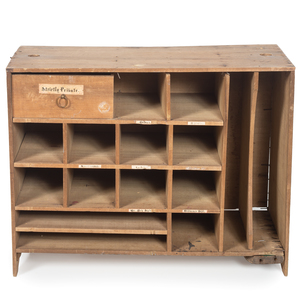 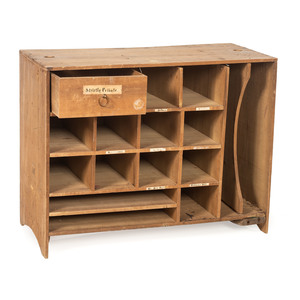 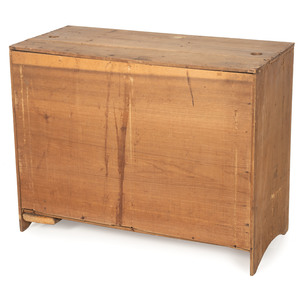 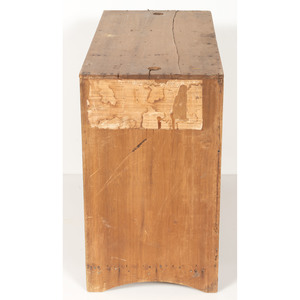 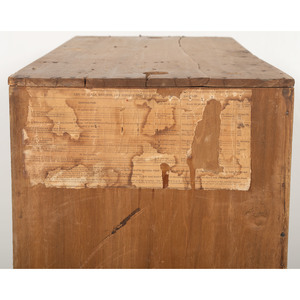 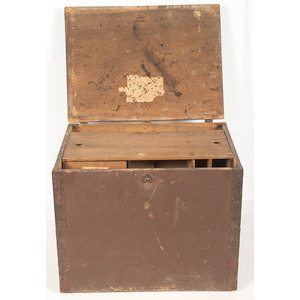 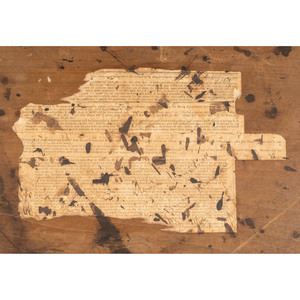 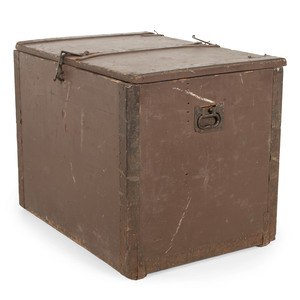 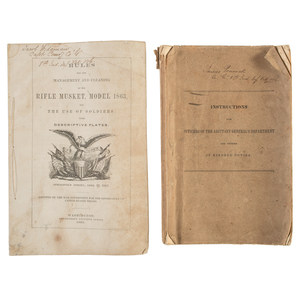 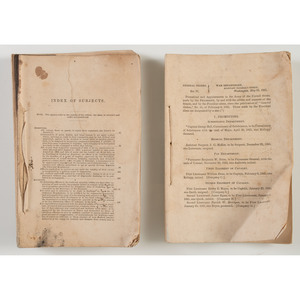 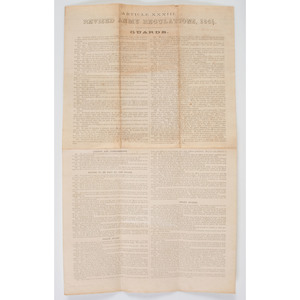 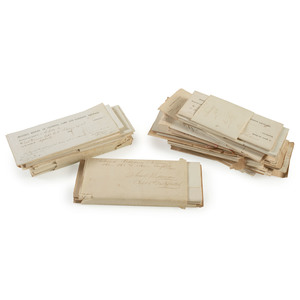 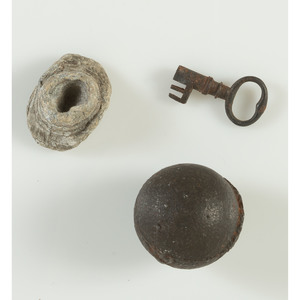 Field desk of Jacob Widaman, Co. G, 8th Indiana Volunteer (& Veteran Volunteer) Infantry, 11.5 x 25.25 x 19.5 in., housed in an iron-bound wooden box, 20 (w.) x 27 (l.) x 22 (ht.) in. Originally had 11 square cubby holes, two horizontal shelves for papers and two vertical sections, plus a small drawer with label "Strictly Private." Widaman has labeled many of the cubbies - "Orders," "Q.M.'s Dept.," "Ordnance Dept.," etc. On right side of desk in pencil is his name, unit, and New Orleans. Includes one expended Minie ball (one side now very flat) and a piece of grape shot, ca 1 in. diameter. Also included is a small key, although nothing on the desk currently has a lock.

This desk provides a snapshot of the life of a Civil War company captain, containing both used and unused forms of every variety - over 500 of them - from December 1861 until the autumn of 1865. As the units were leaving the field, there were still inventories and returns to be filled out. The following booklets are enclosed:

Rules for the Management and Cleaning of the Rifle Musket, Model 1863 for the Use of Soldiers, with Descriptive Plates. Washington: GPO, 1863. With "Jacob Widaman / Capt. Comdg. Co. G / 8th Ind. Inf. Vet. Vols." on the title page (front cover missing).

Two groups of General Orders, stitched together for binding, one including an "Index of subjects." Plus dozens of GO's not in these collections, loose among the other papers.

In addition, the group includes numerous Army Regulations, circulars, many instructions from the Ordnance Office, and much more. Instructions for filling out any form one can imagine. And the forms in this desk cover the gamut - muster rolls (in and out), consolidated morning reports, "Final Statements," "Volunteer Descriptive lists and account of Pay and Clothing," furlough forms, discharge forms, certificates of disability for discharge forms Dozens of the documents are unused and many more filled out. A few post-war documents, mostly concerning fraternal organizations and pension applications are also included.

The 8th Indiana saw action all over the eastern part of the continent, and the papers give testimony to that. The (likely field-printed) orders were issued in Batesville, AR; Camp Arno, AR; Camp Pittsburg Landing, TN; Camp Corinth Road, MS; Algiers, LA; Ligerville, LA; Brasher City, LA; Indianola, TX; Fort Esperanzos, TX; Brownsville, TX; and Pass Cavallo, TX, which is Lincoln's Emancipation Proclamation with a preface by General Dana.The unit was first organized as a three-month regiment in April 1861. It left the state on June 19, going to Clarksburg, then Buckhannon, WV, joining Rosecrans' brigade. It participated in the Battle of Rich Mountain, went into camp at Beverly, then returned to Indianapolis to muster out. The 8th was immediately reorganized for three years and mustered in on September 10. It immediately left for St. Louis where it joined Fremont's Army, then moved to Jefferson City and Colonel Jefferson C. Davis' brigade. In the Western Theater it participated in battles at Warrensburg, Pea Ridge, Cotton Plant (AR), Austin and many others throughout the autumn and winter. In 1863 it joined Grant at Milliken's Bend, LA, and was engaged at Port Gibson, Jackson, Champion's Hill, Black River Bridge and the siege of Vicksburg. It remained at Vicksburg most of the summer, then moved to Carrollton and joined the campaign through the Teche country. It took part in the capture of the fort on Mustang Island, TX, then moved to Indianola, where 417 out of 515 men veteranized. They went home on their furlough in April 1864 before returning to New Orleans. Shortly thereafter it was engaged at the Atchafalaya. It was then ordered to Washington, DC, arriving in August and proceeding to Berryville, VA. It participated in the Shenandoah Valley campaign, and was engaged at Opequan, Fisher's Hill and Cedar Creek before leaving for Savannah, GA. It remained on duty in Georgia until mustering out near the end of August 1865.

The unit lost 245 by death and 75 more by desertion out of 1046 original men and 190 recruits. Two of those losses were color-bearers John Swafford and Harrison Webb, KIA at Vicksburg on June 22. They were cited for gallantry in the after-action reports. Family history has it that the Minie ball and grape shot with this lot were from this battle, though there is nothing to substantiate this.

Jacob Widaman (1817-1897) enlisted when the unit was reorganized in September 1861. He was commissioned as a 1st lieutenant, then promoted to captain in early 1863 and major just as the was was ending, and so never mustered at that rank. The desk has just a few papers from the early part of the war, and apparently everything from 1863 until after the unit mustered out. He is listed as a resident of Cambridge City, IN, although he was born in Pennsylvania and lived in Iowa after the war. He married Agnes Jane Cary (1832-1903) and had two daughters (Martha and Alice Anna) who both survived into adulthood. He died in Lucas County, IA and is buried at Russell Cemetery in that county.

Many nails exposed having split out of the thin shelving. One divider out completely. One handle of carrying box missing. Iron straps with slight rust "patina." Most of the papers are in good condition, having expected handling wear, just a few have tears. Some of the unused forms look nearly new.