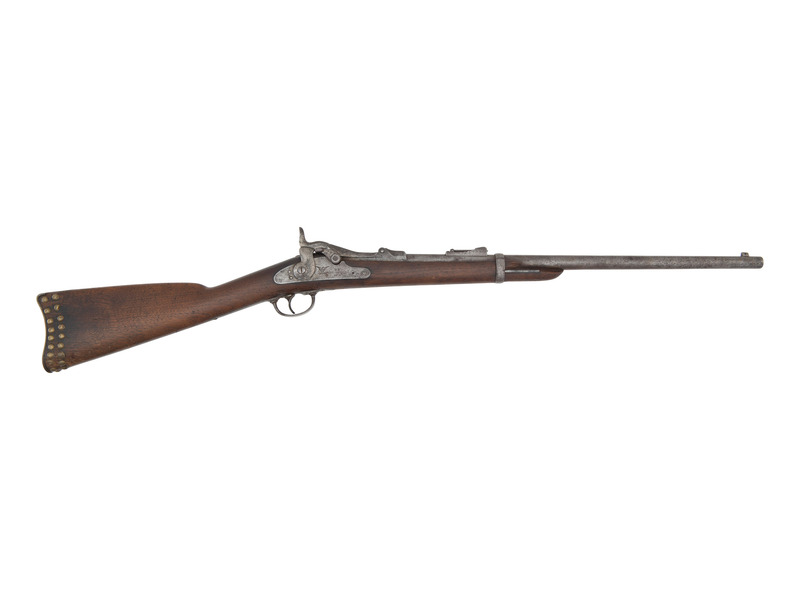 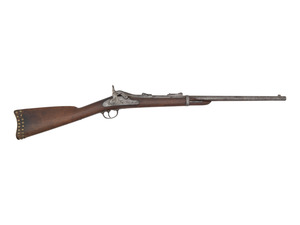 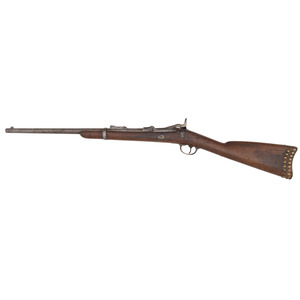 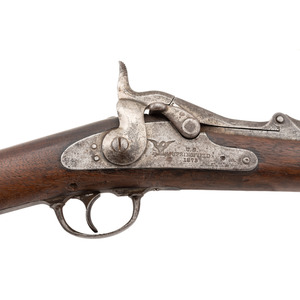 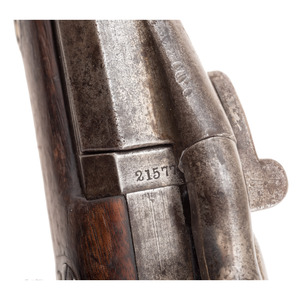 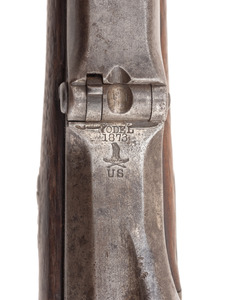 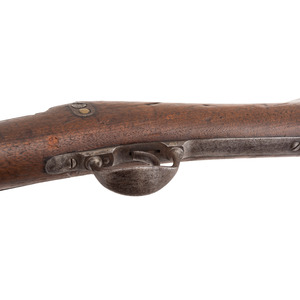 .45-70. 22" barrel length. SN: 21577. Blued and color casehardened finish, smooth walnut short-comb, long-wrist stock. Lock marked with the "{US SPREAD-WINGED EAGLE}" and in three lines "U.S./SPRINGFIELD/1873". Trapdoor marked "MODEL/1873/{EAGLE HEAD}/{CROSSED ARROWS}/US". Serial number at rear of receiver. No barrel proofs as is correct, with only an "L" and "B" sub-inspection mark. No visible inspection marks in wood due to wear. Narrow receiver, two-click tumbler, high-arch breech, spring-loaded steel firing pin, coarse checkered hammer without lip, smooth trigger, two-piece triggerguard, barrel band without stacking swivel. 1873 pattern rear sight numbered 1 to 5 on the side walls and 6 to 12 on the ladder, German silver sight blade in steel base is an old, period of use replacement. Correct solid buttplate marked "US" without implement hole in stock. Carbine has none of the 1877 upgrades, remains in its original “Custer Era” configuration. Sling bar cut from mounts, typical of Native used guns with brass tacks filling the bar holes in the mounts. Butt decorated with a double line of brass tacks, some broken and damaged and one missing, showing an empty square shank hole.

Research in the Springfield Research Serial Number books finds that US Model 1873 Carbine #21573, only four numbers from this one, was "Captured From Indians" on October 1, 1879. On that same day carbines #20498 and 21659 were also captured from Native Americans, suggesting these guns were lost at the Battle of the Little Bighorn. Carbines #21551, #21553, #21561 and #21609, all quite close to this gun, are all listed as in the possession of H troop of the 7th Cavalry and as having been damaged on June 25, 1873, the day of the battle. These guns were subsequently returned to Springfield Arsenal for repairs on August 4 of 1877 and no doubt received the 1877 upgrades at that point, including the new stock with the shorter, thicker wrist and longer comb. These serial numbers strongly suggest that this gun was one of the Troop H guns on the battlefield that day. Troop H was part of the three troop group under Captain Benteen's command during the battle, along with Troops D and K. Benteen's command was charged with bringing the additional supplies and ammunition to the field after the fight commenced, with the famous note being delivered to him from Custer reading: "Benteen. Come on, Big Village, Be quick, Bring packs. P.S. Bring Packs." When Benteen arrived on the field he first encountered Reno's detached command of Troops A, G and M and the two commands joined forces and created an ersatz defensive position on a bluff that is now known as Reno Hill. Despite numerous attempts by the Native Americans to overrun and infiltrate Reno and Benteen's defensive works, their forces managed to hold old out until nightfall, with the eventual withdrawal of the Indians finally bringing an end to the battle that had resulted in the complete inhalation of the troopers under Custer's direct command from Troops C, E, F, I and L. The lack of upgrades and improvements on the gun, and the very obvious indications of Native American use suggest that this gun was almost certainly recovered from the battlefield by the Natives and subsequently saw use against the soldiers that originally carried it into battle. Legitimate Native used, likely 7th Cavalry carbines are extremely rare and this is wonderful opportunity to acquire one of the most historically desirable guns from the Indian War period.

Good. Metal retains no finish with a mottled and oxidized gray patina showing scattered surface roughness and pitting. Markings remain legible in the metal, not in the wood. Mechanically functional, fair bore is heavily oxidized and moderately pitting along its entire length with weak rifling. Wood with moderate wear, scuffing, chipping and surface mars. A 3" piece of wood is missing from the obverse of the forend at the tip, and a few large dings and gouges are present in the wood as well.

CALIFORNIA & NEW JERSEY BUYERS: Due to recent changes to California and New Jersey law, we require all firearms, whether modern or antique, be shipped to a licensed FFL dealer. Please plan accordingly.

INTERNATIONAL BUYERS: Please note that Cowan's only ships firearms to a United States addresses regardless of antique status. It is the responsibility of the buyer to organize the export of their firearms to their country of residence. Cost of shipping to an exporter will be included on your invoice as the shipping cost, however the cost of exporting is solely the buyer's responsibility.