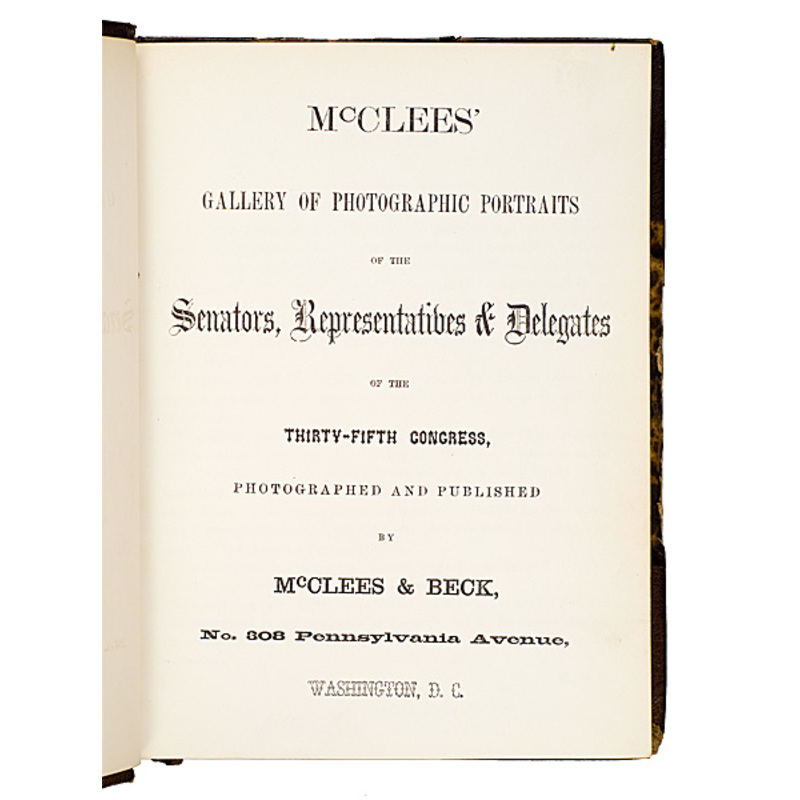 McClees, James, with photographic credit to his assistant Julian Vannerson, 1857-59. McClees' Gallery of Photographic Portraits of the Representatives of the Thirty-fifth Congress, Photographed and Published by McLees and Beck. Washington, D.C., 8vo, with marbled boards and half calf, with raised ribbed spine with gilt title; frontis with lithograph of the capitol. Title page followed by one page Preface, and four pages of index, then 311 pages, each with a salted paper photograph in vignette of each member of the 35th Congress, with a facsimile autograph of the sitter printed below.

An important and historic album of the major political figures of the years immediately preceding the Civil War, many of whom would leave civilian life to assume new roles as leaders for the Union and Confederate forces, and others, who would frame the social discussions of the day. Among the portraits included in this album are those of the future president of the Confederacy and virtually his entire cabinet; 12 future Confederate Generals, including William Barksdale, Albert Jenkins, and Felix Zollicoffer, who would lose their lives during the War, and no less than 10 Union Generals, including Daniel Sickles who would sacrifice a leg, and career, for the cause of the Union at Gettysburg. A host of portraits of important political figures complement these future military leaders. Included here are the figures that would dominate the news in the War years and beyond, including Lincoln's sparring partner, Stephen Douglas of Illinois; Hannibal Hamlin, his first vice president; Andrew Johnson of Tennessee, vice president in the second term, and future president; William Seward of New York, Lincoln's greatest rival for the 1860 nomination, but who would become his greatest supporter as secretary of state; Simon Cameron, Lincoln's first secretary of war, who would resign in a cloud of charges of incompetence; Charles Sumner of Massachusetts, the abolitionist agitator; Clement Valandigham, the Copperhead of Ohio who Lincoln would exile to Canada for his traitorous invectives against the War; the aged John J. Crittenden of Kentucky, who tried but failed to hold the Union together; Schuyler Colfax, future vice president under the War hero Ulysses S. Grant; and Sam Houston of Texas, shown in a rare portrait sporting an enormous mustache.

While McClees is known to have produced albums and portfolios of important personages, this is the first such Congressional compendium that we are aware of, and indeed could find no institutional holdings of a single copy. McClees clearly produced the volume for sale on a subscription basis, and in his preface announced his intention to produce volumes containing portraits of subsequent sessions of Congress. Unfortunately, it was a project that was likely doomed from the start; a combination of photographic innovations and the huge demand for photographs of soldiers and citizens brought on by the Civil War were the root causes. His album was exceptionally costly to produce; 311 individual salted paper photographs were needed for each volume.

These costs were only magnified with the introduction of the carte de visite style of photograph from France in the late 1850s, and the subsequent development of multiple lens cameras capable of making a dozen useable images on a single glass plate negative. Once War was declared, the carte de visite became the single most dominant photograph type made between 1860-65.

While it is impossible to guess that this may be the only surviving copy of McClees' Congressional Portrait Gallery, clearly not many were ever produced. A number of the portraits here are exceptionally rare, including that of an aged Sam Houston sporting a bushy mustache and William Barksdale of Mississippi who lost his life at Gettysburg in the assault on the Round Tops. The negatives of other portraits, including those of Jefferson Davis and virtually the entire Confederate cabinet, are the basis for the images issued by the New York firm of E. and H. T. Anthrony as cartes de visite during the Civil War. While it is well known that Anthony purchased negatives from Mathew Brady, it now is apparent that they also used negatives made in the McClees studio expressly for his Portrait Gallery.

Condition:EXC. Complete save for 20 portraits. These appear in the volume as blank pages containing a facsimile signature lacking a portrait; these pages more often than not appear to be unsalted paper, suggesting that no portrait was ever on hand.