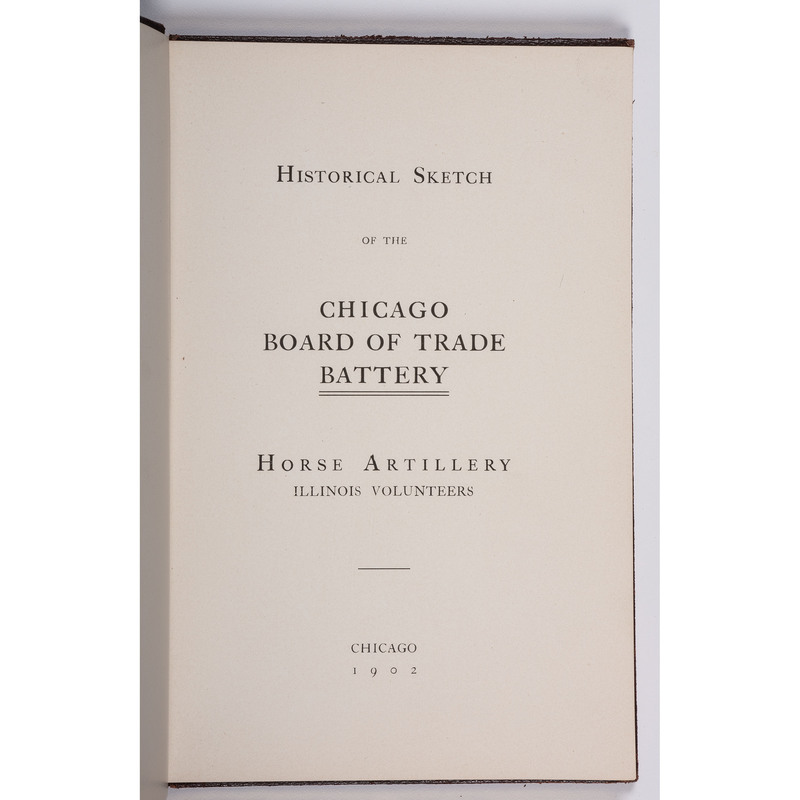 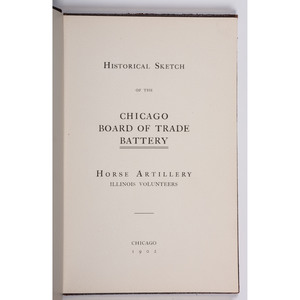 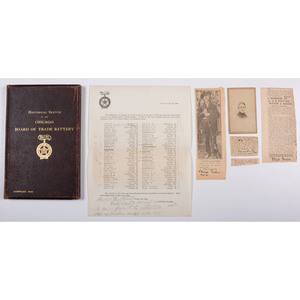 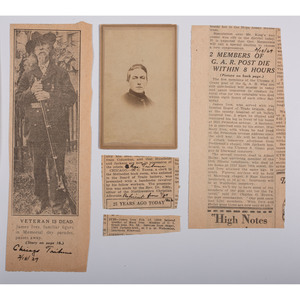 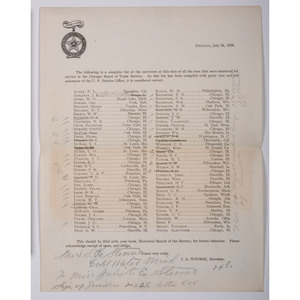 Historical Sketch of the Chicago Board of Trade Battery, 1902, Plus

Tucked into the front is a cdv with J.A. Nourse, Chicago Board of Trade Battery 2 in pencil on verso. Also a printed letter that begins: "The following is a complete list of the survivors at this date of all the men that were mustered for service in the Chicago Board of Trade Battery." and dated 1908 and signed in type "J.A. Nourse, Secretary."  There are a few newspaper clippings tucked into the folded letter, most having to do with the death of James Ives in 1929. Many of the names in the list have been checked or crossed out, presumably as the owner kept records of the veterans as they died.

The Introductory pages relate that the need for this book became apparent when all official Illinois records of this unit (and presumably many others) were lost in the Great Chicago fire and plus a subsequent smaller one. So the records held by the US Government and by individual members of the unit were brought together for a durable record of this unit. They were one of the first units formed in response to Lincoln's call for 300,000 men July 6, 1862. The Chicago Board of Trade put up tens of thousands of dollars in bounty money and enrolled the 72nd, 88th and 113 Illinois Volunteer Infantry Regiments.

The Battery was "engaged in the great battles of the West," first at Lawrenceburg, KY then Dec. 20 it was attached to the Pioneer Brigade, participating in the battles of Stone River, Elk River, Chickamauga, Farmington, Dallas, Decatur, Atlanta, Lovejoy, Nashville and Selma. It also fought in other great battles of the Army of the Cumberland: Resaca, Kenesaw Mountain, Peach Tree Creek, Marietta, Vining Station, Noonday Creek, Stone Mountain and many small engagements, many occurring on raids, reconnoissance and outpost duty.

Moderate shelf wear to lower extremities and both spine ends. Some wear along the edges of the bevel. Internally it is fairly solid and clean, having been printed on heavier than usual paper.