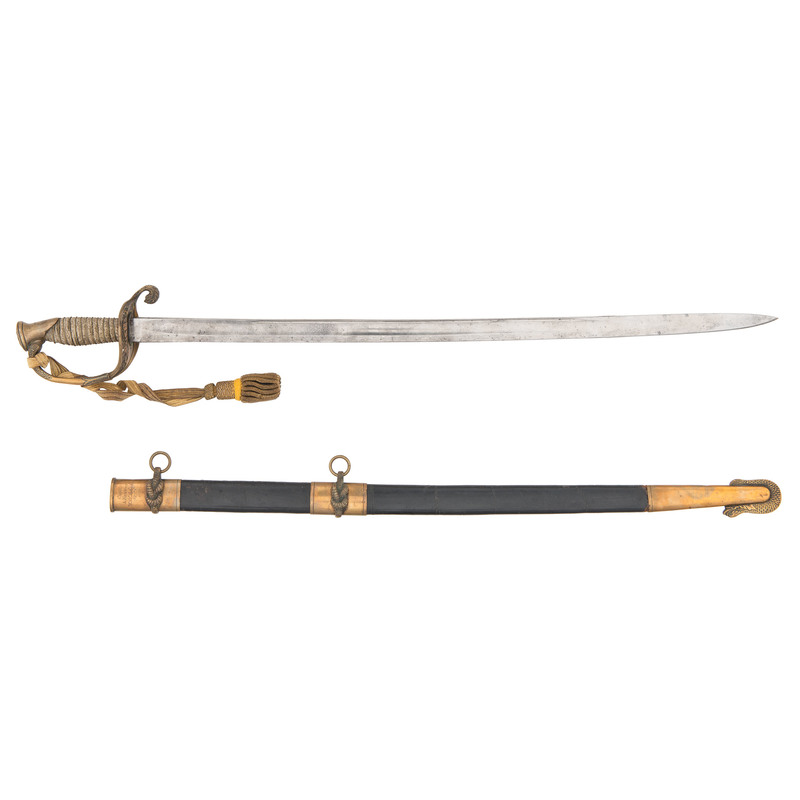 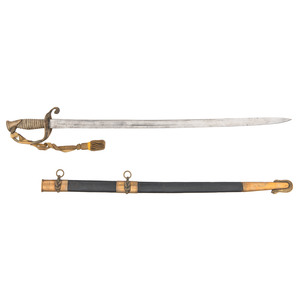 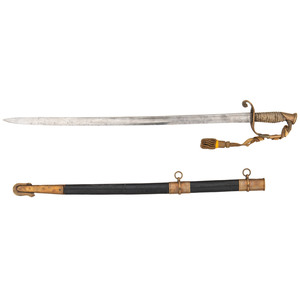 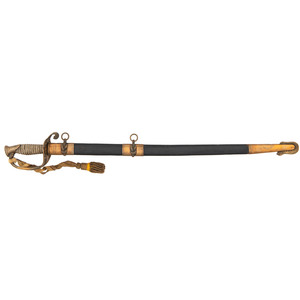 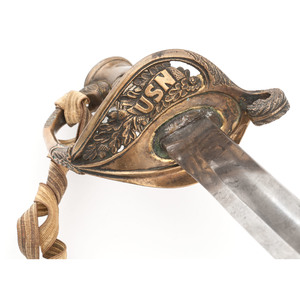 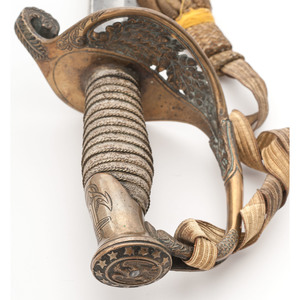 29." blade length with a single fuller and etched naval panels and floral designs. Shagreen and gilt brass wrapped handle.  Brass guard with floral designs and USN.  Engraved anchor on the face of the pommel. Leather scabbard with brass fittings wrapped with Naval ropes tied in knots, the drag has a serpent.  Engraved on the throat of the scabbard Cmdr A. Bryson USS Lehigh, USN 1863.

Rear Admiral Andrew Bryson (1822-1892) was a notable Civil War naval officer who commanded the Passaic class monitor USS Lehigh during a series of operations against Fort Sumter and the defenses of Charleston in the fall of 1863. Born in New York City, Bryson entered service when the legendary captains of War of 1812 fame still influenced the "wooden ships and iron men" traditions of the hide-bound sailing navy. Bryson was appointed Midshipman on Dec. 1, 1837 going aboard the USS Levant of the West Indies Squadron. He advanced to Passed Midshipman on June 29, 1843 and sailed in the frigate Macedonian and later the sloop-of-war Decatur, both vessels assigned to the Africa Squadron for suppression of the slave trade. Bryson missed seeing action during the Mexican War guarding the Great Lakes from British incursion on the experimental USS Michigan, the navy's first iron hulled steam powered warship. He was not promoted to Master until Jan. 1851 reflecting the frustratingly slow pace of advancement young officers endured. The junior sailing master then boarded the old USS John Adams then tied up at the Boston Navy Yard under extended refit. Taking six months of furlough for the first time in his career, Bryson was assigned to the converted store ship Erie as executive officer making several voyages out of New York to replenish warships of the African and Mediterranean Squadrons. Freshly promoted to Lieutenant in August 1851 he then went to the Brazilian Squadron cruising aboard the USS Relief, another store ship, and then transferred to the brig USS Bainbridge as commanding officer. Bryson returned to the eastern seaboard in December 1853 and mustered on the receiving ship Ohio moored in Boston. His next assignment was the sloop Saratoga in the Home Squadron for a year followed by another stint as executive officer of the receiving ship Ohio, there being more available officers than command billets as strict seniority was a time honored tradition. In October 1858 Lieutenant Bryson departed Hampton Roads aboard the sloop USS Preble destined for Commodore Shubrick's punitive expedition against Paraguay precipitated by the earlier Water Witch affair. By the time the battle-ready American squadron arrived on station the crisis had been averted without the need for force.

With the outbreak of the Civil War Bryson found himself shore bound on duty at the New York Navy Yard. While the navy underwent a rapid expansion Byrson waited for orders until October 1861 before taking command of the brand new USS Chippewa, one of the "ninety-day gunboats" launched in September. Chippewa took station between Fort Monroe and Cape Hatteras and remained on blockade duty for eight months. On several occasions she bombarded Confederate shore batteries and assisted in the capture of the English blockade runner Napier on July 29, 1862, several weeks after Bryson had been promoted to Commander. Bryson commenced a second lengthy cruise in Chippewa in search of the Rebel raider CSS Florida, sailing to the Azores, Cadiz, Gibraltar, Madeira and the Cape Verde Islands before putting into Port Royal, South Carolina on May 30, 1863.

In August 1863 Commander Bryson took command of the Passaic-class monitor USS Lehigh and certainly acquired this sword prior to steaming out for duty with the South Atlantic Blockading Squadron off Charleston. Bryson was captain of Lehigh for eight high intensity months through April 1864 during which time the warship engaged in close bombardment of Fort Sumter (Sept. 1-2), Sullivan Island (Sept. 7), and Fort Moultrie (Sept. 8). Lehigh sustained 29 hits from Fort Moultrie's gunners on the 8th and the next day covered a naval landing party assaulting Fort Sumter. The intrepid small boat action was driven away with "disastrous small arms fire" and suffered 125 casualties. In tandem with USS Patapsco, the Lehigh kept Fort Sumter under sustained bombardment from Oct. 27 to Nov. 20; the symbolism of the crumbling brick fort - the crucible of the war - was not lost on the practiced navy gunners. It is reported that during one of the aforementioned actions Commander Bryson was wounded by a "shell fragment." On November 16 Lehigh ground fast on the flood tide off Sullivan Island, well within the range of Rebel batteries. Heavy fire commenced as USS Nahant responded to the signal for assistance. Over the next hour - in the face of sustained cannonade - a concerted effort was effected to pass tow lines and pull Lehigh off. A sitting duck, the ironclad was struck 22 times by shot, "nine of which are wounds on the deck plating, and these are the most serious of all the wounds she received," reported Commander Bryson. Incredibly, just seven crewmen were wounded. Five of Lehigh's ratings were later awarded the Medal of Honor for their heroism on November 16, 1863. After repairs at Port Royal, Lehigh rejoined the fleet off Charleston on January 13, 1864 assigned to picket duty with intermittent trips to the gun line. The accuracy of Lehigh's gunnery was displayed on February 4 when at a range of "2,400 to 2,500 yards" the ironclad's 8-inch rifle scored numerous hits on a blockade runner anchored near the shore of Sullivan's Island causing it "to burn until late at night." Commander Bryson was relieved on April 5, 1864 and later took command of the ironclad USS Essex assigned to the Mississippi Squadron in October.

After the war Commander Bryson was promoted to Captain on July 25, 1866 and returned to command the USS Michigan. Bryon was advanced to Commodore on February 14, 1873 alternating between shore billets and sea duty. Forty-three years of uninterrupted naval service earned Bryson the rank of Rear Admiral on March 25, 1880.

On the cusp of a technological resurgence, the venerable Admiral Bryson was consigned to the navy's retired list on January 30, 1883. Admiral Bryson (MOLLUS #08410) died in Washington, D.C. on February 7, 1892 and was buried in Greenwood Cemetery, Brooklyn.

Accompanying the sword are photocopied extracts of Bryson's Reports to the Navy Department during his years in command of Chippewa and Lehigh.

The blade has some light staining, mostly gray metal with thin etched panels. Leather scabbard has some aged cracking, brass fittings with nice patina. The handle has light wear.  Pommel and guard with nice even patina. Overall very good with this great presentation to a person of steadfast service for more than four decades during some of the most difficult days of the nation.