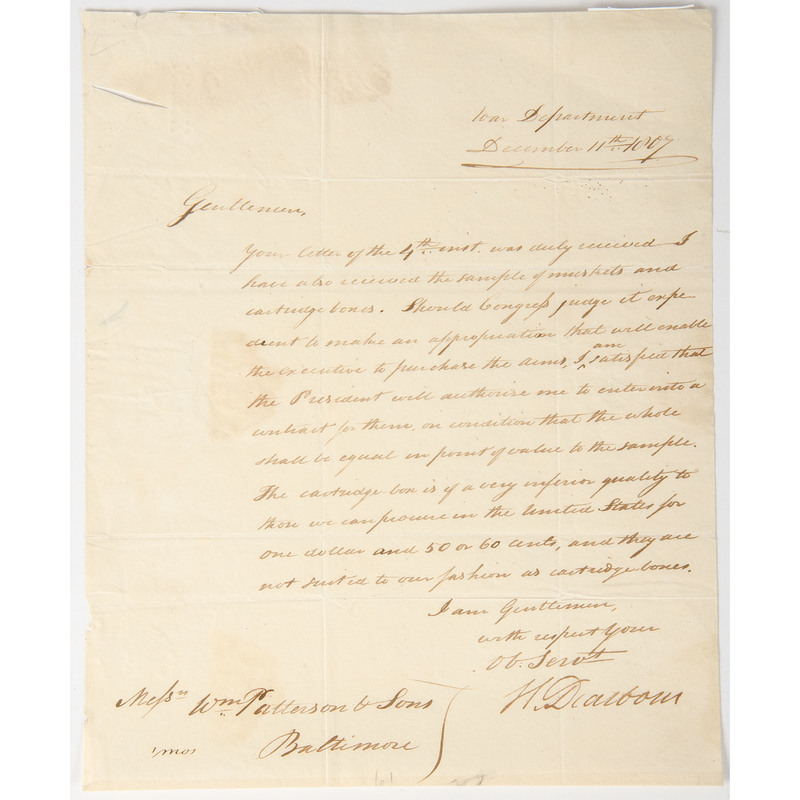 Dearborn's letter first acknowledges his receipt of a letter and a sample of muskets and cartridge boxes from his intended recipients. He then goes on to predict that, should Congress make an appropriation for the purchase of arms, he would receive authority from the President to "enter into a contract for them, on condition that the whole shall be equal in point of value to the sample." He then notes that the quality of the cartridge box is wanting, in comparison to those that can be purchased in the United States for around $1.50 or $1.60.

Henry Dearborn's was a military life. Though he was practicing medicine at the outset of the American Revolution, he quickly joined the American Army and helped his fellow colonists win victory over the British. His Revolutionary War service was dotted by many of the remarkable events and turning points of that conflict, including the Battle of Bunker Hill, the Siege of Fort Ticonderoga, the Battles of Saratoga, the long winter at Valley Forge, and Cornwallis's surrender at Yorktown. After the war, Dearborn was elected to two terms in the House of Representatives, serving from 1793-1797, and thereafter was appointed as Thomas Jefferson's Secretary of War. He served in this capacity for the duration of Jefferson's Presidency, from 1801-1809. Once the War of 1812 began, Dearborn was called into service, being appointed a Senior Major General in the US Army. It was his performance during this conflict, however, that would unfortunately define Dearborn's career from that point on. Due to his lackluster performance in the northeast, and his failure to reinforce Brigadier General William Hull in Detroit (leading to Hull's surrender of the city), the major general was called away from the field and assigned to an administrative command in New York in July of 1813. Though he was honorably discharged in 1815, the legacy of his ineffectual leadership during the War of 1812 kept him from reappointment as Secretary of War under James Madison.

Born and raised in Ireland and transplanted to the United States at the age of 24, William Patterson (1752-1835) was primarily known as a businessman, though he also served as a gun runner during the American Revolution. His various business ventures included founding the Baltimore and Ohio Railroad, helping found the Merchants Exchange, running the Bank of Maryland, and even founding the Canton Company with renowned inventor Peter Cooper.

Provenance:Deaccessioned Property of the National Society of the Sons of the American Revolution

Letter with creasing, at least one 1 in. rip contained within upper left quadrant, some discoloration, and wear to edges and corners.