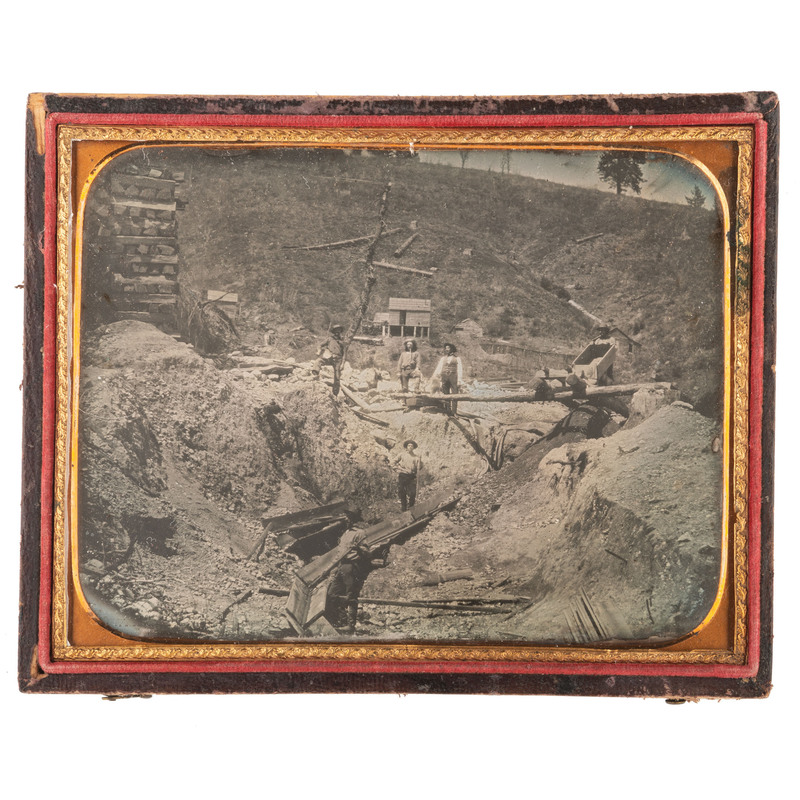 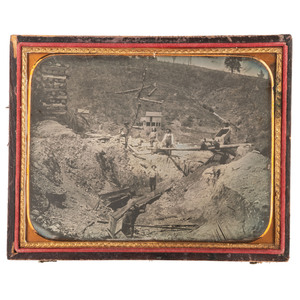 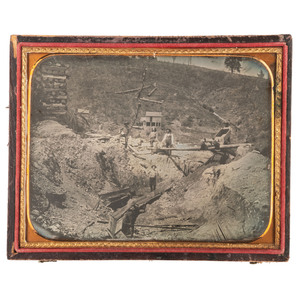 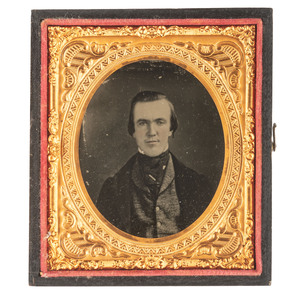 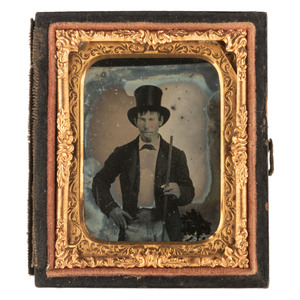 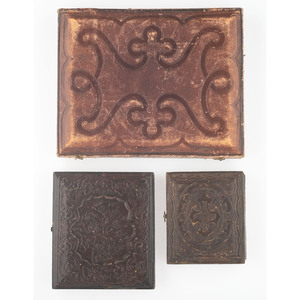 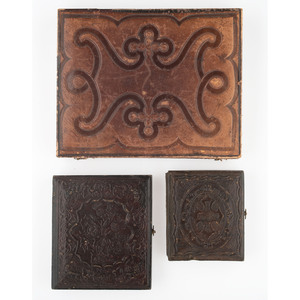 Half Plate Daguerreotype of a California Gold Mining Camp, with Portraits of Two Featured Subjects

Half plate daguerreotype of miners at Angel's Camp gold mine in Calaveras County, California. N.p., n.d., [1852]. Housed in leather case. Six men pose for the photographer at their mining site. In a large depression in the foreground, two men stand near a sluice with pitchforks and shovels. The man at center holding a shovel with his hand on his hip is identified as Peaty. Four men stand at the top of a ridge, one, identified as John Comstock (b. ca 1817), stands behind a sluice box tilted on a log frame. Visible on the left edge of the image is a rough-hewn log building. In the background is a wood board building on stilts with a small chimney. Three more board shacks dot the landscape behind the men. Inside of case, behind image an ink inscription reads: "Angles [sic] camp 1852 / John Comstock + Peaty" with an additional clipped note reading: "John / 1852 / Angles [sic] Camp." A 33-year-old John Comstock is listed as "miner" in Calaveras District in the 1850 Census. Two other men, H.M. Kearney and George Hildreth, both of Virginia and both also miners, are listed as sharing a dwelling with Comstock.

Angels Camp, a Gold Rush Era boomtown in Calaveras County, was founded by Henry Angell, originally from Rhode Island. He served with his brother George under Colonel Frémont during the Mexican War and the two were stationed in Monterey at the end of their enlistment in 1848. Hearing the rumors of gold, they traveled and arrived at Angels Creek where he set up placer mines. Henry would abandon the back-breaking labor of prospecting and open Angels Trading Post at the confluence of Angels and Dry Creek which became enormously prosperous selling general goods and mining supplies at reportedly inflated costs. Angels Creek and its tributaries were rich with gold and by 1849 it was estimated that several thousand miners had set up placers in the area.

The placers began to run dry but lode mining began in the 1850s along the Mother Lode, which coursed through Angels Camp. In 1854 an extensive gold-bearing quartz vein was discovered by the Winter brothers prompting a second gold rush. The rich Davis-Winters Lode ran up the main street of Angels Creek to the southern edge of Altaville and would support five major mines at its peak: Stickle, Utica, Lightner, Angels, and Sultana. At their peak in the 1880s and 1890s, over 200 stamps were working round the clock, producing more than $20 million worth of gold, some estimating as high as $30 million.

Half plate - Edge of lower left corner is slightly overexposed, else the image is remarkably clear and well developed. Conservator's tape seal suggests the image may have been cleaned. Case is split at the hinge with scuffs.