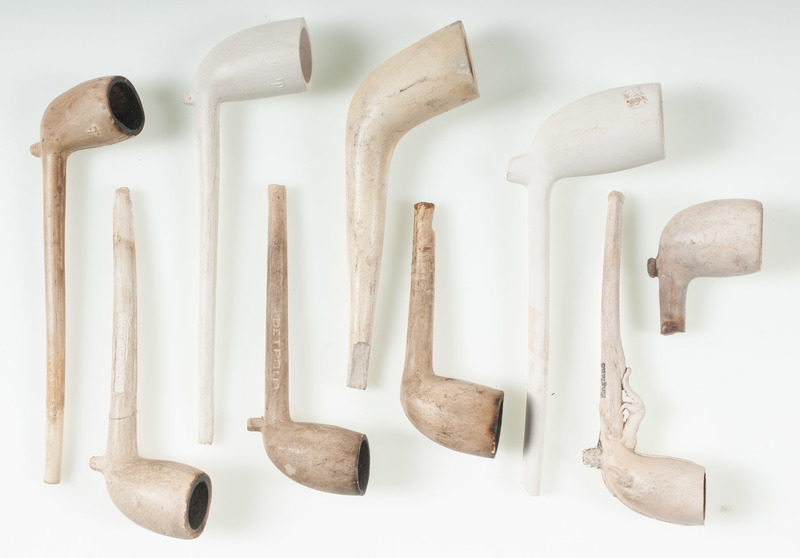 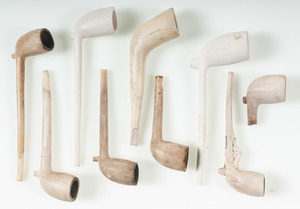 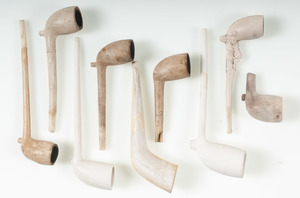 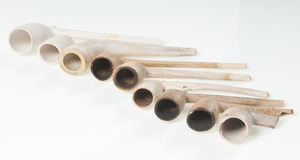 2: With dog along stem, vines around upper stem and bowl, ink stamp "Made in England"; possibly smoked. Also impressed mark not identified. Heel under bowl shaped like a berry.

3: Chips at stem end, rather large heel, not smoked. With mark like cellophane tape residue on stem.

6: Stem broken, but a fairly clean break (may have been used this way); impressed "O'Dwyer Bros." on one side of stem, "Detroit" on other side; heavily used.

8: Breaks around stem end, complete break near bowl which has been repaired, w/ heel, impressed "Scotland." Possibly other markings, indistinct. Light use.

9: Heavy pipe, with smooth profile (i.e., no heel). Short stem with a large chip at the end.

"T.D." is thought to refer to Thomas Dormer, a pipe maker from the mid-1750s to about 1780. These were so widely sold that "T.D." came to refer to a style of pipe and examples with this marking are found well into the 19th century.

In 1891 the United States mandated that all imported items be marked with their country of origin. Occasionally some were marked before this, however. Thus the pipes with no identification likely date before this, but the three with identification may or may not date after.