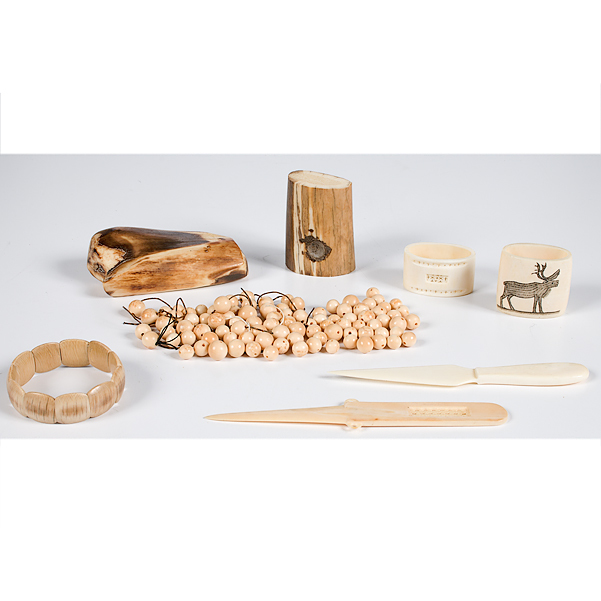 lot of 8, including two napkin rings, one with open-work decorations and second with incised elk, each 1.75 in. wide; PLUS two letter openers, one with similar open-work on handle, length 6.25 in. and 6 in.; PLUS fossilized ivory (possibly mastodon) bracelet, diameter 2.25; PLUS a broken string of spherical fossilized ivory beads; AND two pieces of fossilized ivory, lengths 2.5 in. and 14 in.

Leigh Robinson was born in Cedar Falls, Iowa, the son of a contractor, and graduated in 1904 from the Iowa State Teacher’s College with a Master’s of Didactics. Teaching first in Iowa, and later in Montana and Washington State, he joined the U.S. Customs Service, serving first in Seattle and then from 1907-1917 in Blaine, Washington.

As a child, Robinson became intrigued by the work of Sheldon Jackson, a Presbyterian missionary dedicated to the well-being of Native Alaskans. He followed his life-long dream north in 1928 when he accepted the position of Superintendent of Schools for the Seward Peninsula District, and relocated to Nome, living there with Christine and their three children until 1934 when the family moved to Klawock (1934 -1940) and Hoonah (1941- 42), The family returned to the lower 48 in 1942 when Leigh became Chief Clerk for the local War Price and Ration Board in Bellingham, Washington.
During his sojourn in Alaska, Leigh’s primary role was as an educator, but he was also charged with supervising work on federal property, construction of new school buildings, managing reindeer herds, organizing local elections, and helping with the adoptions of native orphans. Christine also taught primary classes during their stay in Nome and Klawock. Her Eskimo name was Analoatuk, “the kind lady.”
Both the Robinsons were actively interested in preserving native arts and crafts and organized the Northwest Alaskan Fair, which awarded prizes to students for outstanding work.