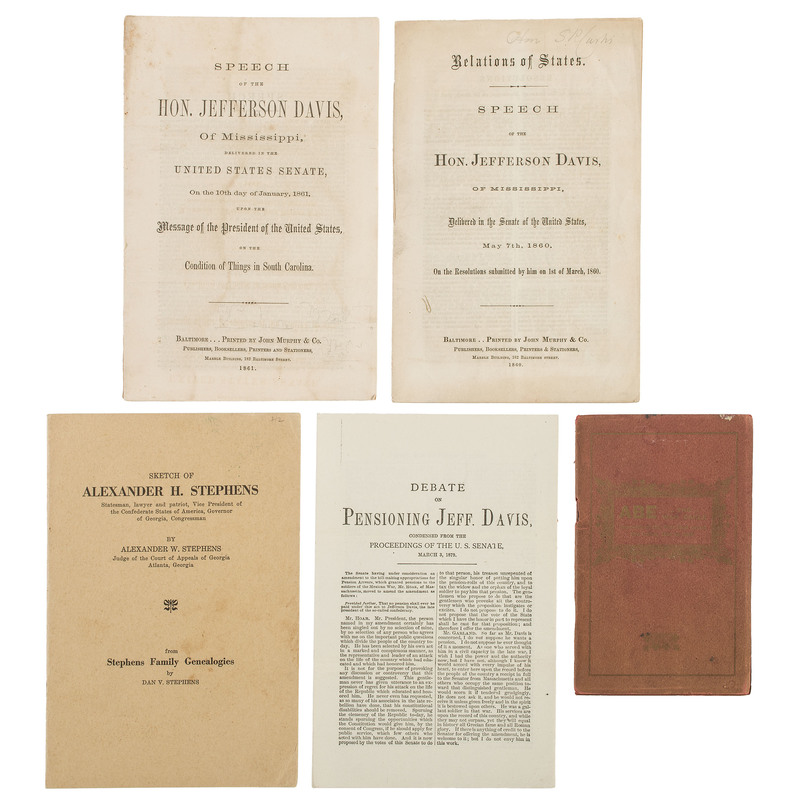 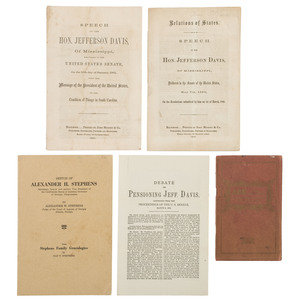 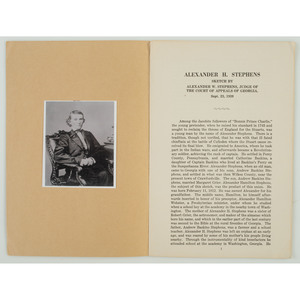 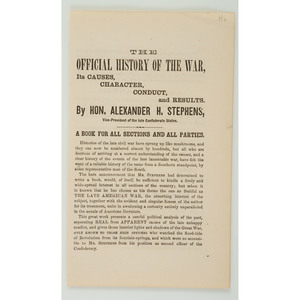 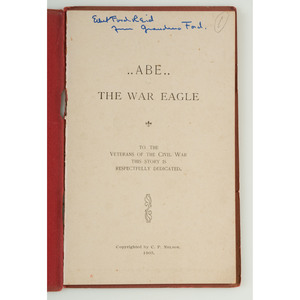 With publisher's ad for "The Official History of the War, Its Causes, Character, Conduct, and Results. By Hon. Alexander H. Stephens." 2pp, with a call for agents to sell this book and directs interested parties to offices of National Publishing Co. in Philadelphia, Cincinnati, Chicago, St. Louis and Atlanta. This book is probably "A Constitutional View of the Late War Between the States; Its Causes, Character, Conduct, and Results, presented as a series of colloquies at Liberty Hall [the Stephens homestead]" because of the subtitle. It was published in two volumes, 1868 and 1870. The publishers note that of the many histories springing up about the war, "...[we] have felt the want of a reliable history of the same from a Southern standpoint, by some representative man of the South."

Lot of 3. Davis, Jefferson (1808-1889). Speech of the Hon. Jefferson Davis, of Mississippi, Delivered in the United States Senate, on the 10th day of January, 1861, upon the Message of the President of the United States on the Condition of Things in South Carolina. Baltimore: John Murphy & Co., 1861. 8vo, self-wraps, 16pp.

South Carolina had seceded just three weeks before (December 20). In this speech, Davis asks why there are Federal troops at the Charleston Harbor forts. He notes that there has been no direct threat to government properties, yet "...[The Government] is now furtively sending troops to occupy positions lest 'the mob' should seize them....Fort Washington is garrisoned by marines sent secretly away from the navy-yard at Washington. -Fort McHenry, too, has been garrisoned by a detachment of marines, sent from this place in an extra train, and sent under cover of the night, so that even the mob should not know it....Then what is our policy? Are we to drift into war! Are we to stand idly by and allow war to be precipitated upon the country?

...On the verge of war, distrust and passion increase the danger. To-day it is in the power of two bad men, at the opposite ends of the telegraphic line between Washington and Charleston, to precipitate the State of South Carolina and the United States into a conflict of arms without other cause to have produced it...

And still will you hesitate; still will you do nothing. Will you sit with sublime indifference and allow events to shape themselves? No longer can you say the responsibility is upon the Executive. He has thrown it upon you. He has told you the responsibility now rests with Congress' and I close as I began, by invoking you to meet that responsibility, bravely to act the patriot's part. If you will, the angel of peace may spread her wings, though it be over divided states; and the sons of the sires of the Revolution may still go on in friendly intercourse with each other, ever renewing the memories of a common origin;...Thus may it be; and thus it is in you power to make it."

Reportedly Senators on all sides of the political spectrum were moved by Davis' speech.

Davis, Jefferson. Relations of States. Speech of the Hon. Jefferson Davis, of Mississippi, Delivered in the Senate of the United States, May 7th, 1860. On the Resolutions submitted by him on 1st of March, 1860. Baltimore: John Murphy & Co., Printers, 1860. 8vo, self-wraps, stitched spine, 15pp. Davis had laid out seven resolutions on the first of March. These focused on States' rights and the importance of slavery which "composes an important portion of their domestic institutions, inherited from their ancestors." He also took up the issue of Territories, arguing that they belonged to ALL the states, not the Federal Government, but the government should protect constitutional rights in a Territory. And rather than deciding slave or free BEFORE a territory becomes a state, it should become a state then its people decide the issue. The speech of May 7th expands on these resolutions, and compares the situation in 1860 with that in 1776 and the relations of states to Great Britain. He argues, among other principles, that there is no way, after the fight to shed English rule, that the states would give up their rights to a new government.

Debate on Pensioning Jeff. Davis, Condensed from the Proceedings of the U.S. Senate, March 3, 1879. Publisher and place unknown, presume Washington, G.P.O., 1879. 8vo, no wraps, 8pp. The Senate passed a bill regarding pensions for veterans of the War of 1812 and the Mexican War. Mr. Hoar (MA) proposed an amendment to the bill: "That no pension shall ever be paid under this act to Jefferson Davis, the late president of the so-called confederacy." (Even though Davis had served honorably in the Mexican War BEFORE he became President of the Confederacy.) Davis had never requested a pension, indeed, he had not even signed an oath of allegiance to the Union after his release from Fortress Monroe (and certainly the Senate would have required him to do that before receiving any Federal pension). Mr Garland notes: "He does not ask it, and he would not receive it unless given freely and in the spirit it is bestowed upon others." Mr. Thurman (OH): "...I am instructed by my Legislature to support granting pensions to the soldiers of the Mexican war. I do not read anywhere in those instructions that I am to except Mr. Jefferson Davis, nor do I see in their spirit that it is the opinion of the ...State of Ohio that the punishment of the people of the South ought to be vicarious in the person of Jefferson Davis. I do not anywhere see in those instructions that it is the desire of the people of the State of Ohio to single out Jefferson Davis and make him a martyr, while other men who went quite as far as he did are not only not punished but received into the highest stations of this Government." He goes on to name a few high ranking Confederates now in the US Government.

Booklet, "Abe," the War Eagle. Lynn (MA): C.P. Nelson, 1903. 4 x 6.5 in. Dedicated to the Veterans of the Civil War, and at times sold for their support. Red printed wraps, gilt lettering, 21pp. The story of "Old Abe," the bald eagle that went to war with the 8th Wisconsin Regiment. Abe was captured by "Chief Sky" of the Lac du Flambeau Ojibwe and sold to Daniel McCann of Eagle Point. In the recruiting of summer 1861, McCann was prevented from service by a childhood injury that damaged his legs. So he figured he could "serve" by giving the eagle as a mascot to the regiment being recruited in Eu Claire. The bird accompanied the 8th Wisconsin in at least 30 battles, coming through unscathed in spite of Confederate attempts to remove this mascot. He returned home with the unit in 1864 and lived with a series of keepers until exposed to smoke from a fire in the State Capitol in 1881, resulting in his death a month later. Abe was taxidermied and returned to the Capitol to be on display. Unfortunately, another fire in 1904 completely destroyed the building and "Old Abe's" remains.