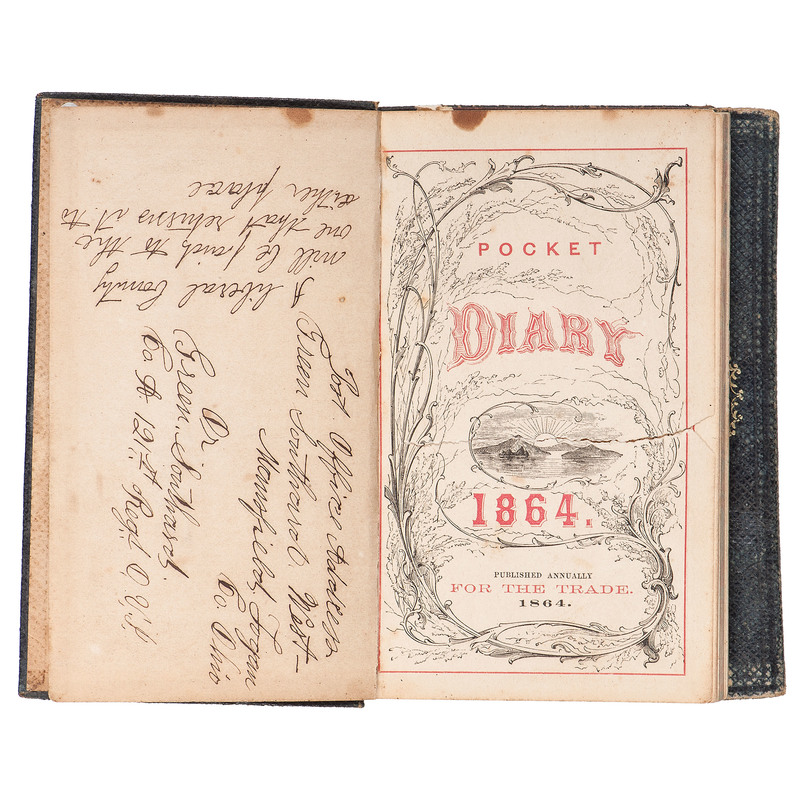 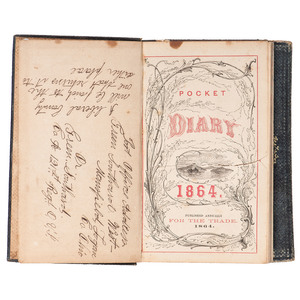 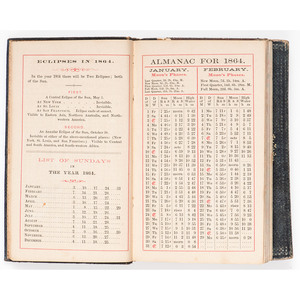 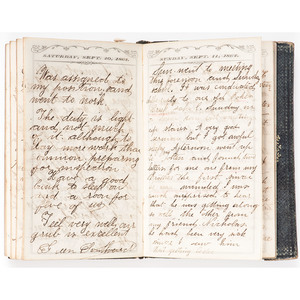 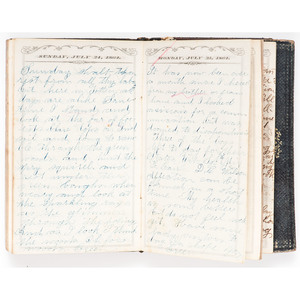 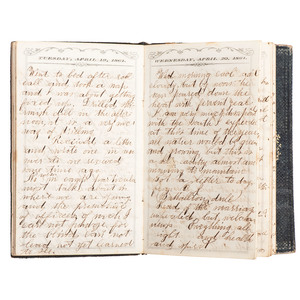 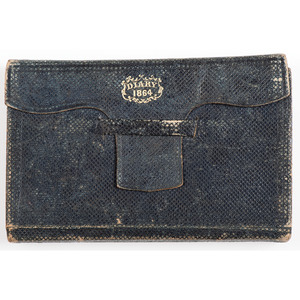 Pocket diary, 3 x 5 in., with leather cover and marbled page edges. Printed with only one day per page.

Green Southard enlisted in the 121st Ohio Volunteer Infantry as a 21-year-old private in February 1864. His brother, Wesley, was also in the 121st, having enlisted in the summer of 1862. Green began keeping this diary at the end of February and maintained daily entries until being wounded on December 14. Most days have some entry, but very occasionally he used an ink that has faded with time and is nearly unreadable.

The diary is a bit unusual in that Green was something of a dreamer. Many of his entries are almost poetic, and he often talks about just staring at the stars or the woods while on picket/guard duty. It is probably fortuitous that he did not come under direct attack while on guard duty, since he may not have seen it coming.

March 18 (1864): "Saw the sun rise and as it came over the distant mountains with it[s] sparkling darts; it was sublimely beautiful Presenting a scene pleasing to the eye and instructive to the heart Be[a]utifying all nature and rendering a variety of scenery to man." In a few places he does insert poetry.

He does, however, describe the war. Mar. 13: "At 1 ocl. started for our Reg't. encamped near Rosville (??? of blacksmith shop). Had a view of Lookout Mountain and passed directly over Missionary ridge. Saw where some rebs had burried [sic] rebs and their feet were sticking out of the ground. Pass several camps where the rebs had been. No fences scarcely to be seen dead horses broke wagons show where the armies have been will be seen for ...years..."

By May the regiment had joined the Atlanta Campaign. He gives descriptions of individual battles we hear little about (although they did not have their historical names as yet): Battle of Tunnel Hill (May 6), Rocky Face Ridge (May 7-13), Dallas (Georgia) (May 28). Into June they pass "Lost Mountain" and engage in the Battle of Kolb's Farm (June 22). He confirms the death of Leonidas Polk on June 15.

May 6: "...Received order to be ready to march at daylight with three days cooked rations. In the evening we were drawn up in line and told what was our supposed destination. To take Tunnel hill on the morrow or try it..."

May 7: "Up at three preparing to move. Moved at dayligh[t]. Our division in front and our brigade and our Regt second in front. Two miles and firing commenced We moved very slow till within a short distance of the fill, formed in three lines of battle and moved upon the hill. Our Co. was thrown out a skirmishers. But the rebs retreated. We marched a short distance further and encamp..."

May 28: " Some cannonading to day and some were thrown at our slight work but did not hit. About 4 1/2 PM a drum beat and every man was immediately at his place. The enemy were moving apparently to our left but really to our right and made an attack with fury. But were repulsed. About 6 we moved further to our left and built works of defense out of rails. Laid as usual with ca[r]trige box on and gun close by my side. Some firing along the line during the night."

During the summer he becomes ill and spends some time in the hospital. He was apparently helpful there because a friend got him detailed to the Officer's Hospital for part of September. In August his brother was wounded, but taken to a different hospital, although he came to the Officer's Hospital shortly after Green returned to his unit. In early October Green returned to the regiment but was still classed as unfit for field duty. This caused a bit of boredom and anxiety. Many times he was the only one left in camp with no duties and no one with whom to talk. He seems to have gradually worked his way back in. By November he is on the fighting line.

November 30: "Daylight found us at the foot of the mountains awaiting help to get over. Crossed the mountain to Cowan(?) Station and got off. Formed in line of battle along the RR. Stacked arms. Just as we got fixed to sleep for the night the word - fall in came; got aboard the cars and remained till day light. Find the reason why."

December 1: "Soon after sun up we started in the direction of Nashville. Found the Block house Station deserted and troops moving in direction  of Murfresboro no telegraph wire cut Stoped a while in Mur. and then for Nashvill wich we made without anything occuring. Camped in front of a battery. Rained." December 2: "Put up tents after the rain was over and soon had to pull down. Went out about a mile formed in two lines and put up one line of works. Picket firing commenced and some artillery in the direction of Murfersboro but no news from there. Some rebs wer visible...". December 3: " Rolled out at 11 AM and stood in line till day light amidst wind and rain and I shook considerably....Fort Negley spoke a few times. No musket firing near..." December 4: "Strengthring [sic] our works. We have very good ones....Some skirmishing and cannonading on our left and front but no sign of an attack from Hood neither do I belive he intends to do so." December 5: "Made a line of pickets (sharpened sticks stuck in the ground) and a line of brush work in our front twenty and fifty steps from the main line. Saw something of Gen. Steadman that I did not like. If he can manage an army he can not his own temper and he that governs his own temper so great than he that gaineth a victory."

Just over a week later Green was wounded in the left shoulder, and the diary stops. He would eventually be discharged for disability, but not until June 1865, after a few surrenders were signed.

An unusual reporting style from the front that one does not often see.

Other than very light ink in places, the diary is in good condition. It saw less "field time" than many others. The pages are very thin, at times allowing the ink from one side to make the other side difficult to read.