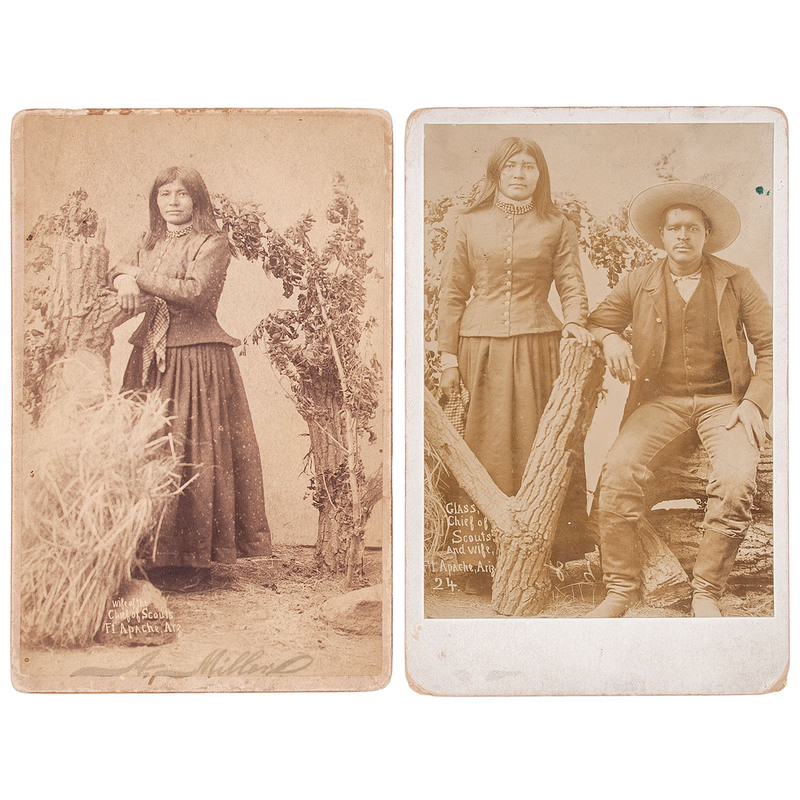 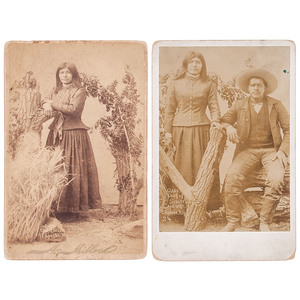 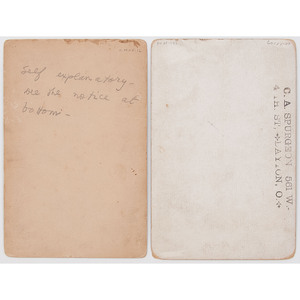 Glass, Chief of Scouts, and Wife, Ft. Apache, Ariz. 24. Uncredited but almost certainly [Andrew Miller]: [Globe, Arizona Territory], circa 1886-1887. Stamped to verso "C.A. Spurgeon 561 W. / 4th St., Dayton, O." Glass is seated on a faux log wearing a hat as his American Indian wife, presumably Apache but not identified further, stands at his side, their arms resting on another log.

Wife of the Chief of Scouts Ft. Apache, Arz. A. Miller: Ft. Apache, Arizona, n.d., circa 1886-1887. Imprint on recto. From the same sitting, Glass's wife stands wearing a European-style skirt and bottomed blouse, resting her crossed arms on a faux tree stump.

John T. Glass was born in Polk County, Georgia, and enlisted with the 10th Cavalry in Atlanta in 1876. He is known to have been at Fort Apache during 1887, though was likely there earlier and later as well. He is listed on the voter registers for Apache County, Arizona on October 5, 1888, and September 20, 1890. He and his wife had a son and daughter, and he applied for disability compensation in 1902 because of damaged hearing. He was deaf in both ears by the time he died in 1908. In February 1891, for reasons unknown, Glass shot and killed a Sergeant George Foster. Records do not indicate any wrongdoing and the incident remains a mystery.

The cavalry troops in Arizona Territory and Fort Apache were heavily involved in the Apache Wars and Andrew Miller was one of the principal photographers at the time. He was from Silver City, New Mexico, was known to be active in Globe, Arizona near Fort Apache in 1886, and later worked in Bisbee in 1897. He was killed by Yaqui Indians on August 3, 1899, in Sonora, Mexico. While Miller is well known for his photographs of Apache Indians, these two images are very rare.

Although others have attributed the image to George Benjamin Wittick, it was almost certainly taken by Miller. The second cabinet card, with Miller’s imprint, is from the same sitting, with Glass’s wife wearing the same outfit, necklace, and kerchief. Additionally, the only other known copy of this image bears Miller’s imprint identical to the one seen in the portrait of Mrs. Glass here.

Two other images of Glass are known to exist – White Mountain Apaches and Renegade Negro and Glass, Chief of Scouts, Fort Apache, Ariz. The former shows a standing Glass in buckskins with two Apache scouts amidst studio cacti and the latter shows Glass alone against a different backdrop, armed with an 1878 Colt double-action revolver. (See Kareem Abdul-Jabbar. A Season on the Reservation. My Sojourn with the White Mountain Apache for the author’s pursuit of information on Glass).