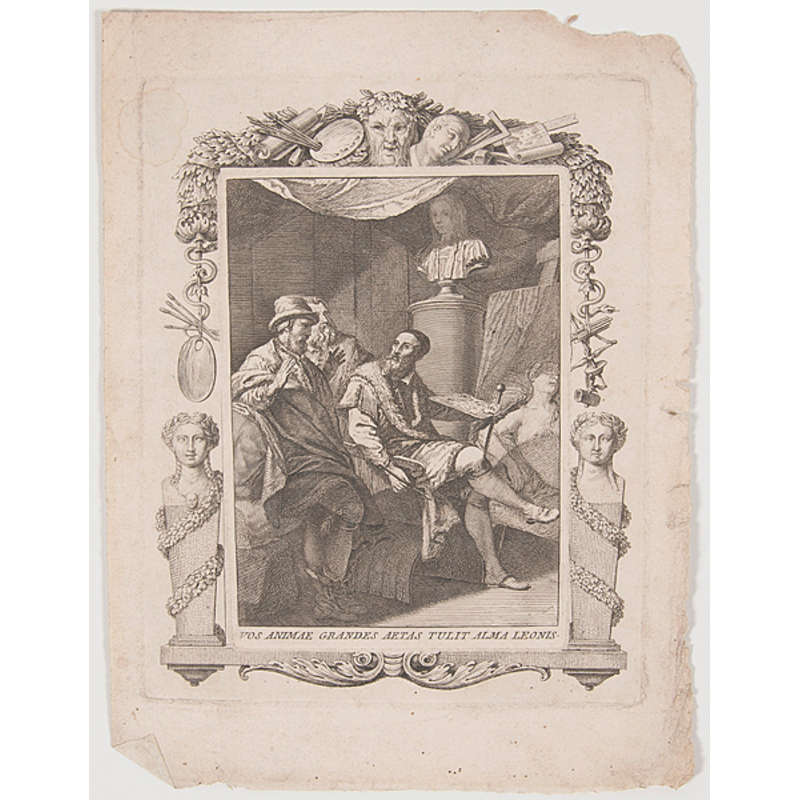 Continental, 17th-18th century. An assembled group of nine genre etchings and engravings, including Vos Anime Grandes Aetas Tulit Alma Leonis by Nicolas Vleughels (French, 1668-1737), on laid paper; one scene of travelers on a path with a church in the distance, marked DH l.l., on laid paper; one scene of a man kneeling before two angels in a town street, unmarked, on laid paper; one scene of travelers outside a city marked for Jeremias Wolff (German, 1663-1724), and marked Perelle Invent and R.C. Hafner sculp. l.l., and N.4 l.c., on laid paper; one of a sailboat passing by ruins on shore marked for Johann Cristoph Nabholz (German, 1752-ca.1796) after Gottlieb F. Riedel (1724-1784), on laid paper; one scene of travelers by a river, marked bey Liechsfahl u.r., on laid paper; one Vue de la Chapelle batie a l'Endroit ou Guillame Tell tua le Gouverneur Gessler marked for Bartholomé Fehr (French, 1747-1811) l.r., on laid paper; one town scene during winter, marked Lanvarius u.r., on laid paper; and one Rorbach bey Heydelberg, marked Pet. Aub. Ex. l.c., on laid paper; all unframed; largest 12 x 8.75 in. (Fehr plate), 13 x 9 in. (Fehr paper).
From The Old Master Print Collection of Johann Petz (Germany, 1818-1880), Descended in the Family of the Artist
Petz was born at Lermoos, Tyrol, in 1818 and showed an early interest in wood carving and drawing. Petz worked as a shepherd for his family as a boy, but fled as a young man to a distant relative in Wildermiemingen  to pursue the study of sculpture and drawing, which he did for three and a half years. In 1837, he decided to further his studies in Munich, and by chance he came into contact with the sculptor Konrad Eberhard (German, 1768-1859). Eberhard recognized Petz’s talent and took the young man on as a pupil, and several years later, secured for him a commission for the memorial statue for the famous German scholar Heinrich Klee (1800-1840). Petz’s design outlined a Gothic niche surmounted by a pinnacles and finials, which would house a sandstone sculpture of the Good Shepherd. This marked the beginning of the young artist’s career and established his reputation in Munich.
Petz was influenced by Nazarene and Neo-Gothic movements in Bavaria, otherwise known as the Pre-Raphaelite movement in England. Petz would also go on to receive commissions for churches, altars, and tombstones in England and the United States, and was highly sought after as a sculptor and church designer. Several locations for which he designed churches and their decorations are Cham, Arnschwang, Seeon, Vilsbiburg, Isen, and Riedering. Most notably, he contributed the design for a sculpture of the Last Supper for the Frauenkirche in Munich in 1859, which was regrettably lost in air raids during World War II.  During his career Petz also worked with Joseph Otto Entres (Germany, 1804-1870) and Joseph Knabl (Germany, 1819-1881).

Each shows signs of fading, toning, and wrinkling of paper. Adhered to backing include: man with angels, bey Liechsfahl, Lanvarius, and Rorbach bey Heydelberg. Water stains and other stains present on most. Fehr has several tears in paper on left side and l.c.

For condition inquiries please contact cleveland@cowans.com.
Please note that a condition report is only an opinion, given as a courtesy, and should not be treated as a statement of fact. Cowan's Auctions shall have no responsibility for any error or omission.
Estimate: $100 - $200
Price Realized Including Buyer's Premium
$30
09/17/2016