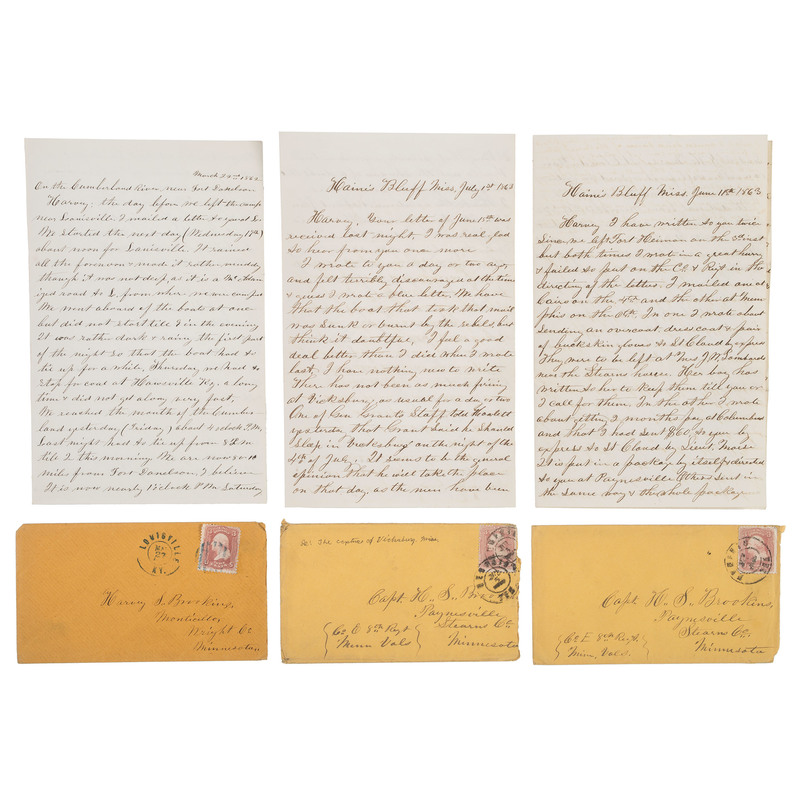 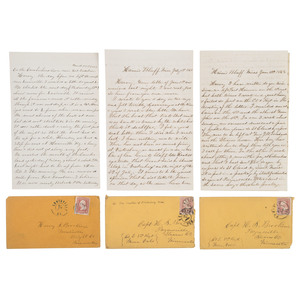 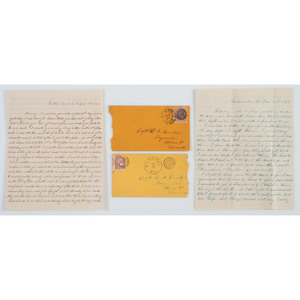 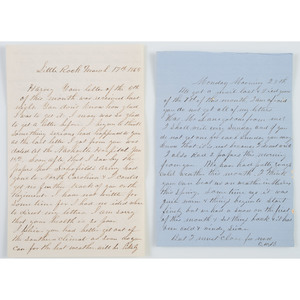 The letters from George to Harvey offered here span nearly the entirety of the Civil War starting in November 1861 with the last letter present dated July 23, 1865. The archive begins shortly after George enlisted with the 3rd Minnesota on October 24, 1861. George recounts being elected corporal in a letter dated November 14-15, 1861, “I thought at first that I would not accept the office, but I thought it over + made some inquiries + found that it would relieve me of a good many duties + I concluded I would accept.”

George writes vividly of camp life and recounts with wit some of the frustrations such as lost mail and late pay remarking in a letter dated January 20, 1862, “I shall send it back to him as soon as we get our pay - when that will be the Lord only knows. It has been “next week” for a long time.” Another continual annoyance was the quality of the guns they received. He writes of his first gun in a letter on November 26, 1861 that “they are a kind of rifled musket imported from Germany, + the most miserable things.” Things improved only slightly when on February 21, 1862, “We have all been out and got our guns - they are the “Austrian Rifles” [they] are very good looking guns, but not as good as the Springfield guns.” Finally, in a letter on February 18, 1863 he happily reports, “We have Enfield Rifles - they are splendid guns. I think they are full as nicely finished guns as the Springfield. I do not know how they will shoot, but I think from their looks they will shoot first rate.”

Despite these irritations, George seems to have greatly enjoyed army life, writing in March 1862, “There are many things about a soldier’s life that are not very pleasant, but I think on the whole I enjoy myself as well as I ever did in the same length of time in my life.” The regiment appears to have represented themselves well and gained the attention of Andrew Johnson (1808-1875), then military governor of Tennessee. George writes on April 25, 1862, “ I heard that he said we were doing more for the Union by staying here in Nashville + showing the people by our good behavior, that we are not the barbarians that they represented us to be.” In a letter the next day, when he was about to deploy towards Murfreesboro, George attempted to reassure and put Harvey’s mind at peace writing, “we have but one life to live + we may as well enjoy that as well as we can.” (April 25, 1862)

Early in 1862 while camped near Louisville, KY, George complains to his brother about a certain Andrews who “has lost favor with the company very fast lately. I think there is hardly a man in the company now who speaks well of him… it is very evident that he is seeking promotion + does not care how he gets it.” The Andrews in question was Christopher Columbus Andrews (1829-1922), who did earn several promotions, eventually rising to the rank of brigadier general and brevetted as a major general near the end of the war. George encounters Andrews again around the time he was promoted to brigadier general, with George’s opinion much changed. In a February 18, 1864 letter while stationed in Little Rock  he writes, “Col. Andrews it is said will stay here and hold his present position as Commander of the Post, and I think will do all he can for the men of the 3d...he has been very good to the men of the 3d. Getting them detailed to fill a great many clerkships +c. He got a very good place for me on the 9th of this month. He detailed me as agent for Refugees."

George writes often about the progression of the war including the defeat of General Zollicoffer (1812-1862) and the capture of General George B. Crittenden (1812-1880)  at Mill Springs, KY (January 20, 1862, February 11, 1862), the evacuation of Bowling Green, KY and the Union fleet attacking Fort Donelson (March 8, 1862), a particularly detailed description of Fort Donelson in the near aftermath of the battle (March 22-3, 1862), and vivid details of Grant’s assault on Vicksburg when stationed at Hayne’s Bluff, Mississippi in June and July of 1863, “about all we know is that it is not taken yet and that Grant is bombarding the place like the Devil day + night.  This we know for about every minute we can hear the mortar boats + siege guns open on the city which fairly makes the earth tremble.”

While stationed at Little Rock from January 1864, George’s letters become less frequent and he begins to contemplate life after the war, writing in July 1865, “Harvey I tell you there is a “heap” of money to be made buying Government Stock. If I had no business here I would go to St. Louis where there is to be a good deal of stock.”

Also included are 9 additional letters written to Harvey during the same period including a single letter from his sister Clarisa Brookins, 2 from Lieutenant Thomas Tollington of the same Company as Harvey, and 4 letters from his other brother Thurman Brookins who maintained the ancestral family farm in Shoreham, Vermont. Thurman laments in his November 6, 1861 letter that George enlisted and worries how Harvey will manage the farm in Minnesota by himself.

Additional letters from George and Harvey are housed at the Gale Family Library at the Minnesota Historical Society.

Some toning, infrequent brown spots. Envelopes are torn, some with stamps removed.