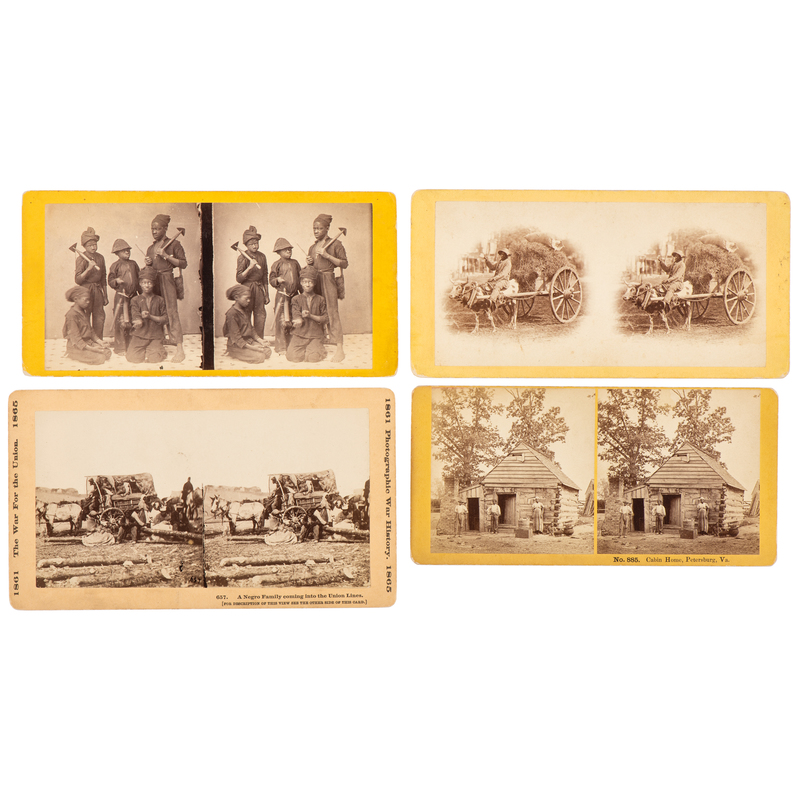 Lot of 4 stereoviews of African Americans, many showing scenes from the Civil War or the Reconstruction era, ca 1860s-1870s. Includes:

The War Photograph & Exhibition Company: Hartford, CT, n.d., after a photograph by David B. Woodbury (1839-1866), ca 1863. A Negro Family coming into the Union Lines. View of covered wagon driven by an African American family, presumably former enslaved people, seeking the protection of Union forces. A soldier in uniform is visible on horseback in the background. Published as part of the "Photographic War History" series and later adapted as a sketch by Alfred Waud (1828-1891) for Harper's Weekly, January 31, 1863.

Jerome N. Wilson (1827-1897): Savannah, GA, n.d., ca 1871. 15th Amendment bringing his Crop to Town. Vignetted view of a man driving a bullock cart filled with hay. Inscribed on verso, "161 / S.B. Bill." Derogatory title refers to the passage of the 15th Amendment to the United States Constitution, which guaranteed suffrage for African American men. Wilson was active in Savannah beginning in 1865 and opened a studio with O. Pierre Havens in 1872.

Stereoviews with varying degrees of staining, spotting, and soiling..