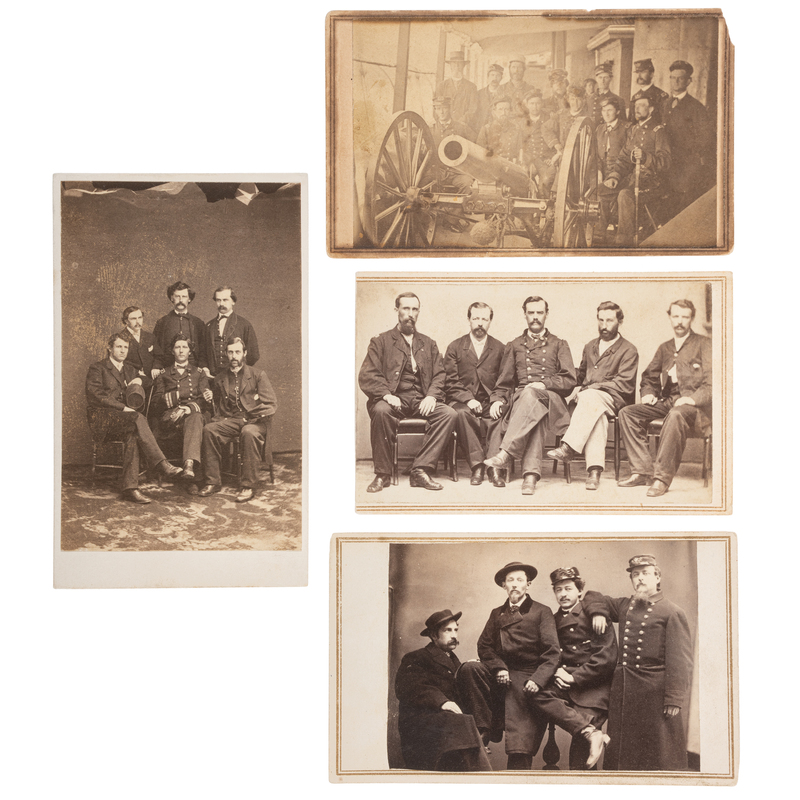 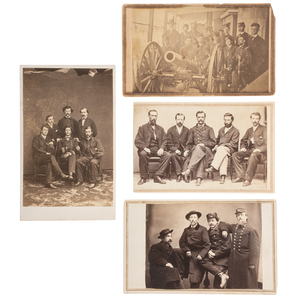 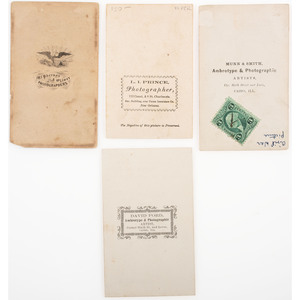 CDV that appears to have been staged aboard a ship, featuring detailed brass deck howitzer used by naval landing parties in foreground. Behind are two rows of officers, one seated and another standing, with another man not part of the group in the backdrop. McPherson & Oliver: New Orleans, LA, n.d. The seated officer far right gripping sword wears a typical double breasted navy frock coat having four narrow stripes on the cuff (but no star), possibly indicating a variant commander rank (1862 Regulations).

CDV of two officers at right flanked by two men in civilian dress at left. Munn & Smith: Cairo, IL, n.d. Green three-cent revenue stamp on verso. The officer at far right sporting a wispy goatee could be a paymaster of some grade based on the details of his undress cap device (laurel over wreath, 1864 Regulations).

CDV of six men photographed at intermediate distance, four in uniform and two not. David Ford: Cairo, IL, n.d. The officer seated center wears two cuff stripes of identical width indicating the rank of lieutenant commander. The canted anchor over wreath device on his cap had technically been replaced by a soaring eagle on anchor emblem. The junior officers on either side of him hold army forage caps, plausibly Mississippi Marine Brigade men.

CDV depicting a row of five seated men, all except the second from left wearing some semblance of uniform. L.I. Prince: New Orleans, LA, n.d. The officer at center wears the classic double breasted frock with no visible cuff insignia and unreadable shoulder straps. Careful examination reveals that this officer rests his left hand (facing camera) on the knee of the fellow next to his left in a gesture of genuine comradeship. The man at far left sports a loose fatigue jacket with shoulder straps of unknown rank.

First carte with significant dark brown toning entirely around perimeter with rounded and damaged corners (piece of upper right missing).  Focus/clarity is soft throughout with left side closest to light nearly washed out.  G.

Fourth carte with good clarity having the left edge of the margin trimmed away, VG.