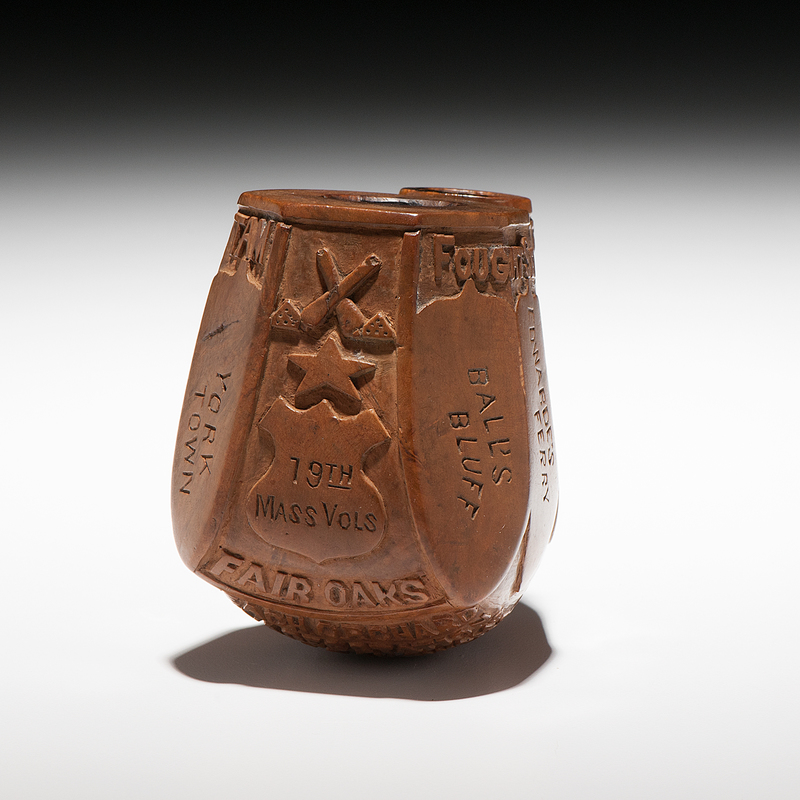 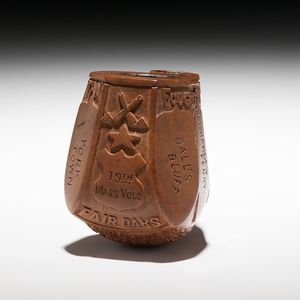 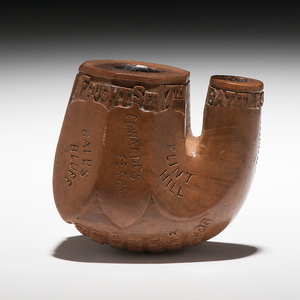 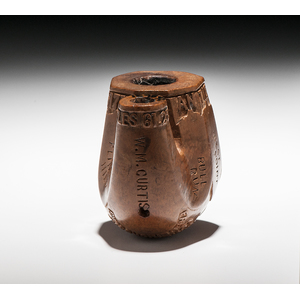 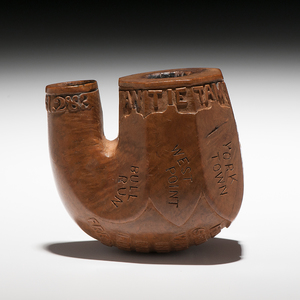 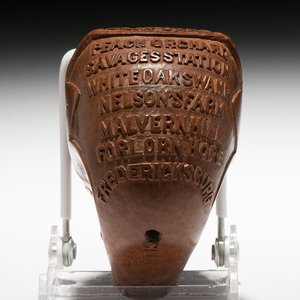 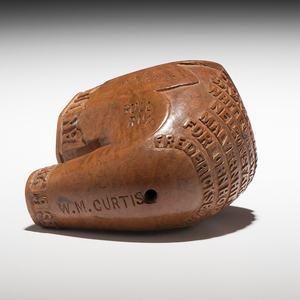 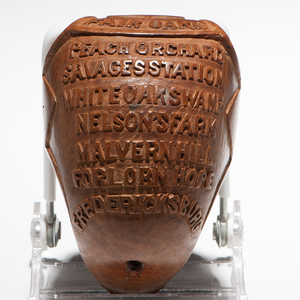 Medium, folk art carved burlwood pipe, light brown in color and nicely grained. Tapered octagon shape bowl with front panel bearing two cross cannon and two triangular stacks of cannonballs / over five point star / over shield (all three motifs in relief). Deeply and neatly carved on the shield 19th Mass Vols. Over large panel on front right, at the point where it curves to the base, the pipe is carved, Fair Oaks. Left side's three octagon panels and matching three on right side carved with commemorative battle Antietam (on right side) and Fought Sep. 17th (on left side). Those same three panels on each side carved with battles on right side, York / Town / West Point / Bull Run, and on left side, Flint Hill / Edwarde’s [sic] Ferry / Ball’s Bluff. Entire underside with a fancy edged wide panel carved in very professional manner in seven large lines of high relief, with seven lines naming seven battles fought by that regiment, commencing at top with Peach Orchard, followed by Savage Station / White Oak Swamp / Nelson's Farm / Malvern Hill / Forlorn Hope, and Fredericksburg. The small extension (into which a stem would be fitted) around its top and relief dates the various battles as Battles 61. 2 & 3. Also carved incised letters with name of owner or man for whom it was made W.M. Curtis. Overall width 3.5 in.; bowl height 3 in., dia. 1.75 in.

William M. Curtis enlisted in the army as a private on April 16, 1861 and mustered into the 4th Massachusetts Infantry, Co. D less than a week later. Serving a brief first term, he mustered out on July 22, 1861 at Boston Harbor only to muster into the 19th Massachusetts Infantry, Co. F, on March 25, 1862. He fought with the 19th through the Siege of Yorktown, the Battle of Fair Oaks, Seven Pines, Malvern Hill, Antietam, Fredericksburg, Chancellorsville, Gettysburg, Battles of the Wilderness, and Spotsylvania. During that time the enemy captured Curtis at Glendale, VA on June 30, 1862, but he returned to service on August 6, 1862. He was wounded at the Battle of Antietam, but reenlisted on December 20, 1863. His valor on the battlefield earned him several promotions up to the rank of captain by October 8, 1864. On June 22, 1864, he was listed as a POW for the second time at Petersburg, VA, and was detained at Macon, GA, Columbia, SC, and Petersburg, VA.

Hole in pipe just to right of "S" in "Curtis." Inventory number painted along rim of shank. Some light surface wear, some scratching, few spots.