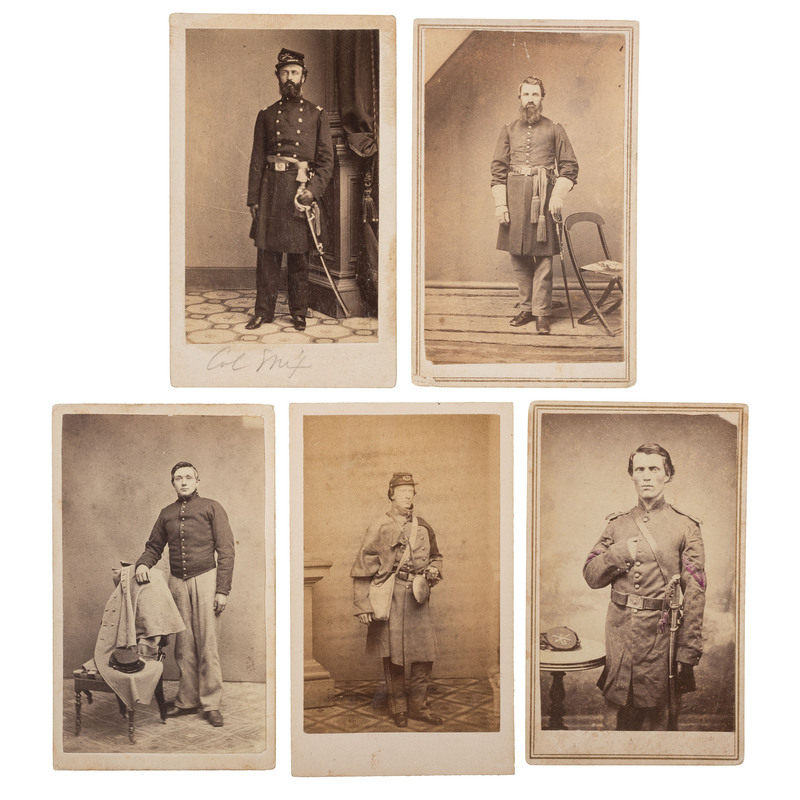 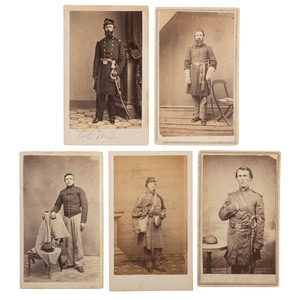 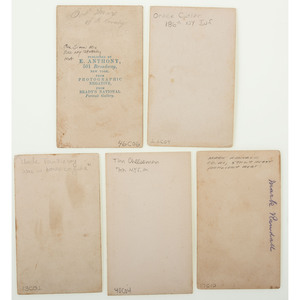 Lot of 5 CDVs of Civil War officers, most identified as officers in New York regiments, comprising:

CDV studio portrait of a standing officer identified as Simon H. Mix. Mix stands holding his sword wearing his uniform and cap. E. Anthony: New York, n.d., ca 1862-1864. 501 Broadway imprint to verso; pencil inscription to verso identifying the subject. Mix enlisted at 36 on August 16, 1861, at Washington DC and was commissioned as a Lieutenant Colonel into Field & Staff of the 3rd NY Cavalry. He was promoted to Colonel on April 26, 1862. While leading a charge at Petersburg, VA he was mortally wounded and taken prisoner on June 15, 1864, dying of his wounds the same day.

CDV studio portrait of a standing officer identified as Orville Cutler of the 186th NY Infantry. He wears his full uniform with a sash and gloves and holds his sword at his side. No imprint, n.d., ca 1864. Pencil inscription to verso identifying the subject. Cutler enlisted at 43 on August 17, 1864, at Champion, NY as a 2nd lieutenant and was commissioned into Co. H of the 186th New York Infantry on Sept. 10, 1864. Wounded at Petersburg on April 2, 1865, he survived the war and mustered out on June 2, 1865.

CDV studio portrait of a standing officer identified as Mark Randall. He stands with one hand inside his jacket, a sword visible at his side, and his kepi with the Company M badge visible rests on a side table. His corporal arm chevrons and tassels of his sword are tinted magenta. No imprint, n.d., ca late 1863-early 1864. Pencil inscription to verso identifying the subject. Randall enlisted when he was 19 at Denmark, NY on Aug. 21, 1862, and mustered into Company D of the NY 6th Battalion of Heavy Artillery on Sept. 12, 1862. He was transferred later that year on Dec. 31, 1862, into Co. M of the NY 5th Heavy Artillery. He was promoted twice, to corporal on Nov. 13, 1863, and later to Quartermaster Sergeant on March 26, 1864. He was mustered out on June 26, 1865, at Harpers Ferry, WV. This portrait was taken during his time as a corporal with Co. M before his promotion.

CDV studio portrait of a standing officer identified as Timothy Cheeseman. He is dressed in his full uniform and kepi, an oilcloth cape, a foraging bag, and canteen. No imprint, n.d., ca 1861. Pencil inscription to verso identifying the subject. Cheeseman enlisted at 35 on April 17, 1861, in New York City. He was commissioned as a surgeon into the Field & Staff of the 7th New York Infantry State Militia on April 26, 1861. He mustered out on June 3, 1861, in New York City.

CDV studio portrait of a man identified only as "Uncle Fautleroy." No imprint. Pencil inscription identifying the subject: "Uncle Fautleroy was in horse brigade." The man stands next to a chair draped with an overcoat and kepi.