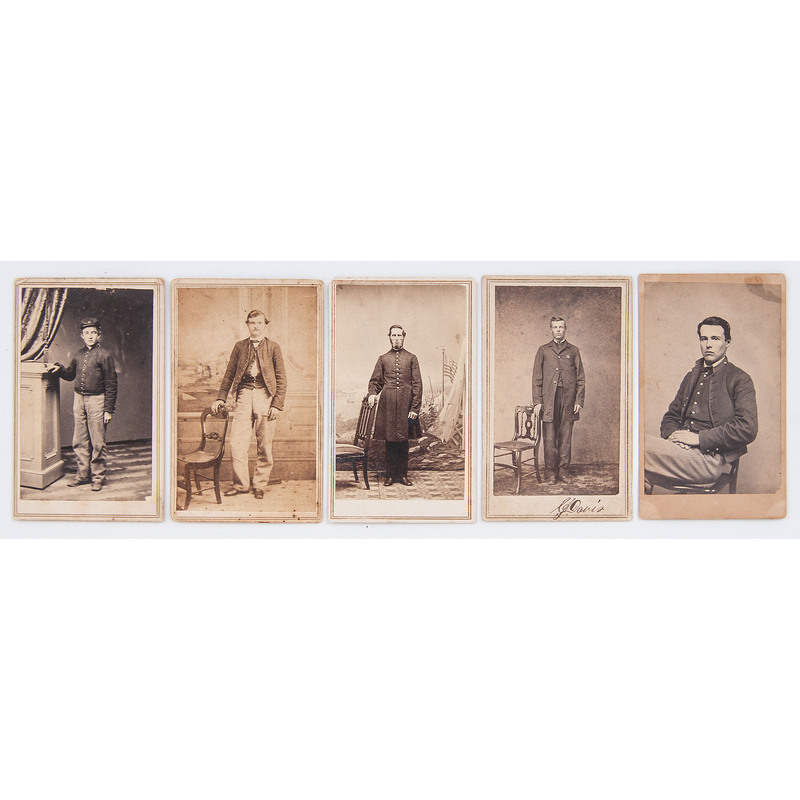 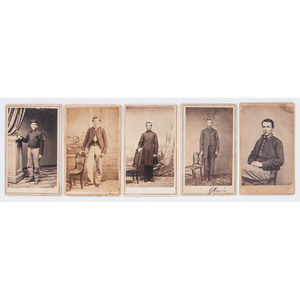 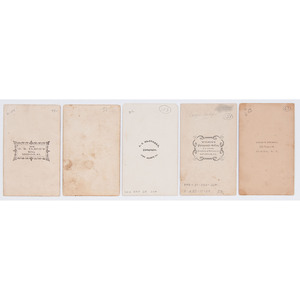 Carte de visite of subject who is likely an artillery or cavalry private wearing an unusual eleven button shell jacket with short square collar devoid of buttons.  Jacket is plain without branch of service trim. Trousers do not appear to be reinforced for mounted service. No back mark.

View of an older infantry private photographed in a regulation nine button frock coat with short collar.  Plain frock lacks branch of service trim.  Image by "A.I. Blauvelt, Port Hudson, LA" features an elaborate studio painted backdrop complete with patrolling paddle wheeler on left, a tented camp behind, and the stars and stripes waving from the flagpole at right.

CDV of young private wearing a non-regulation four button frock coat with lapels turned down revealing the top of a military vest.  Sewn to the breast of the frock is a unidentified, perhaps embroidered, round disc. Inked beneath the portrait is the name "C.J. (or S.) Davis," too common to identify.  The imprint of "Wilson's Photographic Gallery, Savannah, GA." suggests a late war, even post war time frame while the carte lacks the obligatory revenue stamp.

Carte of boy-soldier uniformed in a ten button shell jacket wearing forage cape possibly having brass company letter. The collar has two buttons on either side with the suggestion of colored piping although the cuffs are plain.  The trousers are reinforced for mounted service.  Image by "D.B. Elrod's, Lexington, KY."

Four of the cartes with typical wear cocsistent with age, moderate toning and soft corners, all G+ to VG. CDV by Elrod's with heavier wear to top, else G.