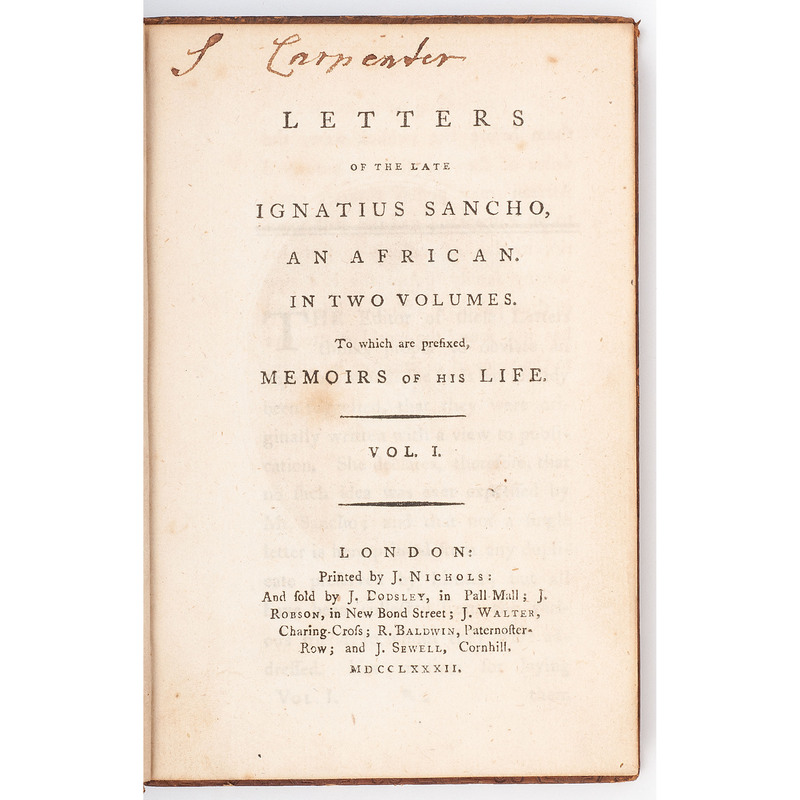 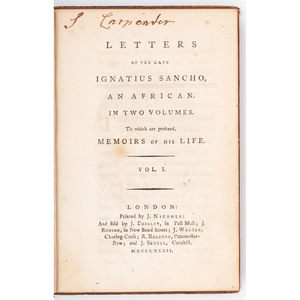 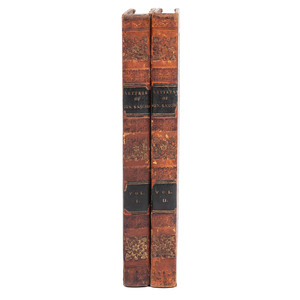 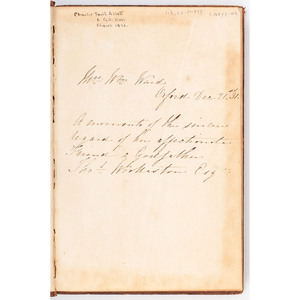 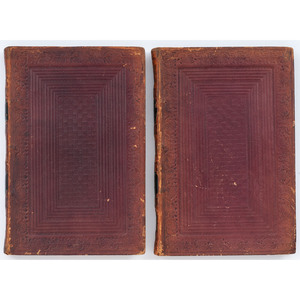 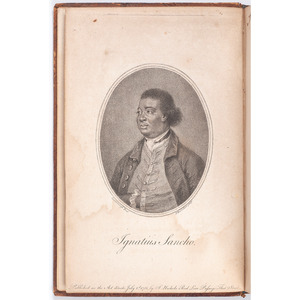 First Edition Letters of the Late Ignatius Sancho, An African, 1782.

FIRST EDITION. Ignatius Sancho was born on a slave ship, en route from Guinea to the Spanish colony of New Granada. He was orphaned shortly after birth and was taken by his enslaver to England and given to three unmarried sisters. He lived with them in Greenwich from around 1731 to 1749 where he had the opportunity to meet John Montagu, 2nd Duke of Montagu (of the first creation, 1690-1749) who encouraged Sancho to read and lent him books from his personal library. Sancho escaped and ran away to the Montagu House in 1749 and was able to find employment with the family as a butler and later a valet. It was here that he cultivated a love of literature, art, theater, music, and more. In 1786, while the artist was painting Lady Montagu, Thomas Gainsborough also painted a portrait of Sancho, which is the basis for the frontispiece engraving in Vol I. The original painting is now housed at the National Gallery of Canada (58).

During the height of the debate regarding slavery, Sancho wrote to author Laurence Sterne encouraging him to lobby for the abolition of the slave trade. Sterne's response on July 27, 1766, was widely published and became part of the canon of 18th-century abolitionist literature. It also elevated Sancho as a man of letters. in 1774, Sancho opened a shop in Westminster where he was able to socialize, share his enjoyment of the arts, and write, frequently submitting letters to newspapers under the pseudonym "Africanus" and publishing musical commentary. He qualified to vote in the parliamentary elections of 1774 and 1780, making him the first person of African origin known to have voted in Britain.

Published and edited two years after his death, this is one of the earliest accounts of African slavery written in English by a former enslaved person. Blockson quotes Vernon Loggins, "his letters...form a work not equaled perhaps in charm and literary merit by another butler, white or black, before Sancho's day or since. The more than one thousand subscribers listed in the volume include many of the nobility and other persons of prominence." The work was extremely popular and at least 5 additional editions were issued by 1802. Blockson concludes: "any edition of his work is indispensable to the study of black literature." Blockson 101, 11; ESTC T100345; Sabin 76310.