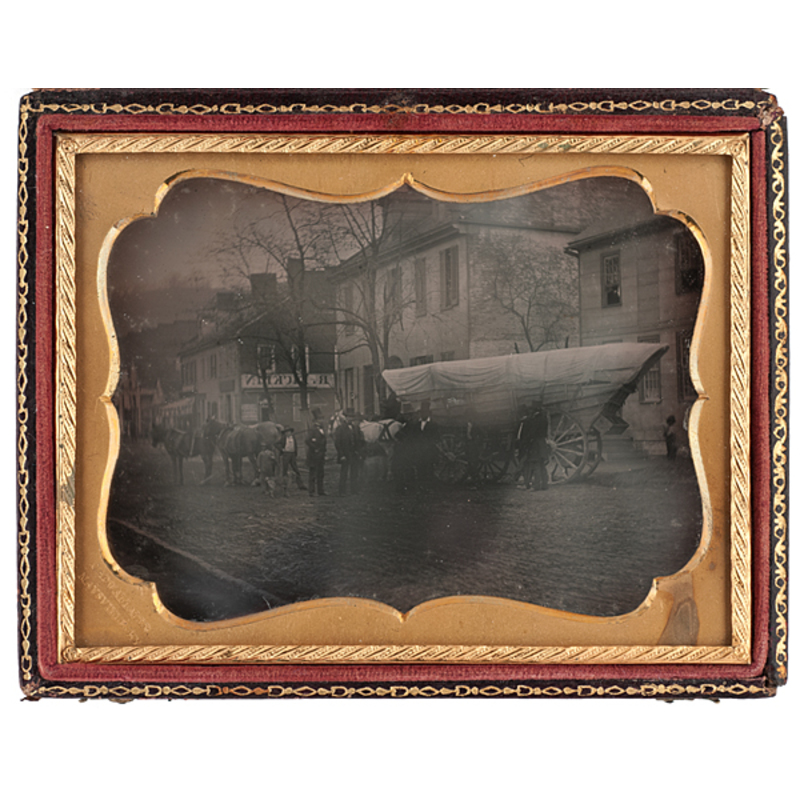 Quarter plate daguerreotype of a Conestoga wagon on a Maysville, Kentucky street, with seven gentleman in top hats, three boys, and a dog posed for the shot. Brass mat stamped Cadwallader, Maysville, KY. Housed in full case. An exceedingly scarce outdoor image from Kentucky and probably the earliest surviving photograph of Maysville.

The Conestoga wagon is often considered the freighter and lifeline to early Kentucky, and from the time that it was introduced in 1717 on, the Conestoga wagon, typically drawn by four horses, represented a vital part of America's history. The wagon's main function from the Revolutionary War through the 1840s was carrying freight across the Appalachian Mountains toward the Ohio River Valley, through the Cumberland Gap into Kentucky by the Wilderness trail and then westward.

In the early 19th century, Maysville was one of two principle ports in Kentucky, and by 1835, it served as a strategically important location primarily as a result of the construction of the Maysville Road, which was a four mile stretch that was built between Maysville and Washington, Kentucky. The road represented a significant advance in construction technology and is considered the first macadamized road in the state. It was passable in virtually any weather condition and greatly reduced freight costs by allowing for heavier loads. Thus, it is no surprise to see the Conestoga wagon, led by at least three horses, parked on the Maysville street.  John Cadwallader (1828-1905), also spelled Cadwaller, may have operated first as an ambrotypist in Cincinnati, Ohio, ca 1857-1858. One source indicates that he moved to Maysville, Kentucky in 1857, where he operated a gallery for three years. He then moved to Marietta, Ohio, where he lived and worked for six years. While in Marietta, from 1860-1861, Cadwalleder was listed with a "gallery of art", taking photographs, ambrotypes and melainotypes. In 1866, he moved to Detroit, Michigan, and opened a gallery with his brother. He then returned to Marietta, where he operated as a photographer until 1887, when he purportedly opened a gallery in Parkersburg, West Virginia.

Condition:Plate in excellent condition.  There is a discernible shadow from lower left slanting to the center of the image.  Resealed in 2006.  Pressed paper case very good.