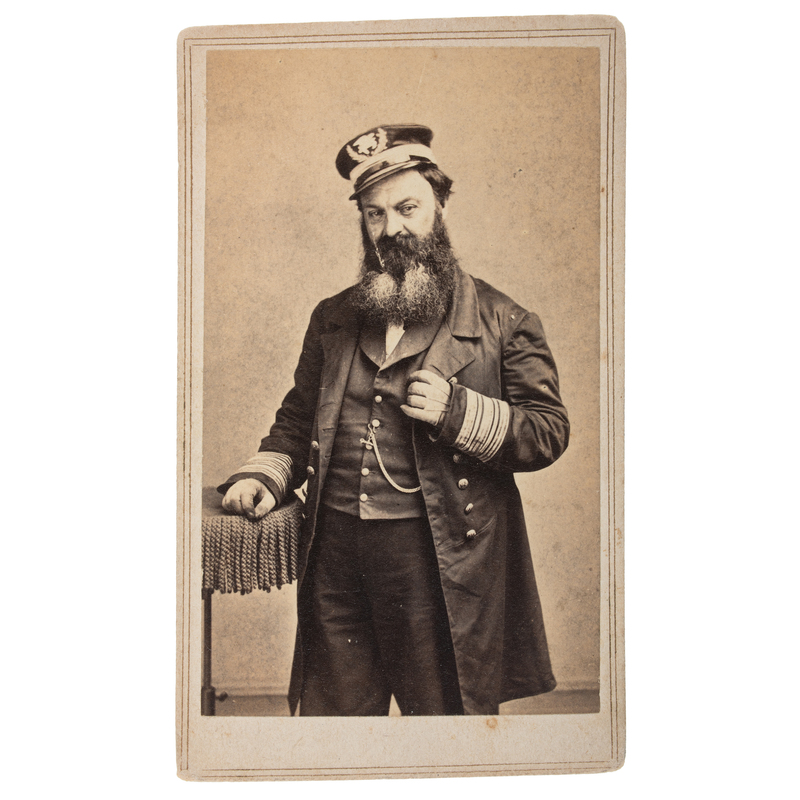 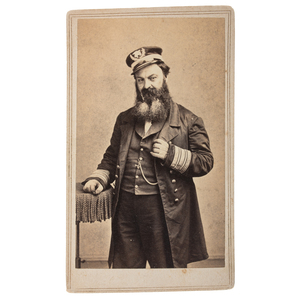 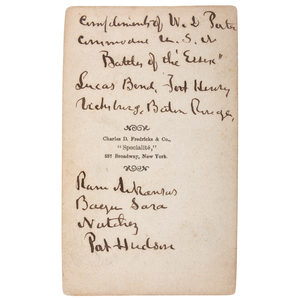 Commodore William D. Porter (1808-1864) was a prominent Brown Water Navy officer during the two years of campaigning it took the Union to gain control of the Mississippi and split the Confederacy in two. Born into an established naval family, Porter first went to sea at age twelve aboard the USS Franklin, a ship of the line commanded by his Uncle John Porter. Porter was appointed a midshipmen in 1823 and made lieutenant in 1834. He spent the next 21 years alternating between shore duty and short cruises taking a particular interest in naval ordnance, specifically the development of an explosive shell, before opting for the "reserve list" of officers in 1855 after three decades of service. Porter returned to active duty as commander in 1855, taking charge of the sloop-of-war St. Mary's on the Pacific coast. With the outbreak of war, Porter was recalled to Washington and tasked with establishing the Western Flotilla for operations on the Mississippi. Porter took command of the gunboat New Era serving under Flag Officer Andrew Foote on the Cumberland River. After repairs in St. Louis, New Era was renamed Essex in honor of the War of 1812 frigate that had been commanded by Porter's father.

For the next six months Commander Porter patrolled the upper Mississippi in Essex frequently in company with other warships commanding a small flotilla. On January 10, 1862 Essex and St. Louis engaged three Confederate gunboats forcing them to withdraw to the protection of nearby shore batteries. A few days later Porter's vessels confronted the same trio of Rebel steamers, this time inflicting damage before they retreated once more to the protection of the shore batteries to avoid capture. The full weight of Captain Foote's gunboat squadron was brought to bear in the attack on Fort Henry on February 6. Essex took heavy fire from Confederate batteries and "received at least 15 direct hits," one projectile from a large 32 lb. gun damaged Essex's boilers severely scalding 28 crewmen. Porter was likewise badly wounded but retained command of his damaged ship leading her out of harm's way. The Essex was repaired at St. Louis and rejoined the Western Flotilla near Vicksburg at the end of the month. Porter received a well deserved if belated promotion to Commodore on July 16, 1862. On July 22, Essex accompanied, by Queen of the West, sortied to engage the Confederate ironclad CSS Arkansas, then under the protective guns of Vicksburg's batteries. Withering Confederate fire concentrated on Essex as she maneuvered to ram the Rebel ironclad striking with "a jarring blow but at an oblique angle" causing Essex to run "aground parallel to her adversary." After several tense moments, Porter managed to extract his ship and pull away, having sustained, surprisingly, only minor damage. Afterwards, Porter remained on patrol on the lower Mississippi between Vicksburg and Baton Rouge, assisting the Army in successfully repelling a Confederate infantry assault on the later August 5. The next morning Essex put on steam for Vicksburg where her old nemesis Arkansas had been reported. Porter found Arkansas "on a bend in the river, close to shore." Essex commenced her attack utilizing incendiary shells which Porter himself had perfected. It is recorded that after about "20 minutes of shelling," Arkansas burst into flames and blew up, although it likely that the Rebels had hastened the end by torching their own ship to prevent capture. Belatedly, in June 1864 the crew of the Essex was awarded $25,000 in prize money by Congress in acknowledgement of the harrowing feat of arms. With Porter in command Essex engaged in the bombardment of Natchez, Mississippi and traded gunfire with Confederate shore batteries at Port Hudson during the month of September 1862. Those engagements proved to be Porter's last on the Mississippi as he had been ordered to New Orleans to receive new orders. Porter, whose health had been declining, reported to New York and engaged in various duties at the Navy Yard there until hospitalized in April 1864. Commodore William D. Porter died on May 1, 1864 of heart disease at St. Luke's Hospital.  His remains were later moved to Woodlands Cemetery, Philadelphia where he rests beside his illustrious but tempestuous father Commodore David Porter.

Carte with good clarity showing minor mottling with one noticeable vertical scratch through Porter's beard in the original negative. Mount with light wear and soiling front and back with soft corners. Overall near VG. Superb never before encountered salutation inked Porter's bold hand.