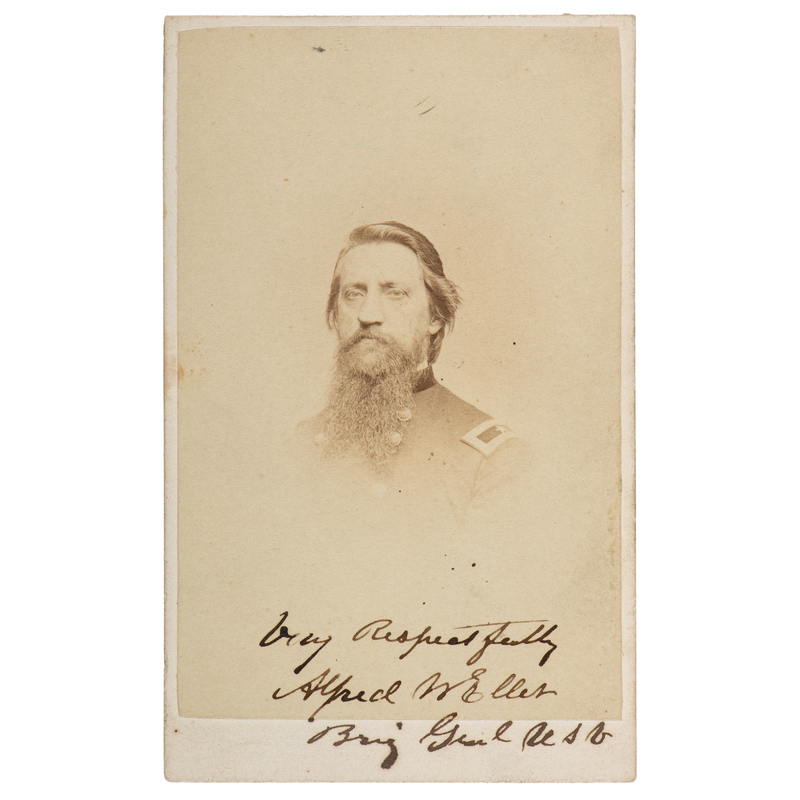 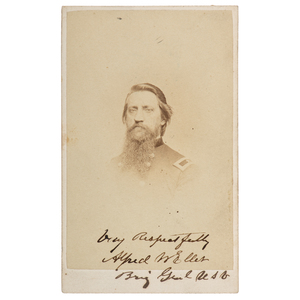 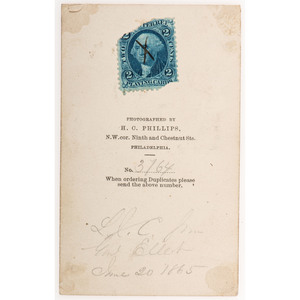 By 1861, Captain Alfred Washington Ellet (1820-1895), a Pennsylvania native, was in command of Co. I, 59th Illinois Infantry.  After participating at the Battle of Pea Ridge, he joined his brother Charles in Cincinnati, where he enterprisingly purchased and converted civilian vessels into warships for service on the Mississippi during the spring of 1862. On April 28, 1862, Alfred Ellet was commissioned as lieutenant colonel, A.A.D.C. reflecting the vague command structure of the joint Army-Navy Mississippi River Squadron. On June 6, 1862, the Union Squadron comprised of five Navy ironclads and four of Charles Ellet's rams (commanded by Navy officers!) engaged a similarly constituted force of eight makeshift Confederate cottonclads at the Battle of Memphis. The entire Confederate force, called the River Defense Fleet, was either sunk or disabled (and captured) within view of the city while Colonel Charles Ellet became the only Union casualty of the battle, wounded by a pistol shot in the knee and dying on June 21. Alfred Ellet had assumed command after his brother was wounded and later received formal endorsement from the Secretary of War together with a promotion to brigadier general on November 1, 1862. In the intervening time Lieutenant Colonel Ellet steamed up the Yazoo with a small flotilla of three rams and discovered the the presence of the the Confederate ironclad ram CSS Arkansas. Upon promotion to brigadier, Ellet took it upon himself to raise a body of ship borne infantry to supplement the largely naval crews of his ram vessels and for further work as a quick reaction force for raiding and reconnaissance along the reaches of the Mississippi and its tributaries. This force - evolutionary along with its tactics - later became known as the Mississippi Marine Brigade (MMB) drawn largely from existing (Illinois) infantry regiments, never numbering more than 800 men with detachments of artillery and cavalry. On April 16, 1863, David Dixon Porter's fleet including Ellet's rams succeeded in running the Confederate water batteries at Vicksburg with many of the ships damaged but only a single transport lost during the downriver passage.  Afterwards, Ellet was occupied by transporting Grant's army as the siege ring around Vicksburg methodically took hold and tightened. Ellet and the Marine Brigade burned Austin, Mississippi on May 24 in retaliation for the near loss of a transport and five days later joined the fleet above Vicksburg on May 29.  During June the MMB constructed a casemate battery opposite Vicksburg and commenced shelling the city on the 23rd. It is recorded that the battery, reinforced and strengthened, did effective work causing considerable damage "especially by stopping work at the foundry and machine shop."  Another contingent of Marines accompanied a river borne expedition to Greenville, Mississippi on June 25 and Goodrich's Landing on June 30, losing one officer killed.

Jurisdiction over the MMB had always been a source of army-navy contention complicated, it is said, by General Ellet's abrasive and overbearing personality.  In a ruling dated June 11, 1863, The Army's Judge Advocate General seemed to make the brigade a "special contingent of the army and not the navy," but General Grant temporized, stating on July 23 that "they are not subject to my orders." Clarification sought by Ellet up the chain of preferred command did not occur until October 1863 when the Army Secretary of War "assumed full jurisdiction over the brigade." The Navy rejected Stanton's interference and supposed authority in the matter, undoubtedly antagonized by Ellet himself. As the tempo of operations along the Mississippi lessened after Vicksburg, General Ellet found less employment for his MMB and attempted to recast it as a something akin to a hybrid infantry regiment. Then it became the turn of the Marines to voice objection. In the face of ongoing, unresolved administrative problems, complaints and protests by the men primarily having to do with their undefined terms of service as "US Volunteers", as well as shipboard living conditions and water quality, the Secretary of War ultimately scuttled the MMB completely, ordering it disbanded in August 1864.  At this point a number of long serving officers were relieved or discharged angering General Ellet, while the Marines were removed from their vessels and assigned to shore duty at Vicksburg. Here, General Ellet had attempted to recast them as something akin to a hybrid infantry regiment with the title of 1st Regiment Mississippi Marine Brigade. The effort was for naught and General Ellet resigned in frustration on December 31, 1864. Before the end of January 1865 the last of the erstwhile Marines had been discharged.

General Ellet returned to civilian life and ultimately returned to work as a civil engineer before settling in El Dorado, Kansas where he became involved with railroad development. Alfred Washington Ellet died at age 73 on January 9, 1895 and was buried in the Belle Vista Cemetery, El Dorado, Kansas.  His second wife, Abigail Robarts Ellet, survived him and lived until 1928.  As was the custom among men of prominence, Ellet kept a ready supply of wartime cartes-de-visite, as this one with the general in uniform was not given over to the unknown "L.J.C." until June 1865, six months after his resignation.