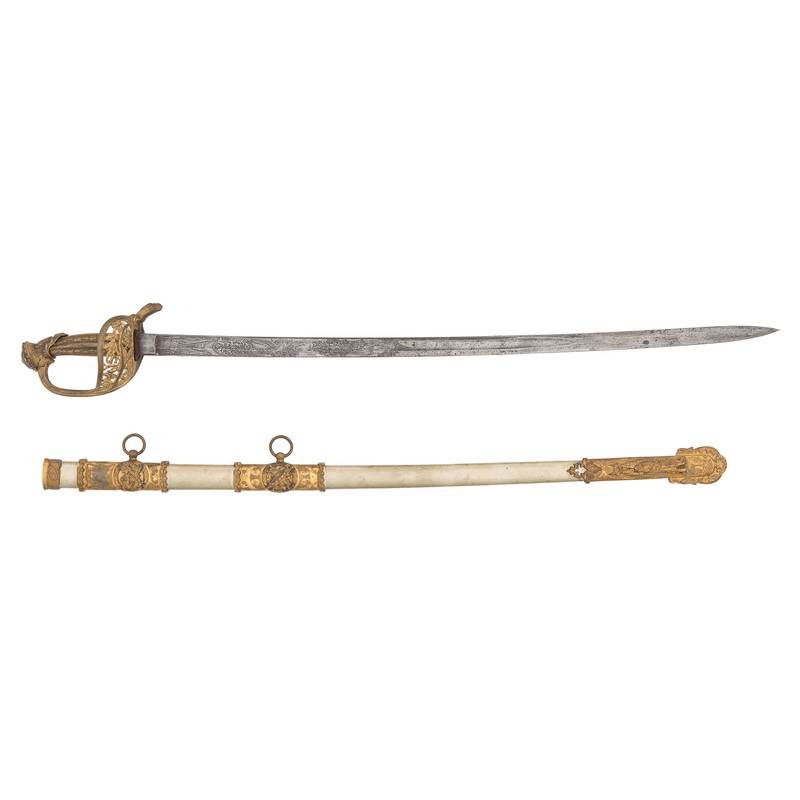 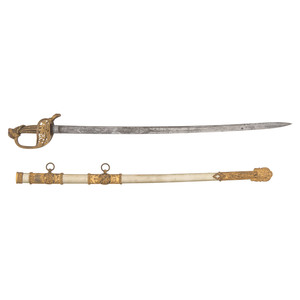 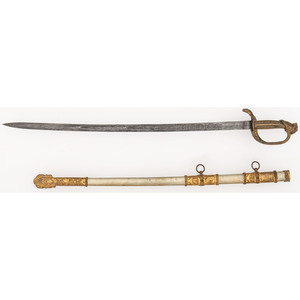 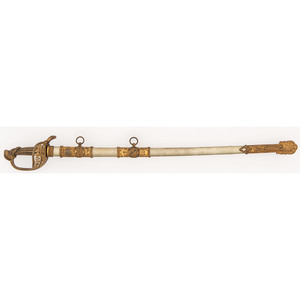 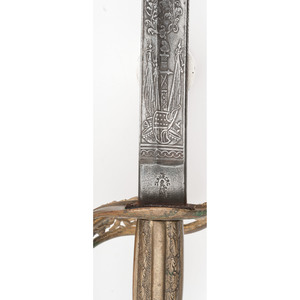 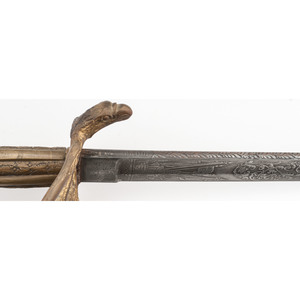 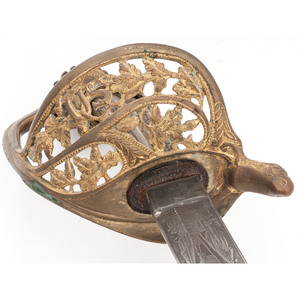 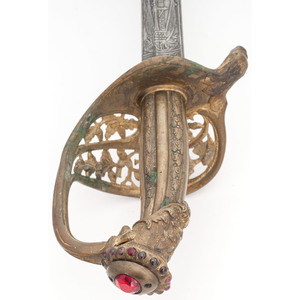 32" blade length with etched panels of military motifs. Pommel shape of Phrygian helmet decorated with floral sprays and red garnets with a large garnet in the pommel. Guard is of a half-basket design with two branches with floral designs and US and an eagle on the end of the guard. The handle of cast brass in a ribbed with fluted and floral designs.  Marked on the back of the blade Iron Proof; also marked near the ricasso is Clauberg with {knight} proof.  Metal scabbard has been plated with highly decorated bands in a raised military designs. The drag is gilt with a soldier standing and crossed flags behind him; middle band gilt finish with raised military motif and US on the reverse; top band gilt finish with raised designs.

A native of Newark, New Jersey, Charles H. Tay (1836-1871) mustered into service as Captain of Company K., 2nd New Jersey Volunteers on May 30, 1861 after short service in the 7th Regiment NYNG. Part of the New Jersey Brigade commanded by Brigadier General Kearny, the 2nd commenced active operations in March 1862 skirmishing with the enemy on several occasions as the tempo of the fighting increased, culminating with the Seven Days' Battles before Richmond. The 2nd NJ was heavily engaged at Gaines' Mill (Golding's Farm) on June 27, 1862 suffering at least 40 killed and wounded with many missing while compelled to temporarily bury the regimental colors to prevent capture. The regiment then saw action at Charles City Cross Roads (June 30) and Malvern Hill (July 1) where Captain Tay served as the regiments acting major. Later that whirlwind summer at Second Bull Run (August 31) the 2nd New Jersey sustained concentrated Rebel artillery fire losing twenty men killed and wounded before being forced to retreat as enemy cavalry attempted to cut them off. Captain Tay is listed as "present" during the Maryland Campaign, being discharged after Antietam to accept the lieutenant colonelcy of the 10th New Jersey on September 22, 1862.

Tay was commissioned on September 29, 1862 and joined the 10th New Jersey then part of the garrison serving in the defenses of Washington. In April 1863 the regiment was detached with a division and sent to Suffolk, Virginia where Longstreet's Corps lay siege to the city. The 10th New Jersey became engaged at Carrsville on May 19 trading a few casualties for a number of Rebel prisoners. Afterwards, the 10th returned to Washington before being quickly ordered to Philadelphia during the Gettysburg emergency remaining there until September 1863. The regiment was then assigned to provost duty at Pottsville, Pa. followed by routine guard duty on the Potomac. For the next six months the regiment then languished in the backwater of Pennsylvania stationed in the coal fields at Mauch Chunk which negatively affected morale. With Grant having taken command of the Army of the Potomac, preparations commenced for a massive spring offensive intended to close with and wear down Lee's army in a purposeful strategy of attrition. Infantry reinforcements drawn from all quarters bolstered Grant's strength including the 10th New Jersey recalled and assigned in April 1864 to a division in the 6th Corps. The next year of Tay's life would prove to be tumultuous as the 10th New Jersey surged forward into the abyss of the Overland Campaign. First blood was drawn May 6 in the Wilderness during the assault on General Gordon's entrenched positions. Here, the regiment "lost nearly one entire company in prisoners alone" along with killed and wounded. Two days later at Spotsylvania the 10th New Jersey and a regiment on its left became isolated and "pounced upon by the enemy with great force, compelling the Federals to give way with heavy loss - the 10th having 80 men and several officers captured including Lieutenant Colonel Tay." The prisoners were herded to the rear and the next day started for Richmond, but were fortunately on the same day finally rescued by General Sheridan's cavalry" after briefly escaping and being recaptured. Initial casualty figures were much reduced as stragglers came in, still discounting the lightly wounded, no fewer than 30 men were ultimately killed or severely wounded during the first week of attritional fighting. The tempo of the Overland Campaign did not abate. The regiment was back in the thick of the action at Cold Harbor losing another 34 killed and severely wounded pressing several attacks over the next four days in June. A lull in the fighting then occurred as the vicious fighting turned into a stalemate that pocked the landscape with ever lengthening lines of trenches. Towards midsummer the 6th Corps was taken out of line and sent to Washington to defend against Jubal Early's desperate drive on the Capitol. While "in the field" during late July the enlisted men of Company E, 10th New Jersey saw fit to present this sword to Lieut. Colonel Tay. The circumstances of the presentation could not be readily located but might have been recorded in a contemporary newspaper account.

In August 1864 the 6th Corps became part of the Army of Shenandoah and pursued Jubal Early's Corps to Snicker's Gap before joining in Sheridan's Valley Campaign. The regiment fought a sharp two-day skirmish at Strasburg on August 14-16. On August 17th detached as rear guard the New Jersey Brigade and elements of Wilson's Cavalry defended Winchester against a Louisiana Brigade under Confederate General Zebulon York, a native of Maine. The Federal force was badly handled but held, losing upwards of 250 men captured by the 14th Louisiana. Lieut. Col. Tay was reported missing and later confirmed to be a prisoner. During a lengthy transit to Danville Prison via Lynchburg, Tay's health gradually took a turn for the worse. He kept a diary and wrote of his time at Danville as "dark and dreary...with little prospect of exchange." On January 31, 1865 Tay recorded his despair, "To day I am 29 years of age. This is indeed the most gloomy birth day I have ever experienced. Sick and in prison, far away from home...no prospect of release in a suffering condition for want of proper food and clothing, no means of getting away or even communicating with those from home." Tay had relocated to Libby Prison when he was finally exchanged and paroled at Annapolis on February 22, 1865 writing, "Washington's Birthday and the day of my deliverance... Happiest day of my life. The experience of the last six months, the most inhumane treatment I have rec'd makes me very, very anxious to get my regiment again and at their head seek revenge for the mutilation that many of the men have been subjected to...God surely will not allow them to go unpunished." Lieut. Colonel Tay was briefly admitted to the Officer's Hospital at Annapolis and denied the opportunity for revenge, was discharged from the army on March 7, 1865 by special order. One last entry of note possibly concerns the disposition of this sword. Later in February Tay wrote that he had "received his trunk with all of his equipment that was left in camp at Winchester."

Charles Tay returned to his wife in Newark, New Jersey and later received a well deserved brevet to colonel on July 16, 1867 (retroactive to March 13, 1865) for "gallant and meritorious service during the war." He was employed as a bookkeeper for several years but physical adversity no doubt exasperated by his captivity contributed to a premature death while traveling in Minnesota on August 22, 1871, aged 35. He was originally interred in Newark's Mount Pleasant Cemetery and later removed to Woodlands Cemetery in Philadelphia. His wife Julia filed for a widow's pension on July 29, 1872 (Certificate #161724).

Finally, we note that a marvelously complete archive of Charles Tay material comprising numerous CDV photographs, a uniformed charcoal portrait, together with three detailed diaries (covering 1863 and 1864-5 as a prisoner) were offered in another auction in November 2018. Accompanying Tay's sword are National Archives Military Records from both 2nd NJ and 10th NJ service.

The blade has very strong etched panels and a gunmetal gray blending with patina. Some light black staining. The guard and handle are excellent with a nice untouched look. Scabbard has no dents and retains most of the gilt and nickel finish. Overall an excellent example of a presentation Civil War sword.