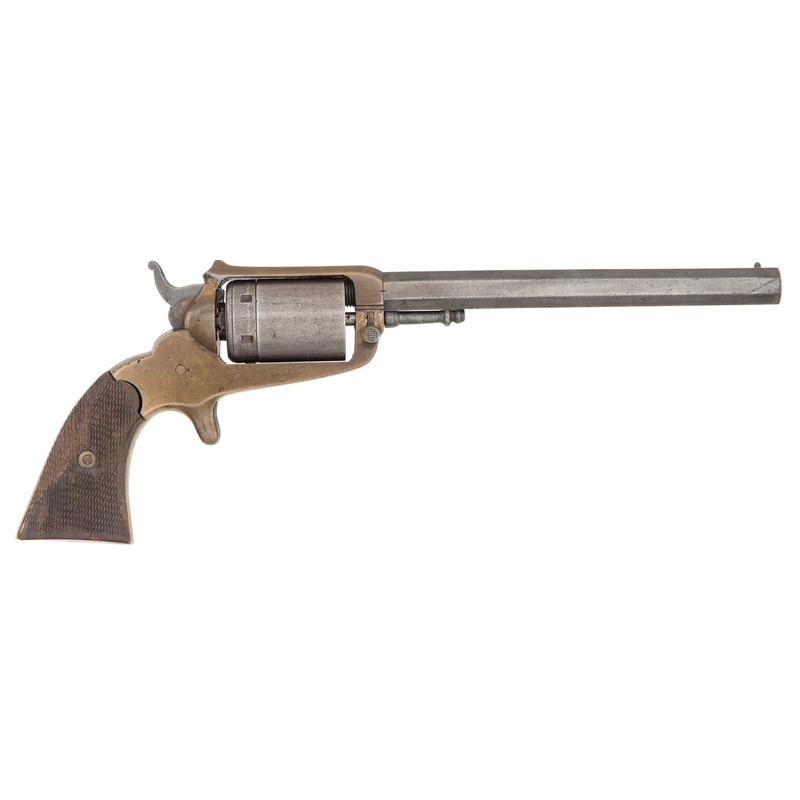 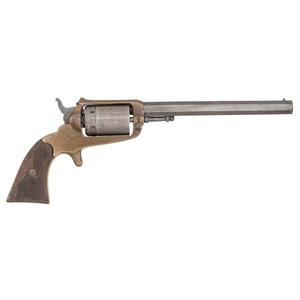 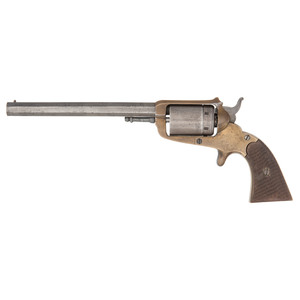 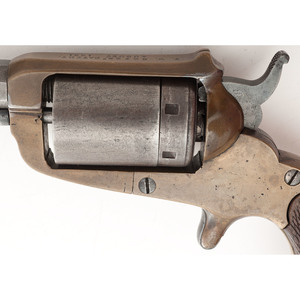 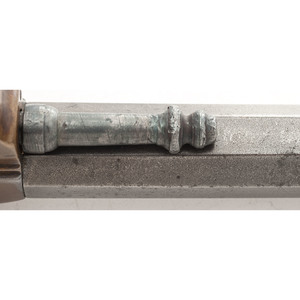 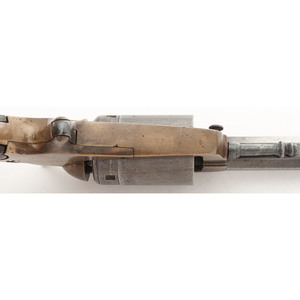 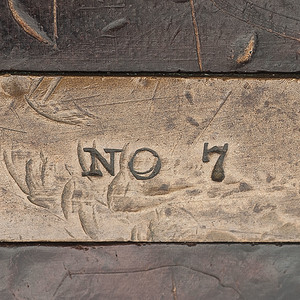 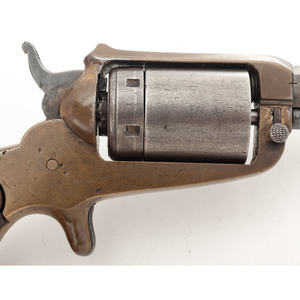 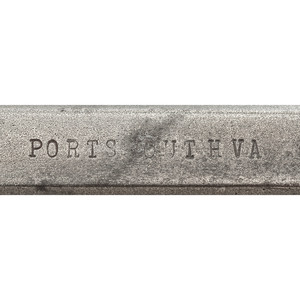 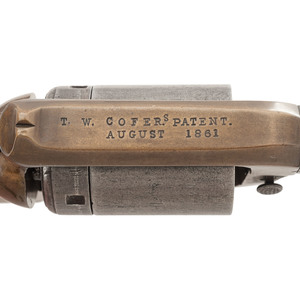 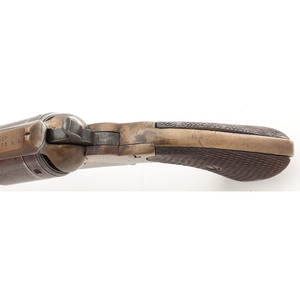 .36 caliber, 7.4375" octagonal barrel, S/N 7. Brass frame, blued barrel, case hardened hammer, checkered two-piece walnut grips. Single action, spur trigger, 6-shot percussion revolver with unique two-piece cylinder that uses Cofer's patented percussion ignition brass cartridges. Top strap marked in two lines: T.W. COFER'S PATENT / AUGUST 1861. Barrel marked in a single line: PORTSMOUTH VA. Bottom of butt marked No 7. No other markings present externally or internally. Sand cast brass frame with removable side plate on reverse, secured by two screws, allowing access to the action. Frame shows some minute casting flaws on the exterior and rougher workmanship and tool marks on the interior and on the bottom of the top strap. Iron barrel screwed into the solid brass frame with about 3.5 threads exposed inside the frame shows some minute apparent flaws under strong light and magnification. Fixed notch rear sight cast integrally with the frame, brass cone front sight about .25" from the muzzle. Seven-groove bore with extremely slow rate of twist, appearing nearly straight. Checkered round, spring-loaded push button release on front right side of frame allows withdrawal of the cylinder arbor pin to remove the cylinder for loading and unloading. Cylinder shows some minute streaky flaws and measures 2" in overall length, not including the .135" ratchet on the rear, with the removable section measuring .5". The main body of the cylinder is nominally 1.43" in diameter with the the slightly rebated removable rear section measuring nominally 1.42" in diameter. Cylinder chamber mouths vary slightly but nominally measure .393". Barrel measures nominally .368" at the breech and muzzle. Includes 6 brass empty Cofer percussion cartridges with percussion cone bases, two with conical lead bullets press fit into the brass cases. These appear to be museum quality replicas produced from original Cofer cartridges in the same collection. The empty cases measure nominally 1.53" in overall length, including the percussion cone, are nominally .393" in diameter, with a nominal internal diameter of between about .35" and .36" at the case mouths, as most are not completely round due to dents and dings. To date only two examples of the Type I, "split cylinder" or "patent cylinder" Cofer revolvers are known.

This exact revolver is pictured on page 145 of William Albaugh's Confederate Handguns with the photograph noted as courtesy of the National Rifle Association. When the revolver was discovered it had previously experienced a catastrophic failure that resulted in the forward portion of the topstrap and the top portion of the frame where the barrel screws in being blown away. No barrel was present in the photo. The frame showed a diagonal break through the topstrap that extended from just to the right of the letter "U" in "August" and traversed the letter "R" in "Cofer." The only original stamping present in the photograph was "T.W. COFE" with a partial "R" on the top line and "AUGU" on the bottom line. The photo does include the balance of the frame and mechanism, the cylinder, cylinder arbor pin and catch, grips and a single Cofer cartridge. The revolver was also pictured in this original, damaged condition in M. Clifford Young's groundbreaking research presentation to the American Society of Arms Collectors entitled "The Legacy of a Tidewater Gunsmith - Thomas W. Cofer." The revolver was subsequently restored with exquisite quality and workmanship, replacing the missing barrel with a nearly perfect copy that is appropriately marked, and having the forward portion of the topstrap and frame repaired. The restored gun is pictured on page 146 of William Gary's Confederate Handguns, along with 1st Model Cofer Revolver #1, which no doubt provided the model from which to copy the missing parts, correctly recreate the contour of the frame and correctly mark the gun.

Thomas W. Cofer (1828-1885) was a Portsmouth, VA based gunsmith working for his cousin P.D. Gwaltney prior to the outbreak of the American Civil War. Sometime ca 1860 or early 1861 Cofer appears to have started working on his own, under his own name as a very small number of arms, primarily shotguns are known with his name and his Portsmouth, VA address. Cofer later moved across the Elizabeth River and worked in Norfolk, so post-war Cofer arms are Norfolk marked. Cofer was one of the first recipients of a Confederate States patent, and one of the very few to receive one related to weapons or small arms. On August 12, 1861 he received CS Patent #9 for a unique percussion ignition cartridge revolver with a two-piece cylinder. The patent primarily covered the two-piece cylinder design described above and the cartridges which the revolver would utilize. To students of firearms history the design appears to be either a brilliant evasion of the Rollin White or a clear violation of it. However, in either case, as a Confederate patent in a different "country" the point is moot. Total production of the Cofer Type I "Patent Cylinder" revolvers is not known, but to date only two examples, are known to exist, #1 and #7. Cofer went on to produce two other types of revolvers that were not directly related to his patent. The Type II was also a bored-through cylinder revolver using a percussion cap ignited cartridge, but this revolver used a one-piece rather than two-piece cylinder. This variant was of a smaller caliber and only one example exists, making the Type II variant an anomaly. The final version, or Type III revolver was a conventional percussion revolver with attached loading lever. All three used the same basic construction of a brass frame, octagonal iron barrel and spur trigger, and a single action mechanism with the overall appearance being that of a Whitney Navy revolver.

For many years the Cofer revolvers were regarded as a secondary Confederate revolver, with no known Confederate military purchases. Eventually researchers did discover a "contract" or at least receipts and payments records for a total of 82 revolvers that were ordered in January of 1862 by Captain Edgar Burroughs of the 5th Virginia Cavalry. These purchases have been attributed to the 5th Virginia Cavalry ever since, but after reading the original receipts and looking into Capt. Burroughs service history this cataloger has discovered that the attribution may not be completely correct. Edgar Burroughs, a 38-year old minister and farmer, was commissioned into Company A of the 5th Virginia Cavalry as a Captain on April 20, 1861. However, he was mustered out of that regiment on March 27, 1862. That same day he took command of Company B of the 14th Battalion of Virginia Cavalry, which was known alternately as "Burrough's Cavalry" or the "Chesapeake Battalion." On October 27, 1862 Burroughs was promoted to major and was transferred from the Chesapeake Battalion to the field and staff of the newly formed 15th Virginia Cavalry, which was created by consolidating the 14th and 15th Battalions of Virginia Cavalry. The first Cofer receipt selling revolvers to the Confederacy is dated January 18, 1862 and is for 17 revolvers at $40 each. It is accompanied by a note signed by Capt. Edgar Burroughs of the "Chesapeake Cavalry," which states the Burroughs had received from Cofer "seventeen revolvers, being part of eighty-two which he is to furnish my company." The payment by Capt. Smith Stansberry CSA Artillery, detached to the Ordnance Department, is dated February 5th, 1862. An accompanying note in the Cofer portion of the Confederate Citizen Files from the Confederate Ordnance Department memorializes the authorization for Burroughs to purchase revolvers in the Norfolk area for $40 each, because as the Ordnance Officer writing the note states; "this was $10 less than we were paying." A second receipt for 65 Cofer revolvers is dated May 31, 1862, some two months after Burroughs left the 5th VA Cavalry for his new command in the 14th Battalion of VA Cavalry. This payment receipt is also signed by Capt. Smith Stansberry. What is not clear is whether these additional revolvers were then delivered to Capt. Burroughs' old company in the 5th VA, his new command, or were simply issued as needed from the Confederate Ordnance Department. The best documented Type III Cofer percussion revolver with Civil War provenance (ex-Cliff Young Collection) has its capture history written on the Confederate holster that accompanies it. This gun was captured by a Capt. Merrill of the 11th Maine Volunteer Infantry from a "Rebel Signal Officer" on 21 July, 1864. This suggests that the final batch of 65 Cofer revolvers delivered may have been issued generally in the Confederate army, rather than going to the 5th Virginia Cavalry. It is only conjecture, but is certainly possible that the January 1862 delivery of 17 guns was of the "cartridge" Type I revolvers, while those delivered some 4 months later were of the percussion Type III revolvers. As to date only 2 Type I cartridge guns are known and some 13 Type III percussion guns survive, it seems quite likely that this was the case. That would suggest a survival rate of about 12% of the Type I cartridge guns from the delivery of 17 revolvers and 20% of the 65 gun from the second, likely Type III delivery. These statistically similar survival ratios suggests that the bored through cylinder guns are almost certainly 5th VA revolvers from the January 18 delivery, while the percussion revolvers from the May 31 delivery may have seen more general issue in Confederate service. In either case, Cofer revolvers remain among the scarcest and most desirable of all Southern manufactured revolvers, and this is essentially a once in lifetime opportunity to acquire a Type I Patent Cylinder Cofer revolver, as only one other known example survives today.

Very good as restored. Retains no finish on the replacement barrel with a lightly oxidized pewter gray patina showing some scattered age discoloration and evenly distributed pin pricking. Barrel marking remains mostly clear and legible with only the letter "M" in "Portsmouth" mostly obscured. Bore extremely dirty, moderately oxidized and evenly pitted. Hammer with traces of case coloring, most visible with the side plate removed. Brass frame and side plate with a wonderful, untouched deep mustard patina with hints of ocher. Side plate shows no remarkable prying or tool marks along the sharp edges. Both the original and restored markings on the repaired topstrap remain very crisp and clear, as does serial number on bottom of grip. The repair itself is all but undetectable. Revolver remains mechanically functional and times, indexes and locks up as it should. Grips remain in about good condition with wear and age and some old repairs. A small piece of reinforcement wood has been inlet into the interior of the left grip around the screw escutcheon and a triangular piece of wood has been repaired on the right grip along the backstrap measuring about 1.5" along the base at the backstrap with the two legs measuring roughly 1" in length and meeting at the grip screw escutcheon. Otherwise the grips show the bumps, dings and handling marks expected on a Civil War period revolver's grips. A wonderful restored example of one of the rarest of all revolvers of the Southern Confederacy.