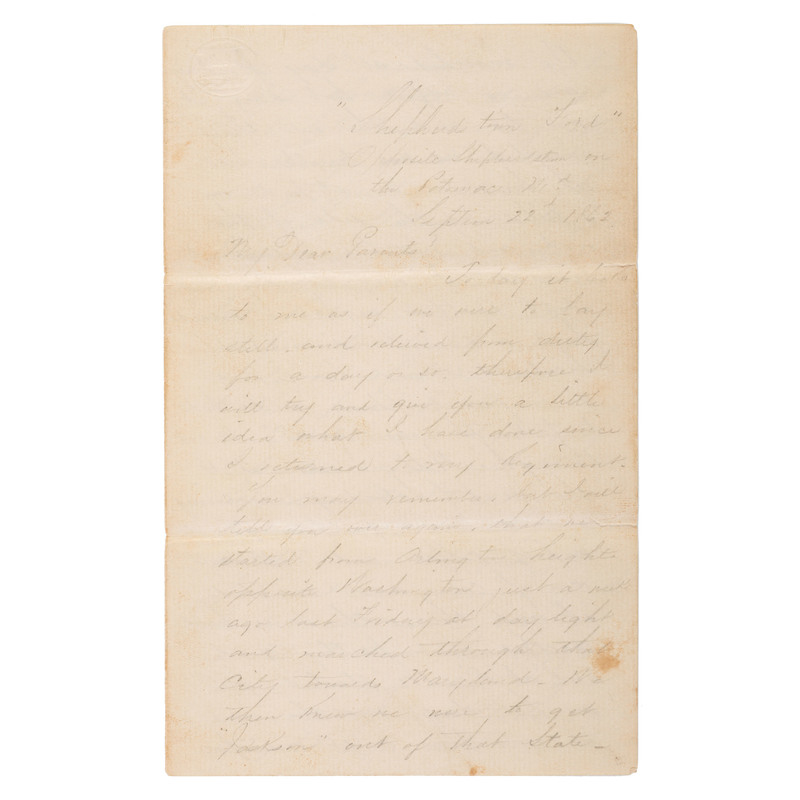 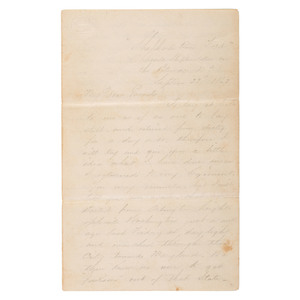 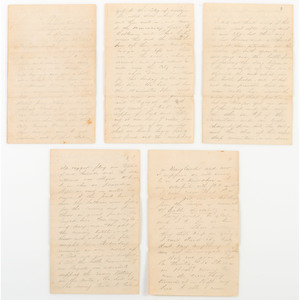 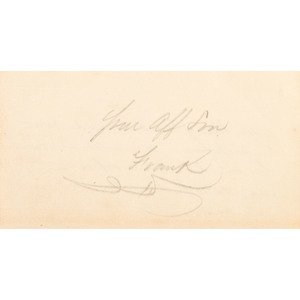 When he wrote this letter, Kelly had one year of service with the hard-fought 44th New York Infantry under his belt. He had enlisted in Albany, NY on September 25, 1861 as a sergeant and participated in the Siege of Yorktown and key battles including Hanover Court House, Gaines' Mill, Malvern Hill, and the Second Battle of Bull Run. In early September, the 44th New York's involvement in the Maryland Campaign drove the regiment across the state, and Kelly provides his parents with charming descriptions of Rockville, Hyattstown, Frederick City, and other towns along the way. At South Mountain, he encounters a battlefield, and his tone shifts markedly: “We soon saw first a dead horse and then another and then a tree torn to pieces by shell and a fence torn down, pretty soon a dead Rebel lying down in the gutter and then another, and pretty soon a horse a rider and then a dozen laid out on rails all Rebels and when we got to the top of mountain I gave up counting them and got through the cut as quick as possible and the sight was awful.”

After more marching, Kelly arrives at Keysville, where his regiment joins “the whole Army” and readies itself for the battle that would take place at Antietam: “We laid here Tuesday night and every man thought of the coming battle and knew not what his fate might be. Wednesday morning we were called up 3 o’clock and get our breakfast 6 o’clock the battle commenced and our Brigade was ordered to support the main battery in the center.” After describing his successful defense of the battery from the Confederate onslaught, Kelly elaborates on the dynamic struggle between North and South for the advantage: "The enemy tried to take it but they could not do it. The battle shifted on the right against Hooker. Here the battle was terrible until afternoon when it shifted to the left against Burnside and we came very near getting beat there, but two charges saved us and we held our ground and beat them. We drove them on the right and why! Because General McC[lellan] had the right and Burnside the left. We went to the Extreme right and left both as supports and at night slept in the field."

Having suffered terrible losses, both sides held their positions on Thursday without attempting to advance and by the next morning, September 19, Lee had begun to withdraw from the battlefield and return across the Potomac to Virginia. Kelley describes the battle's horrific aftermath to his parents, writing in part, "Friday morn we advanced and went through Sharpsburg over the battlefield and right was awful indeed, our loss was heavy and rebels [sic] was terrible. The people said the rebs carried off 500 wagons of dead to the other side of the Potomac, so as to blind us. We kept on until we came to the Potomac and out batteries shelled them as they crossed and their loss was heavy."

At the end of 1862, Kelley was promoted to the rank of second lieutenant. He also served as Acting Aide-de-Campe to General George Meade in the Gettysburg Campaign and was brevetted captain of US Volunteers for his bravery and upstanding conduct during the war.

Creasing as expected, with some minor areas of brown spotting. Writing on first page is somewhat faint but still legible.