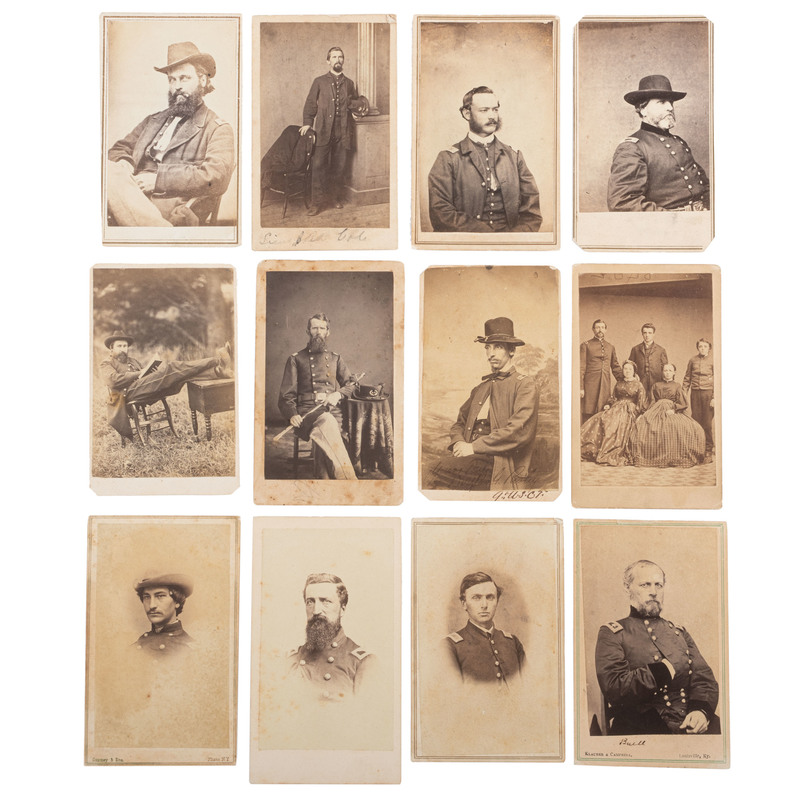 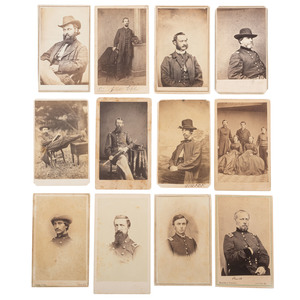 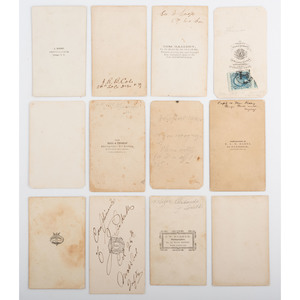 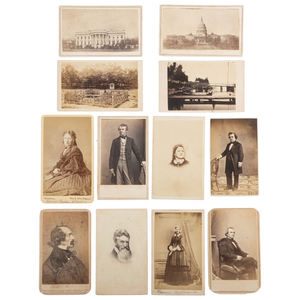 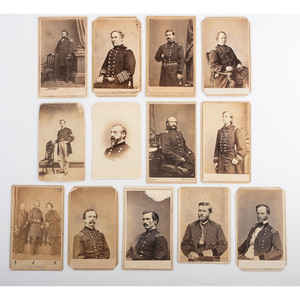 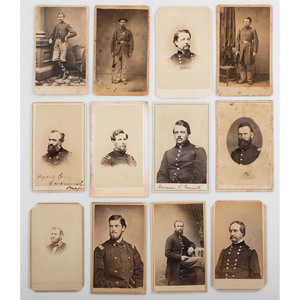 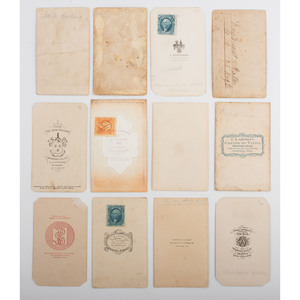 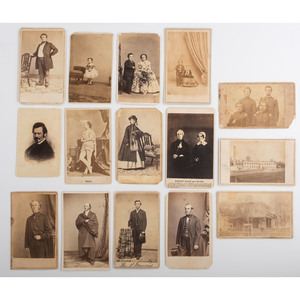 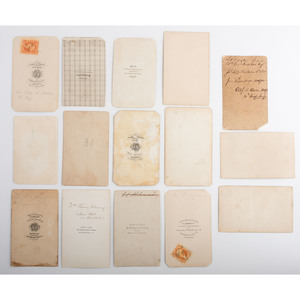 The album also features a number of identified officers and enlisted men: Brvt. Brigadier General Josiah Pickett, 25th MA Infantry, autographed on verso as colonel, with J.W. Black, Boston backmark. Pickett enlisted as a 1st lieutenant, and served with Co. A, 3rd MA Rifles, and Co. A, 25th MA Infantry, raising in the ranks between 1861 and 1864 to brevet brigadier general. Severely WIA Cold Harbor, VA, 6/3/64; Major Orlando J. Smith, shown as captain, by J.W. Husher, Terre Haute, IN. Smith served with Co. K, 16th IN Infantry, Co. B, 71st IN Infantry, and 6th IN Cavalry, raising in the ranks between 1861 and 1863 from sergeant to major. POW Athens, GA, 8/3/64; Uncredited group portrait of four 80th IN Infantry officers, identified on verso, including possibly Colonel Lewis Brooks, Lt. Colonel James L. Culbertson, Adj. Alfred D. Owen, and a major whose name is difficult to discern; Major Cornelius S. Underwood, signed below image with rank, by A.A. Turner, New Orleans, LA. He was commissioned into the US Volunteers Paymaster's Department on 5/64; possibly Norman T. Gassette, although subject is an officer and HDS only lists Gassette as a private with Co. A, 19th IL Infantry; George Snope, 5th IN Cavalry; Captain Douglas G. Risley, signed below image. Risley served with Co. C, 9th IN Infantry and Co. E, 9th USCT. WIA Fort Gilmer, VA, 9/29/64; family portrait with inked note on verso, "Capt & Mrs. Kelly," with imprint of Dabbs, Alleghany City, PA; and five officers identified as "Capt. McLead", "Sergt Barker", Lt. Arthur, Co. C, 121st Regiment, possibly Francis T. Arthur from Ohio, 2nd Lt. J.R.B. Cole, Co. D, 20th ?, and G.W. Titcomb. Accompanied by at least 13 cartes of unidentified soldiers, the highlight being an outdoor view of a bearded officer reclining in a chair, holding a book in his hands, and resting his feet on a small desk in the middle of a field; and a studio view of a stern looking officer seated with sword in hand, identified as "J.H. McClymonds, Jr." and credited to Ball & Thomas of Cincinnati.

Outdoor scenes showing the White House and Capitol building are also included (no studio imprint), as well as a richly-toned view of two people seated in a canoe with a US flag flying at one end and what looks to be a "Union" banner at the other, an image of three women paying respects at a cemetery by J. Carbutt, Chicago, IL, a pair of images of a factory, and two views of large homes.

Range in condition from good to near excellent. Several CDVs trimmed along edges. Some with minor creases. Light to moderate toning and foxing.