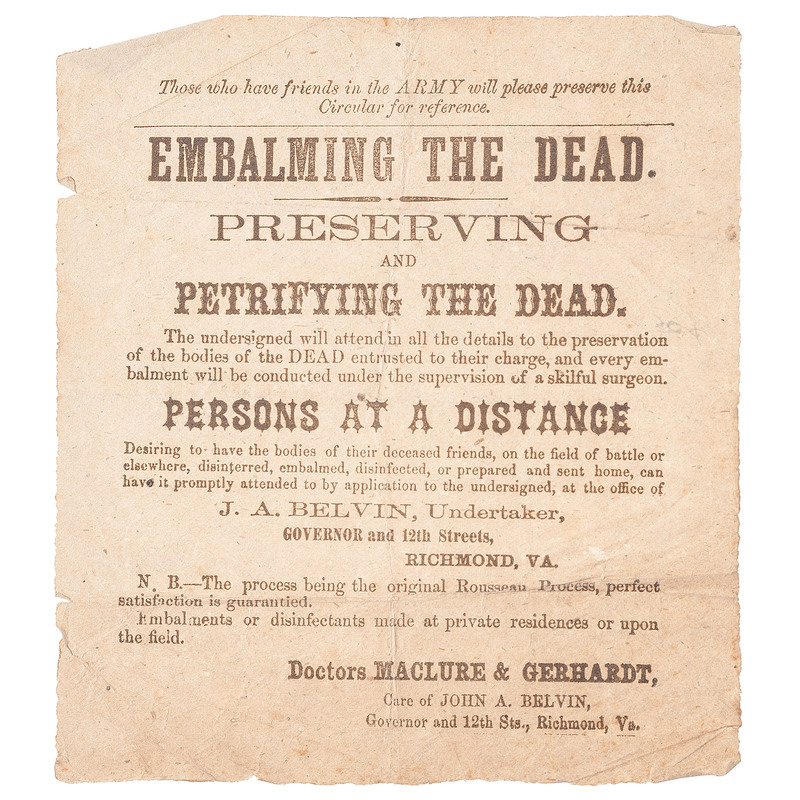 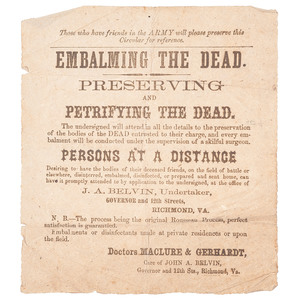 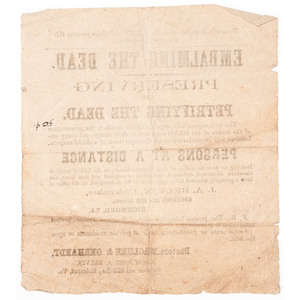 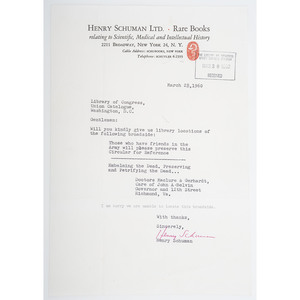 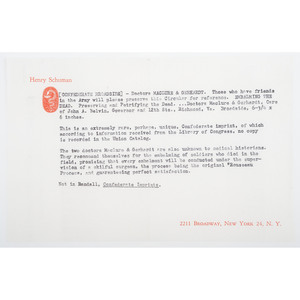 Printed broadside, approx. 6 x 6.75 in., advertising the embalming services of Virginia Doctors Maclure and Gerhardt. N.d. Bold text near top of broadside reads, "Embalming the Dead. / Preserving / and / Petrifying the Dead." Text continues, promising that "The undersigned will attend in all the details to the preservation of the bodies of the DEAD entrusted to their charge, and every embalment will be conducted under the supervision of a skillful surgeon." Maclure and Gerhardt also make an appeal to those far away, claiming, "Persons at a Distance / Desiring to have the bodies of their deceased friends, on the field of battle or elsewhere, disinterred, embalmed, disinfected, or prepared and sent home, can have it promptly attended to by application to the undersigned, at the office of / J. A. Belvin, Undertaker, / Governor and 12th Streets, / Richmond, VA." It is further noted that "Rousseau Process" will be utilized to guarantee "perfect satisfaction," and that the procedures will take place at "private residences or upon the field." Broadside undersigned in print, "Doctors Maclure & Gerhardt."

Further research on the "Rousseau Process" yielded few results, though there was a reference to an "M. Rousseau" found in the Southern Literary Messenger Devoted to Every Department of Literature and The Fine Arts, Vol. 16, printed in 1850 by Macfarlane & Fergusson. An article in that publication titled, "From our Paris Correspondent," discusses M. Gannal and his new processes for embalming dead bodies and preserving plants. The article continues, "Another process, called after the name of Rousseau, its inventor, is now attracting considerable attention. It consists in the introduction, during the clarifying operations, of a current of carbonic acid gas, which produces, if accounts are to be relied upon, a magical effect."

A truly rare advertisement, which, according to a letter included in this lot, was not able to be located in the Library of Congress Union Catalog Division.

Broadside with brittleness at edges, including a few small rips and tears, and a number of creases throughout. There is very minor spotting in a few places, not affecting text, and text retains clarity and boldness throughout.