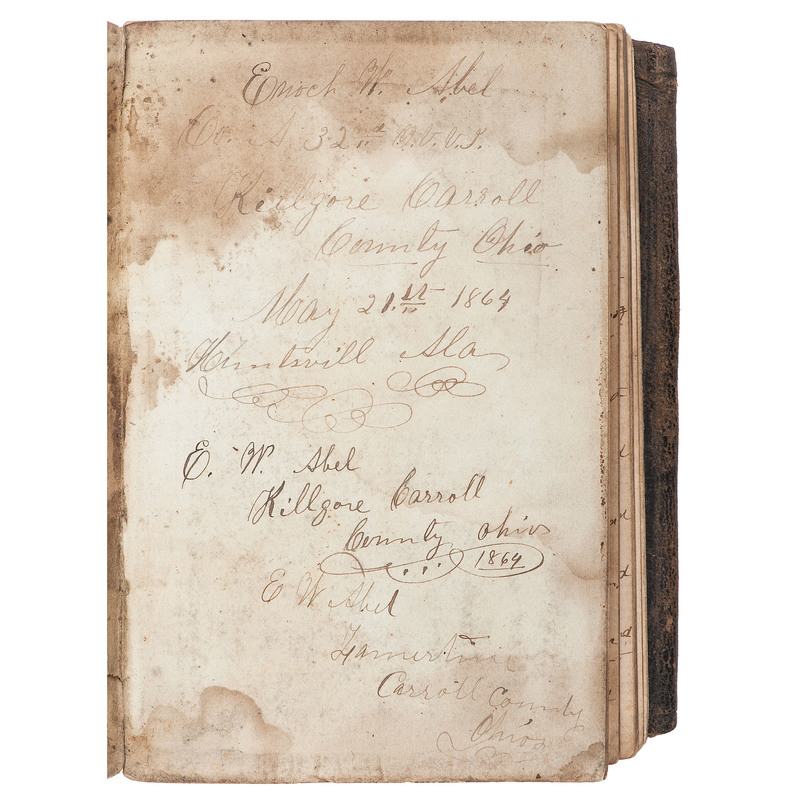 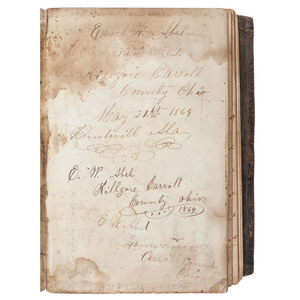 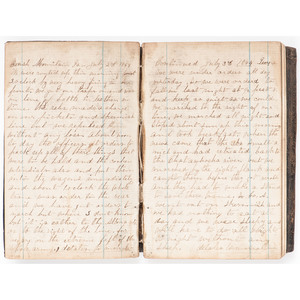 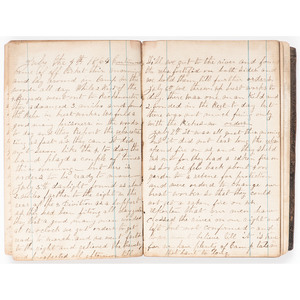 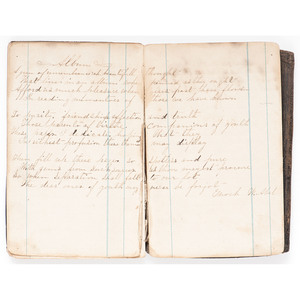 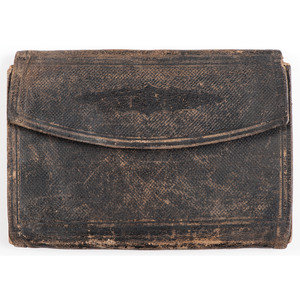 Enoch Wright Abel was born in Harrison Co., Ohio in 1838. He lost his father at the age of 12, but was determined to get a good education, working to pay for his schooling. He then learned the carpentry trade, and "practiced in a western state," returning to Harrison Co. in 1860.

When the war broke out, Abel enlisted in Co. A, 3rd OVI (a three-month unit), with which he fought at Bull Run (first). He re-enlisted on August 12 in Co. A., 32nd OVI. He was taken prisoner at Harpers Ferry on September 15, 1862, was exchanged and rejoined his regiment. During his service he fought at Vicksburg, Atlanta, Champion Hills, Jackson (MS), Port Republic, Winchester, Resaca, and more. He mustered out in 1865 after over four years of service.

He moved to Perry Township, Carroll County, Ohio after the war, married in 1870 and continued working at his trade. He had no children of his own, but raised an adopted daughter. He later served as Justice of the Peace, among other offices in the township. He died in 1927, a widower, in Cuyahoga County, Cleveland, OH.

This diary represents but a short part of his time of service, but an important part. The Atlanta Campaign took place over early May to the beginning of September, 1864. The first page details his journey from home back to the unit in Huntsville, Alabama. This was about the time three-quarters of the unit veteranized, at which time they would have gotten a furlough.

In many ways this diary tells the story of the campaign, though not very exciting reading at times: "May 29: moved at 6 am. Camped at 3 pm. marched 17 miles and skirmished for 8 miles. 3 men wounded. May 30. broke camp 6 am. moved ahead of 4th divition[sic] crosed [sic] Warington mountain. Camped at Warington after a march of 17 miles. May 31. broke camp 6 am. moved on the rear of the 4 di. crosed Sand Mt. day very warm and dusty camped 7pm after a march of 20 miles. June 1st, 1864. orders to move at 6 am. Special orders red [sic] to the regment [sic] in regard to pilfering. we halted at 12 ... as the day was so hot that the artilery [sic] horses could not stand to travil [sic] the whole corps massed here for and hour,...report that Forest [sic] is moving on the flank of the Army The 4. di. orderd to move on fast to a pass in the Mtn wich they reached at midnight after a very hard march of 22 miles camped at a creek cald Sand Creek, " and so on.

By the 8th of June they were approaching the front lines. "...we went into camp at 6 in the evening within six miles of the rebs lines, herd [sic] the report of artilery [sic] for the first time since I left home, the report is that we will take our place on the line tomorrow." They then get into a pattern of moving a short distance - forward or back - and throwing up new breastworks. It also started raining nearly every day, filling the rifle pits with water and knee-deep mud.

Other times he gives fairly detailed accounts. "July 4... It did not seem like the 4. to day the band playd a couple of times this evening, but here is orders to be ready to move. July 5th daylight found us about 2 miles farther to the right in the rear of the 4. Divition as a support as they had been fiting [fighting] all day yester. They lost a good many men wounded. at 12 oclock we got orders to get ready to march. and we went farther to the right and relieved the Cavalry....we got to the river and found the rebs fortifid on both sides and we hold them till further orders. July 6th we threw up brest works to day. There was one man kild and 2 wounded in the Regt. to day but there was not much firing only with the picket - no orders."

A short time in the field packed with movement and actions.

It appears that some pages have been removed at the back. None seem to be missing from the diary, as there are a couple of blank pages at the end. Pencil lead smears on a few pages. Generally readable and used as expected.