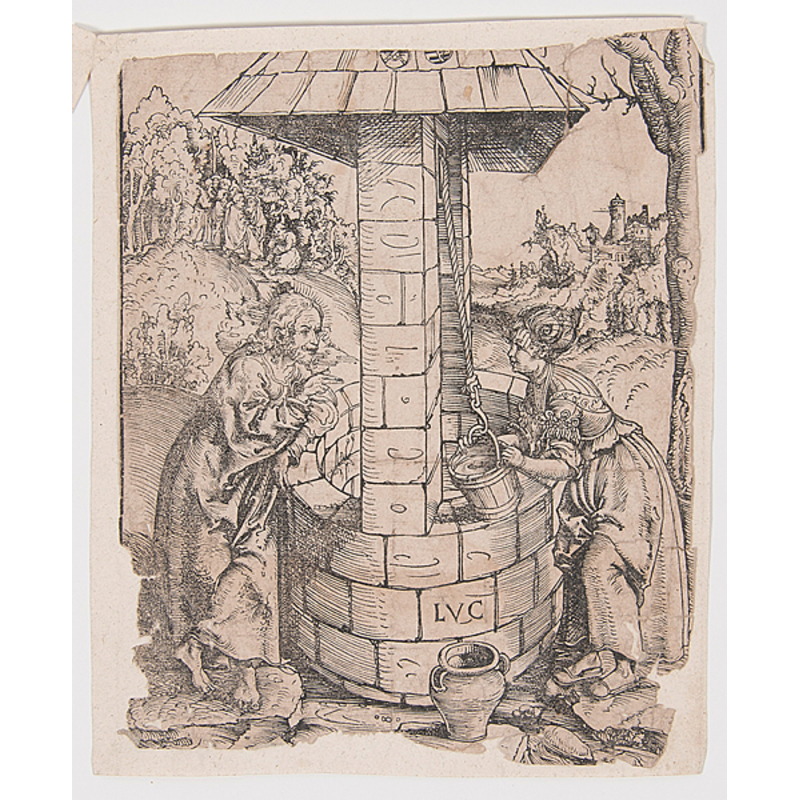 Engravings of the Life of Christ, Plus

Continental, 17th-18th century. A collection of four engravings of the life of Christ, including an engraving of Jesus and the Samaritan woman at the well, marked LVC on well for unknown artist, on laid paper; one engraving depicting Jesus' crucifixion marked Johan ab Ach pinxit a 1596 l.l. and F. Xaveri [illegible] 1772 l.r., on wove paper; one engraving depicting Jesus' crucifixion marked Ioan. Strada. inven. l.c. for Johannes Stradanus (Flemish, 1523-1605), on laid paper; one engraving of Madonna and child with John the Baptist, unknown artist, on laid paper; plus, three engravings depicting religious figures, including one titled B. Bertoldus Francisc. by unknown artist, on laid paper; one engraving depicting the deathbed of a man with Christian symbolism and numbered 39 l.r., unknown artist; and one engraving depicting a nun surrounded by churchgoers, unknown artist, on laid paper; largest plate 8.5 x 10 in. (Madonna and child).
From The Old Master Print Collection of Johann Petz (Germany, 1818-1880), Descended in the Family of the Artist
Petz was born at Lermoos, Tyrol, in 1818 and showed an early interest in wood carving and drawing. Petz worked as a shepherd for his family as a boy, but fled as a young man to a distant relative in Wildermiemingen  to pursue the study of sculpture and drawing, which he did for three and a half years. In 1837, he decided to further his studies in Munich, and by chance he came into contact with the sculptor Konrad Eberhard (German, 1768-1859). Eberhard recognized Petz’s talent and took the young man on as a pupil, and several years later, secured for him a commission for the memorial statue for the famous German scholar Heinrich Klee (1800-1840). Petz’s design outlined a Gothic niche surmounted by a pinnacles and finials, which would house a sandstone sculpture of the Good Shepherd. This marked the beginning of the young artist’s career and established his reputation in Munich.
Petz was influenced by Nazarene and Neo-Gothic movements in Bavaria, otherwise known as the Pre-Raphaelite movement in England. Petz would also go on to receive commissions for churches, altars, and tombstones in England and the United States, and was highly sought after as a sculptor and church designer. Several locations for which he designed churches and their decorations are Cham, Arnschwang, Seeon, Vilsbiburg, Isen, and Riedering. Most notably, he contributed the design for a sculpture of the Last Supper for the Frauenkirche in Munich in 1859, which was regrettably lost in air raids during World War II.  During his career Petz also worked with Joseph Otto Entres (Germany, 1804-1870) and Joseph Knabl (Germany, 1819-1881).

Jesus at the well: Adhered to backing, creasing and wrinkling to paper, small pieces missing in both lower corners, small tear to u.r., and toning.

Johan ab Ach: Fading, especially to right side, toning, stain to u.l. corner, small stains near l.r.
Stradanus: Dark discoloration, adhered to backing, small holes near l.c., crease in u.l., and small hole l.r.
Madonna: Tear u.c., adhered to backing, heavy toning, creasing and wrinkling to paper, small dots of ink allover.
B. Bertoldus: Small series of holes on left side, small piece missing to right side, wrinkling of paper, and toning.
Deathbed: Toning, small hole outside plate on right side and l.l.
Nun in Church: Toning, creasing to paper.
For condition inquiries please contact cleveland@cowans.com.
Please note that a condition report is only an opinion, given as a courtesy, and should not be treated as a statement of fact. Cowan's Auctions shall have no responsibility for any error or omission.
Estimate: $100 - $200
Price Realized Including Buyer's Premium
$30
09/17/2016