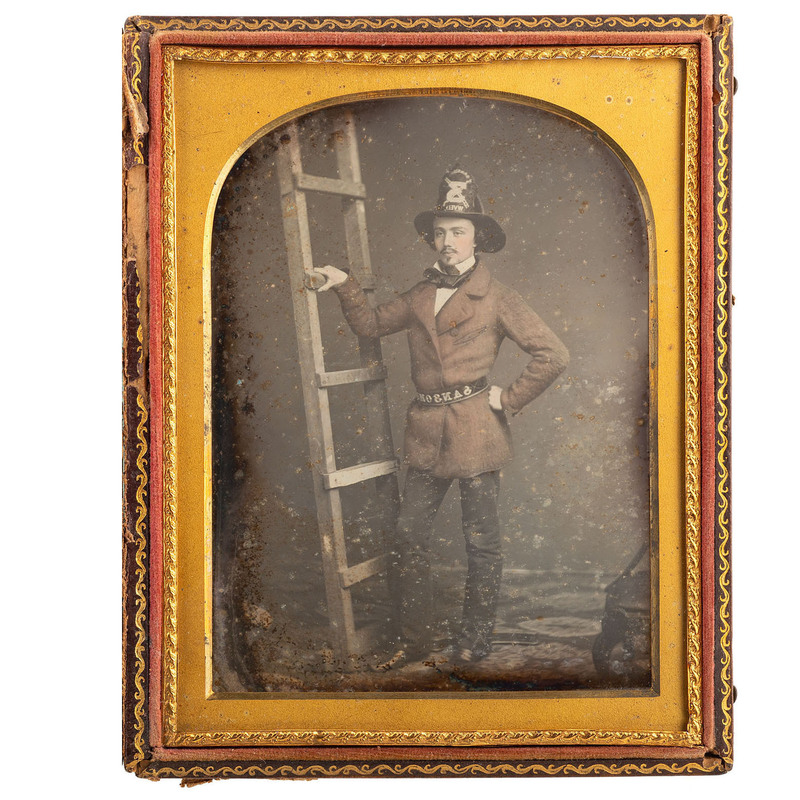 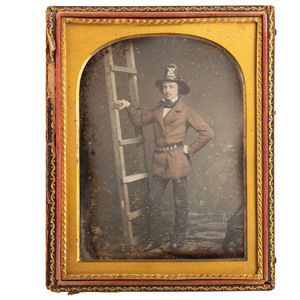 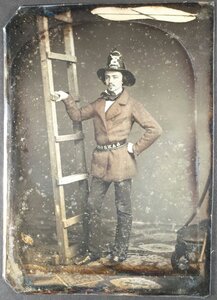 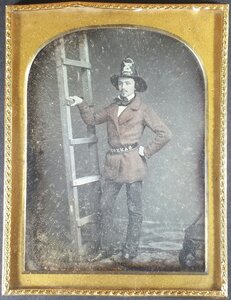 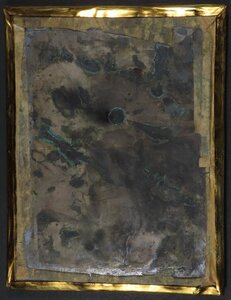 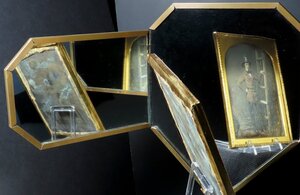 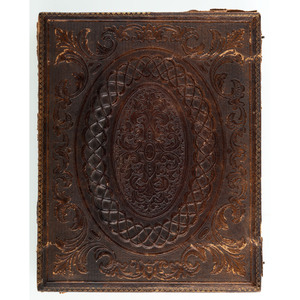 Half plate daguerreotype. Housed in a full leather-clad, wooden case embossed with a geometric design (separated at hinge, exterior surfaces have light to moderate scuffing). Sealed when consigned, cover glass replaced and resealed in May 2021. Scattered mold spiders on plate, line of moderate tarnish on the plate at the mat opening. Photos in order: After conservation; Naked plate; Before conservation; Rear of plate showing intact paper seal; Multi-photo showing the front and rear of the plate together before conservation; Case exterior.

This spectacular image was recently found in the Netherlands, and depicts Walter Van Erven Dorens posed in a red-tinted coat with a leather belt studded with letters spelling "Sansome." His leather helmet ornamented with "Sansome," crossed ladders and the number "3," with the initials "WVED" below. His hand rests on a ladder, perhaps used to adjust a skylight in the photographer’s studio hidden under the mat; it is not of the type used by a fire company.

The Sansome Hook and Ladder No. 3 of San Francisco, was organized on 14 June 1850, primarily by men residing on Sansome street and the surrounding neighborhood. The company’s house was located on Montgomery Street between Jackson and Pacific. By 1855, their ladder truck was the largest in the state and carried 50-foot ladders. Their motto: "Though Last Not Least."

The company was disbanded in 1860.

Walter Van Erven Dorens is listed as a member of Sansome Hook and Ladder No. 3 between 1854-55.

In spite of the fact that the maker of the image is not marked, circumstantial evidence suggests that Van Dorens might have been photographed by daguerrieans Robert H. Vance or James Ford, both of whom had studios within a few blocks of the Sansome Firehouse. Vance’s studio was at the corner of Montgomery and Sacramento streets three blocks west of the firehouse. James Ford’s studio was located two blocks north and west at the corner of Clay and Kearney.

Little is known of Van Dorens. He apparently emigrated from the Netherlands to California during the Gold Rush. His name does not appear on the 1850 or 1860 Federal census, though he received his naturalization papers in January of 1857, and became a United States citizen.

Van Dorens’ name first appears in a San Francisco City Directory in 1856, with his residence listed on the north side of Jackson Street, between Montgomery and Sansome. Along with Samuel E. Paster, he operated a saloon located at 103 Washington Street. We could not locate an 1857 San Francisco directory, but Van Dorens does not appear in the 1858 directory. By the time this directory was published, we assume he had returned to the Netherlands taking this image with him as a memento of his years in California.

Acknowledgments.  Cowan’s is indebted to Mike Novak of San Clemente, California who first identified the Sansome Hook and Ladder Company and then deciphered the letters on Van Doren’s hat, which led to his positive identification.

1856. Colville's San Francisco Directory: For the Year Commencing 1856.  Accessed through the online portal of the San Francisco Public Library.

1856. San Francisco City Directory: For the Year Commencing, October, 1856. Accessed through the online portal of the San Francisco Public Library

"Sansome Hook and Ladder Company No. 3."   Accessed through the online portal of the San Francisco Fire Department Museum, Guardiansofthecity.org

The daguerreotype was professionally conserved in 2021 by George S. Whiteley IV, Atlanta, Georgia. A summary of the treatment is listed below:

Pre-treatment condition: Image—The image has its original paper seal intact, but it is dry and brittle. The irregular-cut plate is re-silvered and has a crimp on the left side with two clipped corners. There is no plate manufacturer’s hallmark. The cover glass is dirty and has dust and some staining underneath. The plate surface has applied color to the subject’s coat and cheeks. There are numerous scattered accretions and imbedded dust throughout the plate surface. There is a line of moderate tarnish on the plate at the mat opening. Of special note, hidden by the mat is the daguerreotypist’s studio skylight diffuser at the upper right corner, supported by a wheeled stand at the lower right. There is heavy chemical staining on the plate verso. Case—The case exterior surfaces have light to moderate scuffing. The interior is dirty with some minor losses to the gilded decorative trim on the case rails. The original hinge is separated.

Treatment: Image—Removed the image package from the case and took documentary photographs straight-on and with a multi-mirror set-up to display the intact hinge with plate recto and verso together. Mechanically removed the original paper hinge, original cover glass and retained the original paper seal remnants and cover glass for the client. Photographed the naked plate straight-on. Gently cleaned the plate surface with compressed air to dislodge any loose accretions and dust. Installed a new custom-cut, single-strength cover glass and sealed the image package with Filmoplast-P90, acid-free, pressure-sensitive tape with a Mylar barrier on the plate verso. Made brief treatment notes on the tape on the plate verso with date. Installed the preserver and took photographs of the completed image package. Installed the remnants of the original paper seal in the case bottom, installed a Mylar barrier and press-fitted the image package back into the case. Case—Lightly dusted the case interior and embossed velvet pad with compressed air.

Documentary "before" and "after" photos of the daguerreotype are included in the attachments.