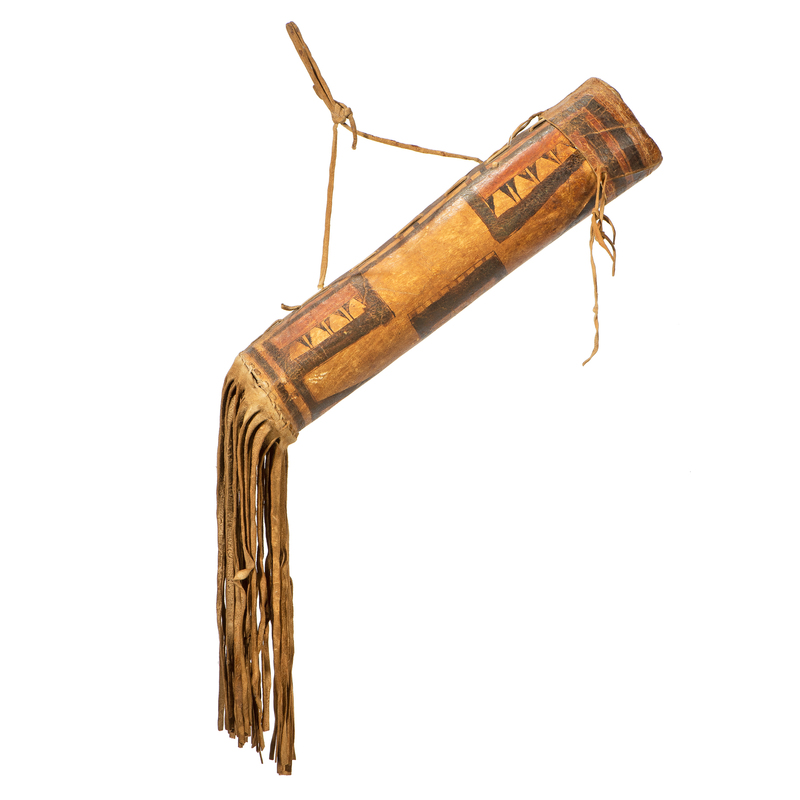 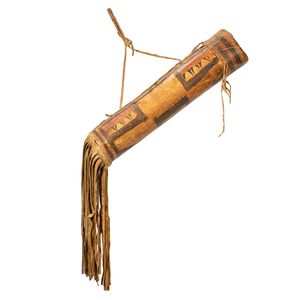 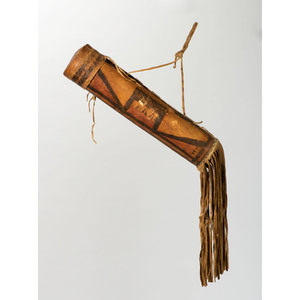 ...Rawhide containers of this general type are well known from Plains Indian collections, but this particular example is of a less common type.  In contrast to the rawhide containers of the northern and central Plains, this example is provided with a fitted cap, long fringes at the bottom, but no such fringes along the side, and it is not tapering from top to bottom.  Containers of this type are known from the Pueblo Indians, who used to sew them carefully with sinew.  This example, however is laced together, and the paint decoration is unlike anything created by Pueblo artists.  Laced examples are known from the Apache, Comanche, and Ute Indians.

Laid out all around the cylinder, the design is a version of the so-called Bear Hands design of the Arapaho; compare the illustration in Morrow, 1975, p. 54.  In this case, however, many little brown triangles are painted in the central vertical column, in the top and bottom parts of the hourglass design, and in the two rectangles extending from the central column.  Rows of short lines extend like a fringe from the outer borders of these two rectangles.  This embellishment of the major pattern with many little trianngles[sic] is a characteristic feature in Plains Apache parfleche painting, particularly noticeable in painting of the Jicarilla (Morrow, 1975, p. 86).  Due to frequent intermarriage there was a strong Pueblo influence in Jicarilla Apache arts and crafts, and the Jicarilla were undoubtedly well acquainted with the Southern Arapaho. Morrow, p. 85, illustrates another Jicarilla parfleche that is painted with an Arapaho-like design.

In view of these observations I attribute a Plains Apache origin to this container; presumably made and painted by a Jicarilla who liked the designs of which she observed among the Arapaho Indians. Examples illustrated by Torrence date from the 1860s to the 1880s, and also this particular container dates back to that period.  The Pueblo Indians used these cylinders to store religions objects, and a similar function has been recorded for the southern Plains tribes.