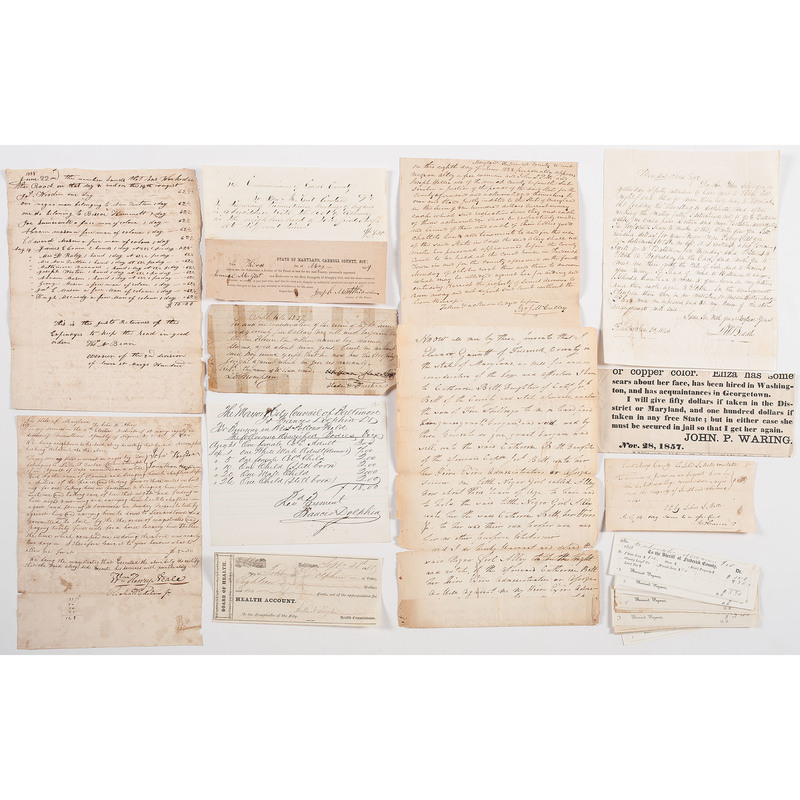 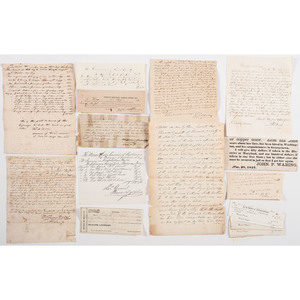 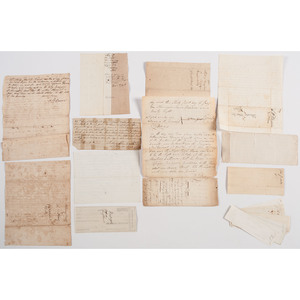 Documents Related to Slavery from Maryland

ADS, 1p, approx. 8 x 10 in., bill and accounting of services by Constable John B. Abey, 1833. State of Maryland. "To my services in the 4th Election District of St. marys county in dispersing tumultuous assembly of negroes...$8.00....To my serving states warrant on negro boy Tom belonging to Luke P. Barber for an attempt of an assault of Rape committed on a white Girl by the name of Dement... taking him in possession & bringing him home with me and taking care of him that night and feeding him night & morning.... and serving 4 summones on Sundry persons to testify against him and carrying him .... down to Leonardtown and committed him to Jail...." Signed by town magistrates Wm. Henry Neale and Richard Edilen Jr.

ALS, 1p, 7.75 x 9.75 in. n.p., Jan. 3d, 1840. To Benedict Jones from L.W. Biddle. Because of "desperate" traveling conditions, Biddle decided not to go to Baltimore, so he makes a proposition of taking the train to Baltimore on Monday and return to Elkton on Wednesday, at which time he will meet Jones with $600 for his "Negro man Perry."

Manuscript bill to the Mayor & City Council of Baltimore from Francis Dolphin "For Burying in West Potters Field the following described Bodies..." Includes one adult colored female and on female colored child, one white male and three other children (two stillborns). Also included is the draft made on the city's "Health Account" to Mr. Dolphin for the amount of the bill, which has been signed by Dolphin as "Recd. Payment."

ADS, 2pp, 8.75 x 14.75 in., Frederick Co., MD, 31 Jan 1798. Eleanor Garrett sells to Catharine Betts, "Daughter of Capt. Jos[ep]h Betts,... one little Negro Girl called Alley now about Three Years of Age,... for and in consideration of the love and affection I have...and...the sum of Five Shillings." Signed by Eleanor Garrett and various JPs and witnesses.

ADS, 1p, approx. 8 x 13 in., Frederick Co., MD, 8 June 1822. "Negros Alley a free woman and John L Potts and Joseph Haller....acknowledged themselves indebted to the State of Maryland in the sum of one hundred dollars current money each...in case the said Alley shall not make her appearance before the County Court....to answer what may be alledged against her for aiding and enticing Harriot the property of James Armour to run away...."

Manuscript bill, 4 x 8 in., affixed to partially printed oath. The bill is for "dispersing tumultous meetings of Negroes...at different times." The printed oath form Carroll Co., Maryland, states that on 3 May 1859 Samuel M. Gist appeared and "made oath on the Holy Evangelly of Almighty God, that the above annexed account as stated, is just and true...." On verso, Gist signs over the amount owed to James Blizzard on 25 Jan. 1860.

Group of 16 tax receipts from Frederick County (no state indicated). Partially printed with space for state and county levies, slave, personal property and land taxes. None of these has a slave tax assessed. All approx. 2 x 6 in. 1857 - 5 receipts; 1858 - 7 receipts; 1859 - 4 receipts.

Manuscript account of "the number hands that has worked on the Road" on June 22 and Aug. 14, 1838, St. Marys County, MD. He lists one man with no limiters, presume white; two slaves and to whom they belong; and three free men of colour for June 22. For Aug. 14, the workers are listed by their owners, seven slaves and three free men.

Plus fragment from runaway slave broadside, 3.75 x 9 in. Some is readable: "Eliza has some scars about her face, has been hired in Washington, and has acquaintances in Georgetown. I will give fifty dollars if taken in the District or Maryland and one hundred dollars if taken in any free State; but in either case she must be secured in jail so that I get her again. John P. Waring / Nov. 28, 1857."