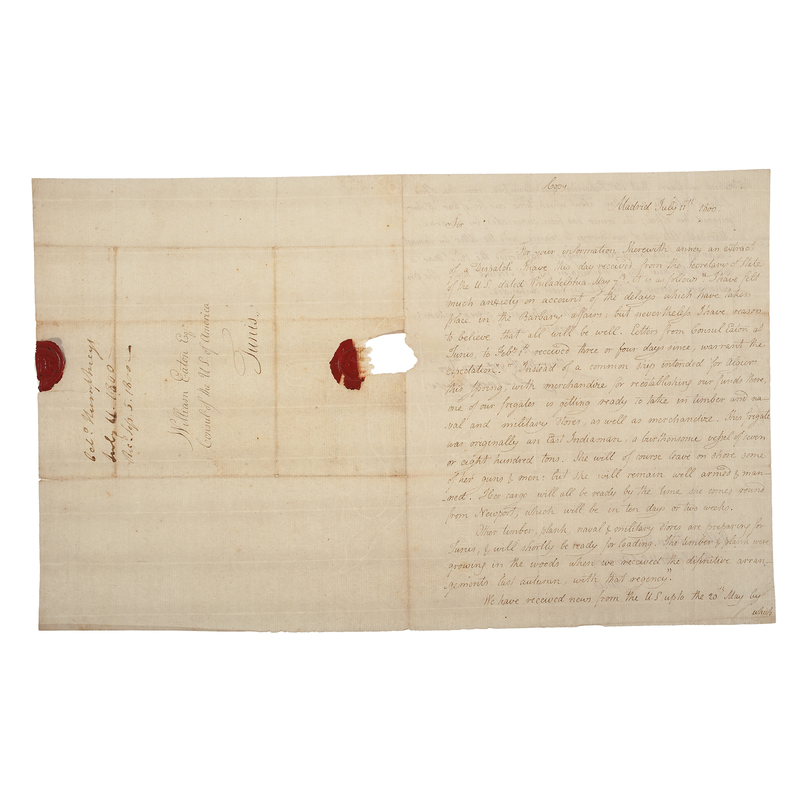 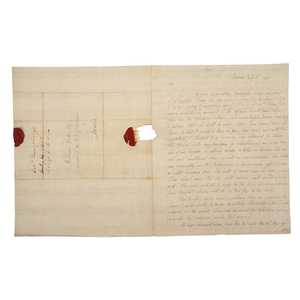 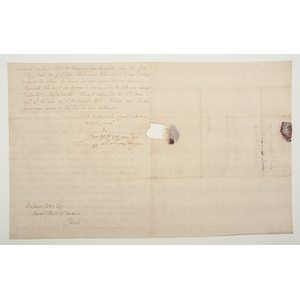 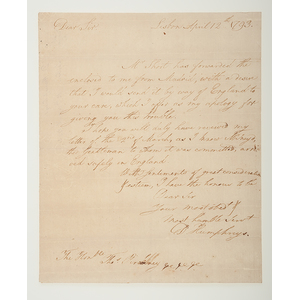 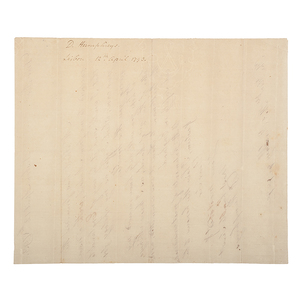 Humphreys, David (1752-1818). Revolutionary War colonel and aide-de-camp to Washington. American minister to Portugal and then to Spain. Lot of 2 ALsS.

Earliest is 1p, Lisbon, April 12, 1793. Signed D. Humphreys, addressed to Thos. Pinckney. This letter is a cover for another that he is delivering to Pinckney by way of Madrid and London.

Second is 2pp, Madrid, July 11, 1800, with integral address leaf. To William Eaton, US Consul at Tunis. Humphreys informs Eaton of preparations in anticipation of attacks from pirates.

Pirates from the Barbary Coast, primarily Tunis, Algiers and Tripoli, had been attacking European shipping for many years. Their main sphere of operation was the Western Mediterranean, but they ranged down the Atlantic coast of Africa, even to South America, and north to Ireland and Iceland. One of their main objectives was the capture of Christians for sale in the North African slave markets as much as for their cargo (if they couldn't get the ransom paid).

After Napoleon's defeat, the US fully expected pirate activity to increase. To this end: Instead of a common ship intended for Algiers this Spring with merchandize for reestablishing our funds there, one of our frigates is getting ready to take in timber and naval and military stores, as well as merchandize.... She will of course leave on shore some of her guns & men: but she will remain well armed & manned....Other timber, plank, naval and military stores are preparing for Tunis... We have received news from the U.S. up to the 20th May by which we learn that Mr. Pickering was dismissed from the office of Secy. of State the 9th of May, about which time our Secy. of War McHenry resigned his office; the former has been superseded by General Marshall, late one of our Envoys to France, and the latter by Samuel Dexter Esqr. of Massachusetts. Congress adjourned the 12th of May to meet at the new city of Washington the 3d of Novembr. next. The Provisionary Army of the U.S. has been disbanded.

And the fear was well-founded. When Thomas Jefferson took office in 1801, the pirates demanded a ransom of $225,000 from the new administration. When the President refused, the Pasha of Tripoli declared war. The first Barbary War was fought between 1801 and 1805, then again in 1815 until 1816 when a settlement was reached by the United Kingdom and the Netherlands.

First with light toning and folds. Second with a hole in address leaf where wax seal was broken, not affecting any text. Some toning on folds, but otherwise very good.