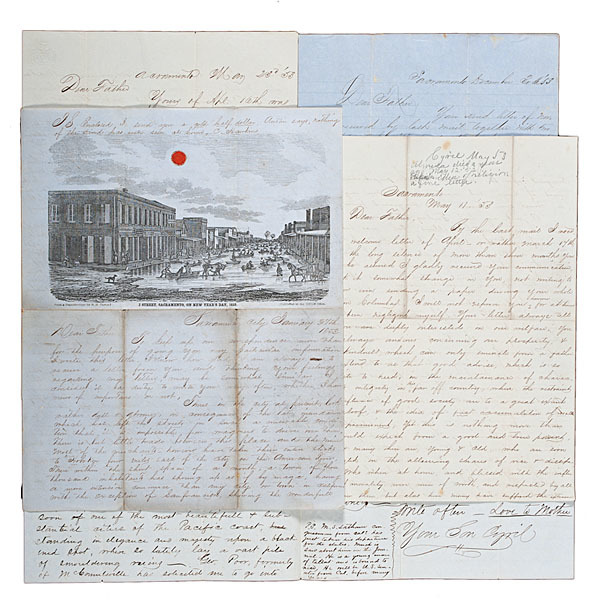 Letter archive of Cyril Hawkins (1832-1902), Ohio politician and lawyer, written during his time in Sacramento, CA, ca 1853-1855, with great content regarding life in California following the initial boom of the Gold Rush. Hawkins would return home around the start of the Civil War and become active in Ohio Republican politics, serving as a clerk in the U.S. House of Representatives, a customs agent at Niagara Falls, and a presidential elector for William McKinley in 1896. Lot includes 10 letters, dated 1853-1855, plus two mounted photographs of Mt. Shasta, ca 1900, 8.5 x 10.5 in. (See also Lots 286, 483-484.)

Jan 27 & 28, 1853, Sacramento, 3pp, on stationery printed with an illustration of Sacramento flooded on New Year's Day, 1853, from a daguerreotype by Vance. Hawkins relates life in Sacramento including the near-impossibility for wagons to drive over the inundated roads, a description of the flood featured in the illustrations, and how the mining-based economy has suffered due to the extreme weather, with exorbitant food prices and greedy monopolists price gouging for all other provisions. He speaks of the happenings back home in Ohio, including the explosion of the Buckeye Belle steamboat and learning of his father's candidacy for Senate through the newspapers. A postscript written the next day describes a mob of three thousand people who gathered to try a man for an "inhuman act upon the body of a dead female," after he was discharged by the sheriff due to there being no law concerning the crime; he was given 100 lashes but allowed to live.

May 11, 1853, Sacramento, 4pp. How many there are, young and old, who are soon entangled in the alluring shams of vice and dissipation, who when at home, and blessed with the influences of morality, were men of worth, and respected by all who knew them, but alas here many have suffered the extreme consequences upon convictions for the worst crimes, and many who have been engaged in crimes more trivial, are disgraced forever. Hawkins then describes three thieves hanged for the murder of one of their comrades. Working as a salesman for Holliday & Co. of St. Joseph, Mo. My inexperience in business retarded my progress in the way of making money for a long time after I came to California, but he believes he can make a respectable fortune if he stays five years. Speaks of not believing in organized religion: I believe the only true religion which emanated from God is that which ever surrounds us - the dictates of conscience.

May 23, 1853, Sacramento, 2.5pp. Speaks at length about California politics. Mentions three steamers which recently arrived from San Francisco carrying thousands of dollars of gold, prominent politicians, entertainers including Lola Montez and several others.

September 30, 1853, Sacramento, 3pp. Says the Sacramento heat was too much so he spent much of the summer in San Francisco, where it is colder in the summer than in the winter. Working as a business agent for the Democratic State Journal. Fire, flood, and dull times have made all kinds of business much worse than it was last summer, but better times are returning again. Geo. Poor, a friend from his hometown of McConnellsville, has offered Hawkins the job of editor at a newspaper he intends to start in Napa. Writes in postscript that newly elected U.S. Representative Milton Latham is a young man of talent and is bound to rise, he will be U.S. Senator from Cal before many years. Hawkins turned out to be correct, as Latham was elected governor in 1860 but resigned after five days to fill the senate seat of David Broderick who was killed in a duel.

December 30, 1853, Sacramento, 3pp. You will find more than I could relate in the Democratic Journal, which I send you regularly, and am still connected with this paper as an agent. Speaking of upcoming U.S. Senate candidate David C. Broderick: [He] is a man I do not like, he is a great intriguer and party leader but not a polished statesman nor honest man. He has always been supported by prize fighters and gamblers. Broderick was elected in 1856, and was killed in a duel while in office.

March 15, 1855, Sacramento, 4pp. Mentions the failure of several substantial banks. Speaks of the current session of the California legislature which, like the one in Ohio, has never exhibited extraordinary capacity for doing business with dispatch unless it was of personal pecuniary benefit. Talks of excitement around the Kern River Mines, but says some have returned declaring it a grand humbug. Describes the natural beauty of California and the energy of the settlers, declaring that in just a few years it will be at the head of the list in greatness, wealth, and prosperity, and says the same of Sacramento. Also speaks of gambling suppression and other issues.

May 15, 1855, Sacramento, 2pp. Hawkins writes that he has been working with General James W. Denver, Secretary of State of California, who established a permanent clerkship for him. He states that he recently submitted a report on the appropriations of the state legislature for the recent session, which totaled $11,000, which he sees as a waste as they accomplished very little. Mentions tensions between Spain and the United States. Speculates about candidates for election in the fall.

September 4, 1855, Sacramento, 4pp, on State of California, City of Sacramento, Office of the Secretary of State letterhead. Written on the eve of the gubernatorial election, Cyril says that he will be voting for a non-Democrat for the first -- and "hopefully" last -- time (however he would go on to be a Republican for the rest of his life). He has been disappointed with the incumbent John Bigler and intends to vote for Know Nothing candidate J. Neely Johnson (Johnson won). Hawkins decries Salmon P. Chase's nomination for Governor of Ohio: if there is a class of men who deserve the contempt of every true-hearted American it is that band of disunion agitators - the abolitionists of the North; why should they middle with the subject of slavery except by confining it to its present limits as much as possible, and in regard to new states and territories let the people there decide...Slavery doubtless is an evil and if we were entirely rid of it the Union would be even more prosperous than it is now, and eventually it might possibly die away of itself if undisturbed, but to talk of suppressing it immediately is like fanning a fire...

October 2, 1855, Sacramento, 4pp. Speaks at length about California politics again, comparing results of the recent elections to his predictions, including the success of the Know Nothings, etc. Discusses General Denver being at "loggerheads" with Bigler over recent events. Cyril says Denver is heading east and will be stopping in McConnelsville on the way, and he expects the elder Mr. Hawkins to be a courteous host. Talks of Milton Latham being appointed Collector of Ports.

Provenance:Descended Directly in the Family of Cyril Hawkins