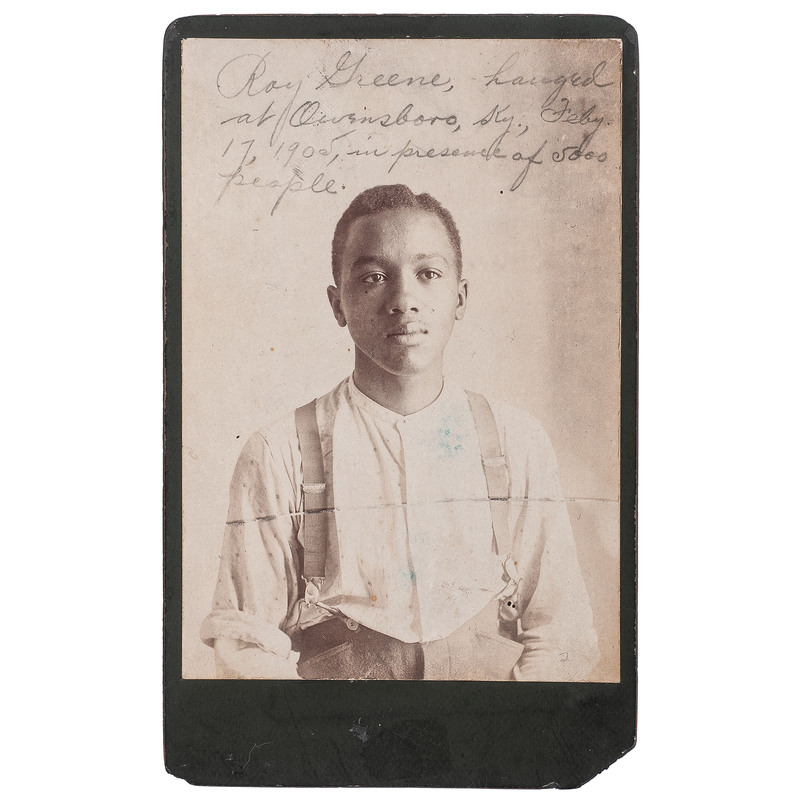 Green was found guilty of the grisly murder of James Coomes for $28. Green’s last words were sage advice to “mind your mothers and leave whiskey out.”

Details of the crime follow: “…Roy Green, a 17 ½-year-old black man, originally from Rockport, Indiana, had beaten to death James Coomes of Slaughterville in Webster County on July 31, 1904, in an old shack at the fairgrounds. He then stole $28.00 and made off. He visited his sister in Evansville for a week before traveling to Louisville, where he was arrested on August 12. Green confessed to his crime while he was being transported back to Owensboro. He told police that after killing Coomes with the plank, he had pulled off a large splinter and forced it through the victim’s throat and into the ground. In his statement, Green said he was drunk at the time on whiskey that Coomes had given him. The Owensboro jail had an armed guard to prevent Green being lynched. The trial took place between Wednesday, August 31, and Saturday, September 3, 1904, with Commonwealth’s Attorney Ben D. Ringo, prosecuting, assisted by County Attorney LaVega Clements. Green pleaded not guilty and did not take the stand in his defense. The jury took just 31 minutes to reach a verdict and recommend death. There were cheers in the court from the witnesses when the verdict was read. An appeal to the Kentucky Court of Appeals was denied on January 13, 1905, and on January 20, Governor Beckham set for February 17 as the execution date.

Green remained in good spirits and ate well while awaiting execution. The gallows was erected on the north side of the County Jail, behind a twenty feet high wooden fence. Fifty witnesses, including several women, had obtained witness tickets. One of these ladies had previously witnessed a double execution by guillotine in France and was keen to see an American execution. It was reported that several hundred men and women sought a view from the knotholes of the wooden fence which surrounded the gallows. At dawn on Friday, February 17, 1905, Green mounted the gallows where he addressed the witnesses, stating, “Good people, I want to say that I did this awful crime and I have repented of it. Mind what your mothers tell you and leave whiskey out. Don’t do as I have done, for I have done wrong this far.” Deputy Sheriff, Harry Cooper, sprang the trap at 7 am and Green took eleven minutes to die, his neck not being broken by the drop.”