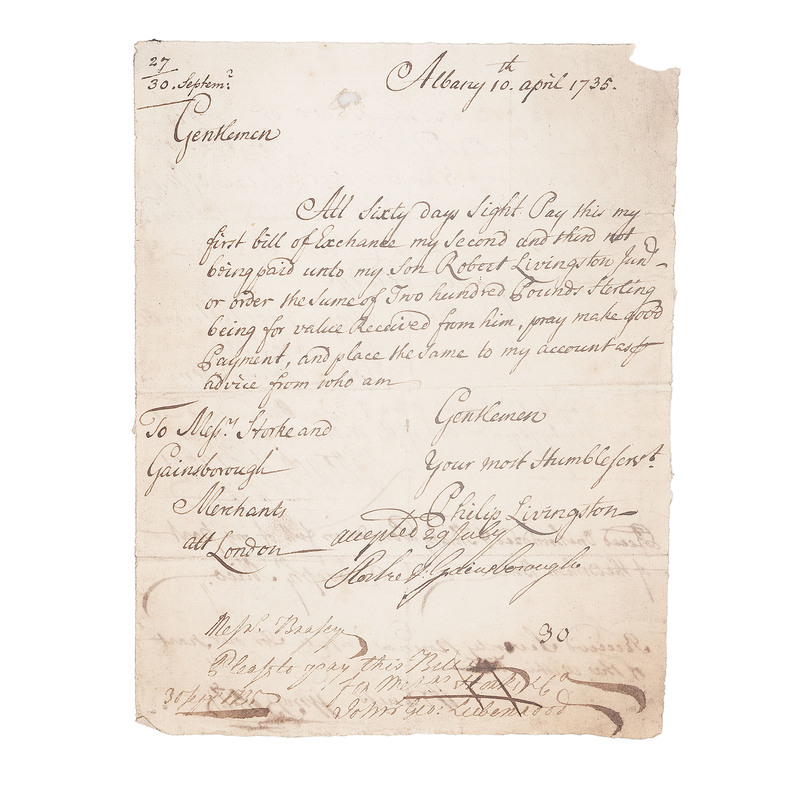 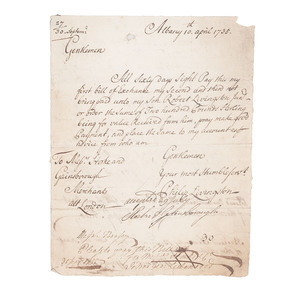 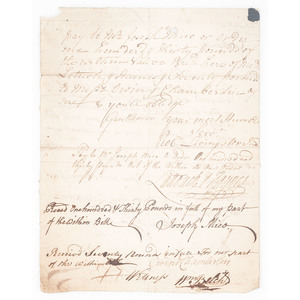 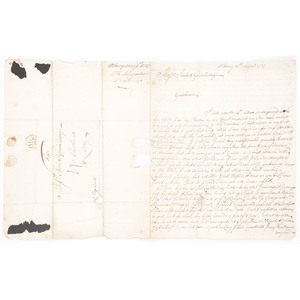 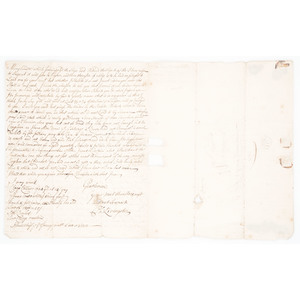 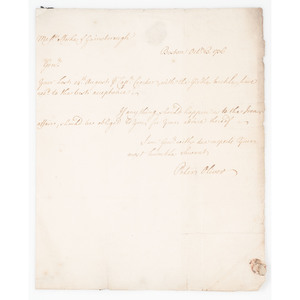 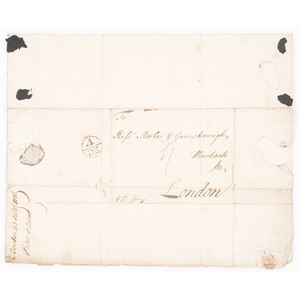 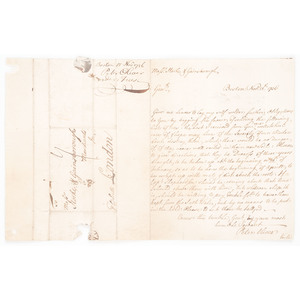 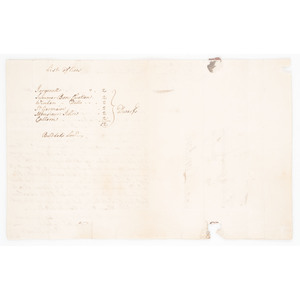 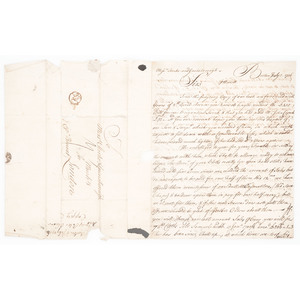 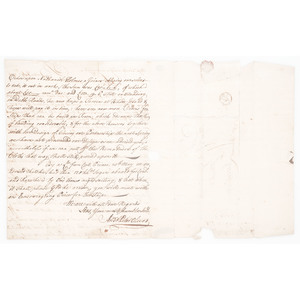 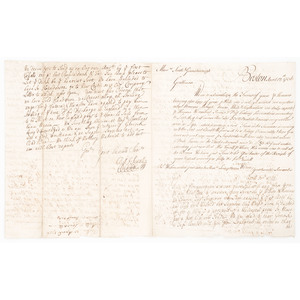 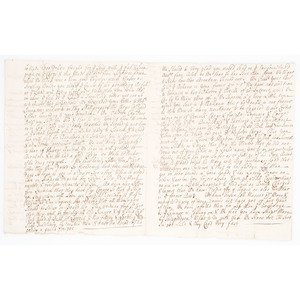 Correspondence with Storke and Gainsborough, London, from Philip Livingston, Andrew and Peter Oliver, and Others

Lot of 6 letters written to the firm of Storke and Gainsborough, which seems to have specialized in trading with the North American colonies.

The first is dated Albany, April 10, 1735. To Messrs. Storke and Gainsborough, Merchants, London. ALS Philip Livingston (1686 - 1749), requesting they credit his account 200 pounds sterling. Accepted by Storke & Gainsborough. On verso is a request by Robert Livingston Jr (?) (1708-1790) to pay Joseph Mico 130 pounds, out of that owed to Lattouch & Haynes (Letush & Haines in his letter) and 70 pounds to Owen & Chamberlin. Then each has endorsed and signed for their part - Lattouch & Haynes, Joseph Mico, Owen & Chamberlin witnessed by Wm. Belch.

ALS, 2pp, Philip Livingston, Albany, August 10, 1737, to Storke & Gainsborough. The letter has quite a bit of "short hand" references, but Livingston seems to be trying to arrange a purchase of beaver pelts out of Canada. At the end he also places an order for cheap calico, muslin, etc.

ADS, 1p, Boston, Oct. 23, 1736. To Storke & Gainsborough, informing them that the last (shipment?) was received and accepted. Signed Peter Oliver.

ALS, 2pp, Boston, Nov. 18, 1736. To Storke & Gainsborough from Peter Oliver. Placing an order for trees with instructions on when they need to arrive, etc. "Please to give directions, that they be Dwards of three years draught, to be taken up abt. the beginning on 16th(?) of February, so as to be here the beginning of Aprill; to be wrapt up with mats of dirt about the roots; If Capt Shepherdson shuld be coming about that time I should leave them with him, but whatever ship it is should be willing to pay double frt. to have them kept from the salt water, but by no means to be put in the hold." Second page with the trees ordered.

ALS, 4pp, Boston, April 12, 1736 and April 30, 1736. To Storke & Gainsborough from Bill & Sewall. Concerning the last shipment from them. The company notes in a couple places that they have forwarded their letter to Messrs. Livingston.

Philip Livingston (1686 - 1749) was the son of Robert Livingston the Elder (1654-1728) (Livingston Manor) and brother of Robert Livingston (1688-1775), sometimes known as Robert Livingston of Clermont (Manor). Philip also named one of his sons Robert (1708-1790), the last Lord of Livingston Manor. Unfortunately, Robert also named one of his sons Robert (1718-1775) who is also sometimes known as "Junior," but more often "The Judge." His son, another Robert (1746-1813), was known as "The Chancellor," and was part of the Committee of Five who helped write the Declaration of Independence (although he was not able to sign it). He would later also help negotiate the Louisiana Purchase. Philip named one of his sons for himself (Philip, 1716-1778). He was able to sign the Declaration of Independence in place of Robert. Another brother, William (1723-1790) signed also as a representative of New Jersey.

Peter Oliver was born in Boston in 1713. He graduated from Harvard College (1730) and went into the importing business with his brother Andrew. Oliver later bought an iron works in Massachusetts which brought him financial success. He became Chief Justice of the Superior Court of the Massachusetts Bay colony. During the Revolution the Olivers were Loyalists and subject to threats and harassment even before the Revolution broke out. Peter left for England in 1776 where he lived until his death in 1795, having lost everything he had worked for in the colonies.

Andrew Oliver was also born in Boston in 1706 and graduated from Harvard six years before his younger brother. Both brothers supported the Stamp Act, and thought the colonists should do more to support Britain. The Sons of Liberty (and their predecessors) hanged Andrew in effigy from the Liberty Tree, ransacked his home and offices, and forced him to resign the commission he had received to administer the Stamp Act. Oliver died in 1774, before the war was fully underway. However, the political climate was such that few friends or relatives dared attend his funeral.

Most very good, but all have spots of black paper on verso where they were apparently affixed to pages in an album. Some of the pages have notes by multiple people with expected handling wear and occasional ink stains.