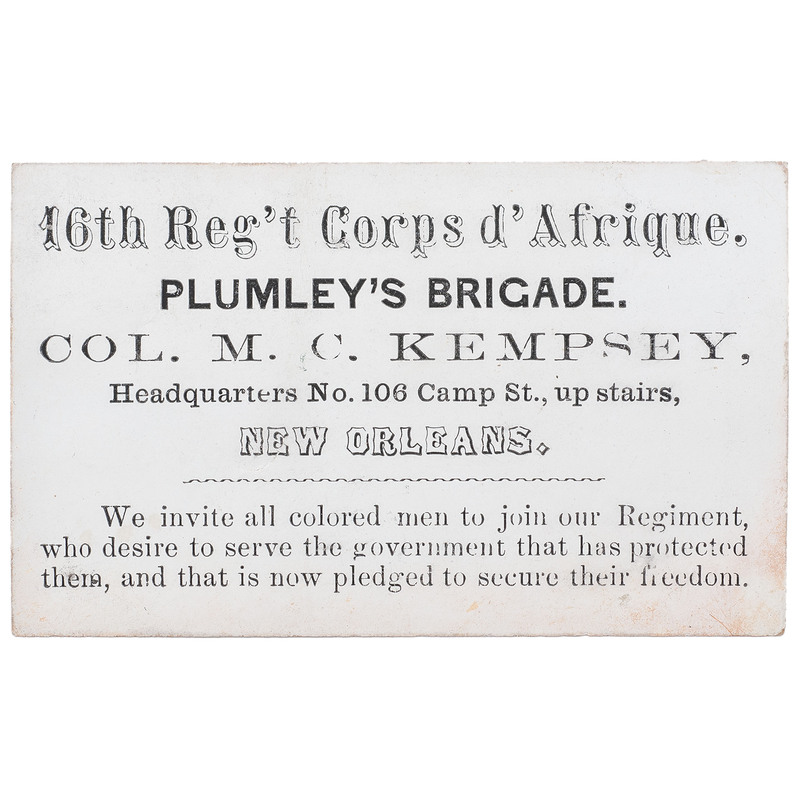 The card references, “Plumley’s Brigade” and “Col. M.C. Kempsey” – referring to Matthew C. Kempsey (1832-1895), a pastor, originally born in Ireland, who first served in the Union when he was enlisted as a chaplain on Dec. 18, 1862, in Albany, New York and commissioned into the 176th New York Infantry. He was discharged on October 16, 1863, possibly when he was attached to the 16th Corps d’Afrique. After the war, he moved west to Iowa and according to the 1880 census, worked as a merchant. “Plumley’s Brigade” likely refers to Mardon Wilson Plumley (alternatively spelled Mordon Plumly), who is listed in official reports as the commanding officer of the 14th Regiment of the Corps d’Afrique, later becoming consolidated into the 86th USCT. After the war, Plumley moved west receiving a land grant on December 15, 1879, for a parcel of land in Sonoma, California near Mt. Diablo.

In formal reports, the 14th Infantry under Col. Plumley and the 16th Infantry under Col. Kempsey were a part of the First Brigade of the Second Division of the Corps d’Afrique. The report noted that they were headquartered at Port Hudson, Louisiana and that the regiments were dispersed with the 14th going to Barrancas, Florida and the 16th to Texas.

Slight discoloration in lower right, verso with a light residue.