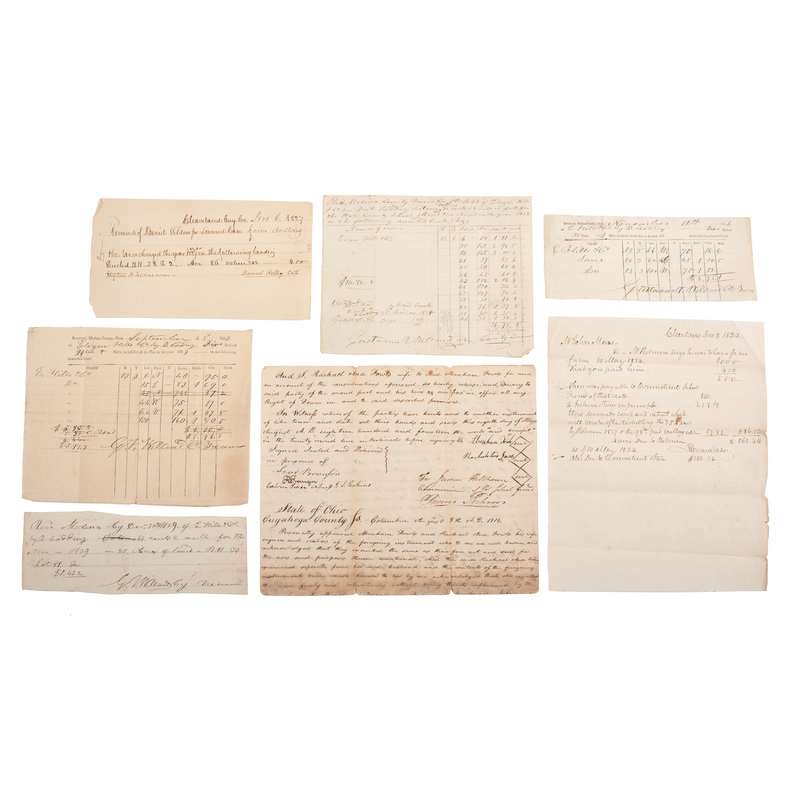 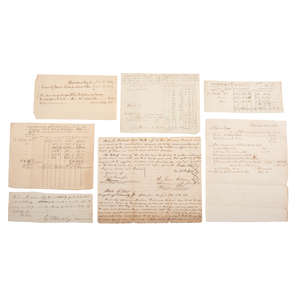 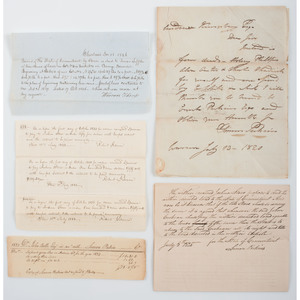 Lot of 27 documents, both manuscript and partially printed, relating to the Connecticut Land Company, its shareholders, and other land transactions including receipts, account sheets, agreements, reports, promissory notes, and correspondence, in the Connecticut Western Reserve, 1804-1845. Many of these documents are signed by important pioneers, surveyors, legislators, and civic officials of early Northeast Ohio, as well as veterans of the Revolutionary War and the War of 1812.

The Connecticut Land Company was formed on September 5, 1795 by a group of investors who were authorized by the state to purchase and resell the territory in Northeast Ohio known as the Connecticut Western Reserve. Connecticut was one of several states with claims to land in this region, which was set aside for citizens whose homes had been destroyed during the American Revolution. Connecticut sold the eastern portion of the Reserve to the Connecticut Land Company for $1.2 million, which was allocated for Connecticut’s public education system. The company organized a group of surveyors to divide the land into townships, and Moses Cleaveland led the first of these survey parties to the Reserve in 1796. Despite its proximity to Lake Erie, settlers were reluctant to purchase the land because of concerns over the legality of titles and governance. Further, the company made no provisions for the future development of the land, leaving the organization of schools, churches, and other amenities up to the buyers. Plagued by low sales figures and general mismanagement, the Connecticut Land Company was dissolved on January 5, 1809, and the remaining land was divided among the investors. The Western Reserve was finally settled after the War of 1812, reigniting interest in the purchase of land in the region.

Documents include those signed by:

Beers, Seth Preston (1781-1863). Connecticut lawyer and politician, who served as the state’s attorney general, senator, and Speaker of the State House of Representatives. Beers also held the position of Commissioner of the Connecticut School Fund for twenty-five years. ALS, “S.P. Beers,” 1p, 15.5 x 12.25 in., Litchfield, CT. October 5, 1827. Addressed to Isaac Spencer, State Treasurer of Connecticut (1818-1835). Content related to the arrival of General Simon Perkins in Hartford and the anticipated departure of Captain Easterbrook for the West.

·         Partially printed DS as agent with the Connecticut Land Bank, where Case worked for twenty-eight years, “Leonard Case,” 1p with manuscript notations on verso, 10.5 x 9.25 in. April 1, 1833. Article of Agreement between Case and Alfred Minns, concerning the purchase of land in the Connecticut Western Reserve for $318.60, with annual interest. Verso inscriptions indicate that the land and remaining balance were twice transferred, with the final payment received on October 23, 1841.

·         Partially printed DS, “Leonard Case, agent,” brokering the sale of 200 acres of land in Cuyahoga county to John Baldwin, an educator who would later establish Baldwin Institute (later Baldwin University) in Berea, OH, for $985.00. Notations and signatures on verso record payments received by both Case and Seth Preston Beers.

Kingsbury, Andrew (1759-1837). Revolutionary War veteran and State Treasurer of Connecticut (1794-1818). Manuscript account sheet, 1p with signed note (“AK”) on inside of blank leaves, 14.25 x 12 in., Hartford, CT. April 2, 1816. Lists Connecticut Reserve deeds to be delivered to Simon Perkins. In the note, Kingsbury requests that the deed be recorded “in the proper offices” and then returned to him “by some safe person.”

Kirtland, Turhand (1755-1844). Revolutionary War veteran and Ohio Territory pioneer and surveyor, responsible for laying out the land of the Western Reserve for the Connecticut Land Company. Appointed Judge of Trumbull County in 1800. Handwritten certificate of land value, signed “Turhand Kirtland,” 1p, 8.875 x 9.5 in., “Poland, County of Trumbull, State of Ohio.” May 13, 1819.

Perkins, Simon (177-1844). Settler, surveyor, and businessman in the Western Reserve. Brigadier-general during the War of 1812 and co-founder of the city of Akron (1825). President of the Western Reserve Bank and member of the Ohio Board of Canal Commissioners, where he worked to raise funds for canal building and was responsible in part for the planning of the Erie Canal. ALS, “Simon Perkins,”  1p, 7.5 x 9.75 in. July 13, 1820. Addressed to Andrew Kingsbury.

Stow, Joshua (1762-1842). Founder of Stow, Ohio and original shareholder in the Connecticut Land Company. Member of Moses Cleaveland’s survey team in the Western Reserve and composer of Article Seven of the Connecticut state constitution.

·         Partially printed DS, “J. Stow,” 1p with verso notations, 7.5 x 12.25 in., “Cleaveland, Ohio.” July 1825. Articles of Agreement between Stow and Stephen Robinson of Bedford, Ohio concerning the sale of fifty acres for $368.69, which shall be allocated “for the use and benefit of the School Fund of said state of Connecticut.” Seth Preston Beers has signed and dated the verso, as Commissioner of the Connecticut School Fund.

·         Partially printed DS, “J. Stow,” 1p with verso inscription, 7.75 x 12.25 in. July 8, 1825. Articles of Agreement between Stow and John Cockran of Stow, Ohio concerning the sale of thirty-two acres for 167.00. Simon Perkins has signed and dated the reverse for the state of Connecticut, which would oversee the land until Cockran supplied the bond as described in the initial agreement.