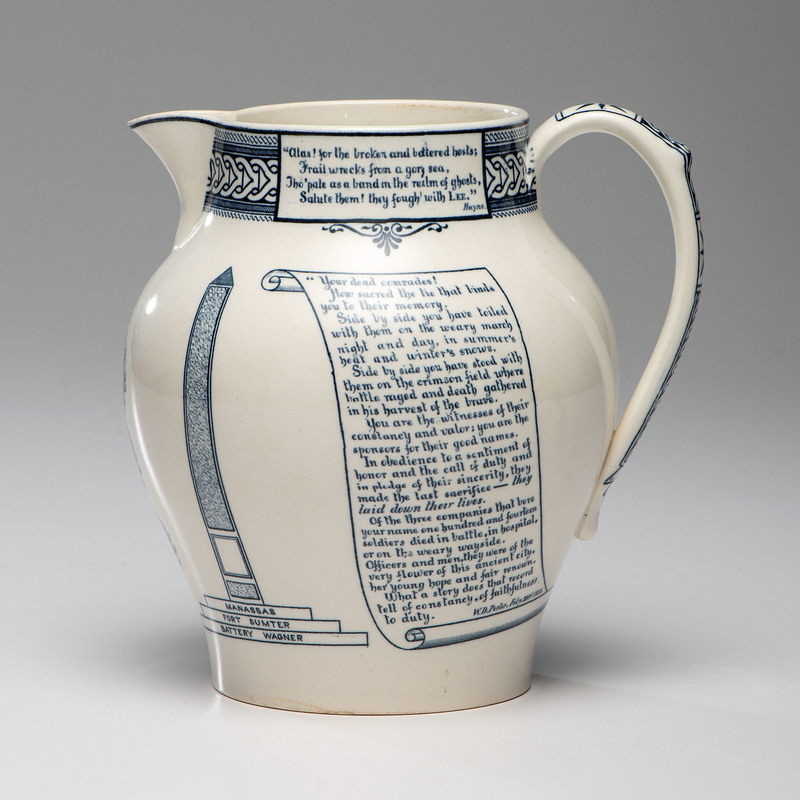 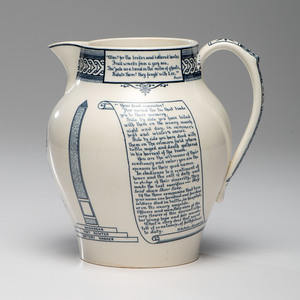 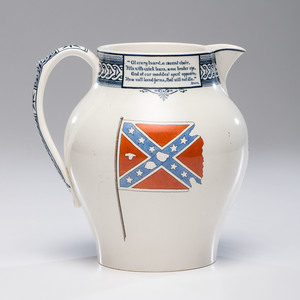 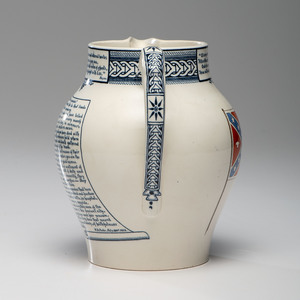 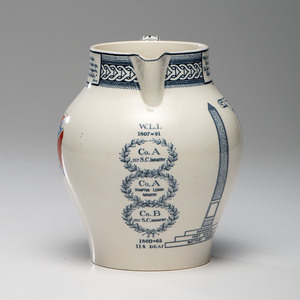 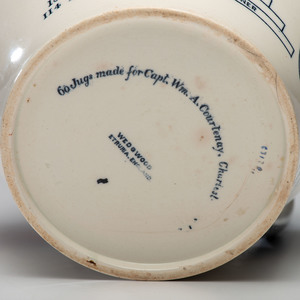 Rare ornamental queensware pitcher, approx. 8 in. high x 8.5 in. at widest point, commissioned by Confederate soldier and mayor of Charleston, SC, William Ashmead Courtenay (1831-1908), to commemorate the services of the Washington Light Infantry during the Civil War, with the following mark on base: "60 Jugs made for Capt. Wm. A. Courtenay, Charleston, SC / Wedgwood / Etruria, England," featuring navy blue transferware, including decorative pattern along top edge and handle of pitcher, combined with text about the Washington Light Infantry, excerpts from poems or phrases written or stated by Southerners, including Paul Hamilton Hayne, John Burns, and W.D. Porter, plus a depiction of the WLI monument and a red, blue, and black transfer of a tattered Flag of the Army of Tennessee.

Inscriptions below the spout provide information on the WLI, including the year of its formation and the companies it consisted of: "1807=91 / Co. A 25th SC Infantry / Co. A Hampton Legion Infantry / Co. B 25th SC Infantry / 1860=65 / 114 Dead." While the Flag of the Army of the Tennessee is depicted to the left of the list, the grey granite obelisk that was erected in 1891 in honor of the Civil War service of the WLI and stands in Washington Square, Charleston, SC, is depicted to the right, with the following battles listed at its base "Manassas / Fort Sumter / Battery Wagner." To the right of the monument, an unrolled scroll features a dramatic statement from South Carolina politician W.D. Porter, dated Feb. 22, 1875, reading in part: "Of the three companies that bore your name one hundred and fourteen soldiers died in battle, in hospital, or on the weary wayside. Officers and men, they were of the very flower of this ancient city, her young hope and fair renown. What a story does that record tell of constancy, of faithfulness to duty." Within the decorative border that lines the top edge of the pitcher, an excerpt from Paul Hamilton Hayne's patriotic poem The Broken Battalions is featured as well as a portion of John Burn's (incorrectly spelled Bruns on the pitcher) inscription, which is included on the WLI monument.

The Washington Light Infantry is one of America's oldest militia units, which was organized in Charleston, SC in 1807 and named in honor of George Washington. Since its inception, the WLI has participated in every major war that the US has fought, including the War of 1812, the Seminole Wars in Florida, the Mexican-American War, the Civil War, and World Wars I and II. In 1842, the WLI also helped to establish the South Carolina Military Academy, also known as the Citadel.

At the start of the Civil War, when South Carolina seceded from the Union in 1861, the WLI reformed into three different companies, including Co. A and B of the 25th SC Infantry, and Co. A, the Hampton Legion Infantry, which are acknowledged on the pitcher. The companies served in the Confederate Army and engaged in several battles, including First and Second Manassas, Sharpsburg, and Appomattox Court House. Following the war, survivors returned to Charleston and helped to reopen the Citadel while also establishing a WLI Charitable Association to assist Confederate veterans and their families.

William Ashmead Courtenay (1831-1908) was a member of the WLI prior to the Civil War, and when South Carolina seceded, he enlisted as a private in Co. B, 8th SC Infantry, leaving most of his compatriots behind. During the war, Courtenay participated in battles at First Bull Run, Fredericksburg, Gettysburg, and Chickamauga, and upon his return to Virginia, he was captured and served as a P.O.W. at Johnson's Island until the war's end. After taking an oath of allegiance in 1865, Courtenay was allowed to return to South Carolina. He became active in the shipping business, acted as President of the Charleston Chamber of Commerce for the three years, and served as Mayor of Charleston from 1879-1887. In addition, Courtenay was a member of the Executive Committee of the WLI, and he played a major role not only in producing the commemorative WLI pitcher, but also in helping to raise money to build the WLI monument at Washington Square.

A fine pitcher honoring one of the South Carolina's most storied 19th century military units.

Overall very fine condition with very minor wear to rim near spout and underside of base.