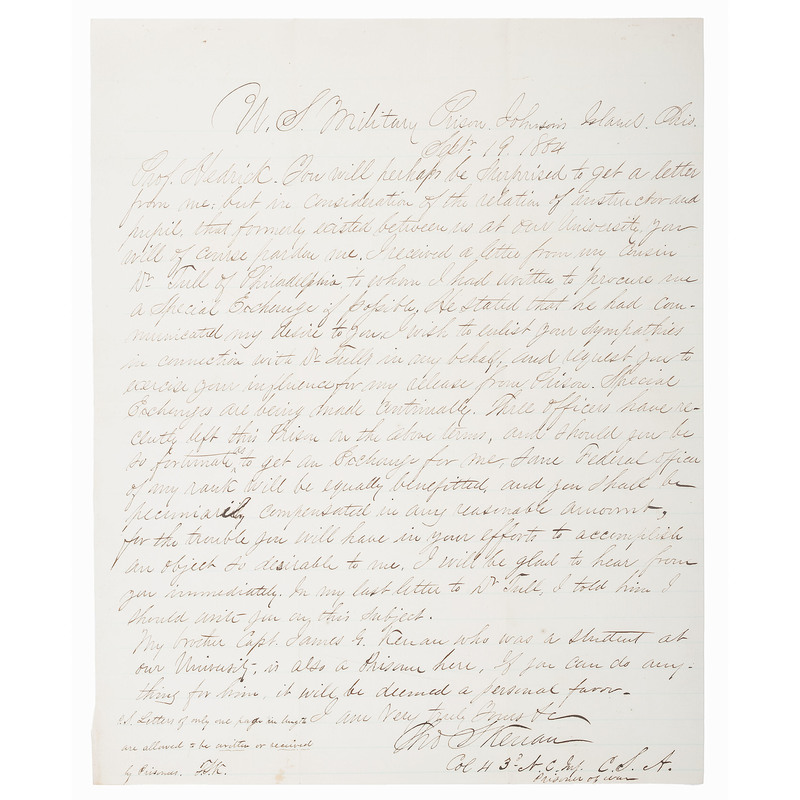 Kenan, Colonel Thomas S. ALS, 1p, 7.5 x 9.75 in., "US Military Prison, Johnson's Island, Ohio." September 19, 1864. Addressed to "Professor Kedrick," one of Kenan's former professors at the University of North Carolina. Kenan's cousin, Dr. Tull, of Philadelphia, PA, knew Professor Kedrick, and in this letter, Kenan asks Kedrick "to exercise your influence for my release from prison. Special exchanges are being made continually. Three officers have recently left this prison on the above terms and should you be so fortunate as to get an exchange for me, & one Federal Officer of my rank, will be equally benefited and you shall be pecuniarily compensated. . . My brother, Capt. Jame G. Kenan, who was a student at our University is also a prisoner here. If you can do anything for him, it will be deemed a personal favor."

Kenan (1838-1911), a young lawyer from Duplin County, NC, enlisted on April 15, 1861 with Company C of the 12th North Carolina Infantry. He was later commissioned to Company A of the 43rd North Carolina, of which Kenan was elected lieutenant colonel before ultimately rising to the rank of colonel on August 24, 1862. After serving in several key operations, Kenan and his regiment were called to Fredericksburg, VA and acted with the cavalry supports at Brandy Station and Berryville. They then marched into Pennsylvania and reached Gettysburg on July 1, 1863. After gallantly leading his men for several days, Kenan was wounded severely on July 3 and captured the following day with other wounded men in the ambulance train. He was confined to Johnson's Island prison from August 22, 1863 until March 14, 1864. After a transfer to Point Lookout, MD, Kenan was exchanged to Cox Landing, VA and finally paroled in Charlotte, NC on May 12, 1865.