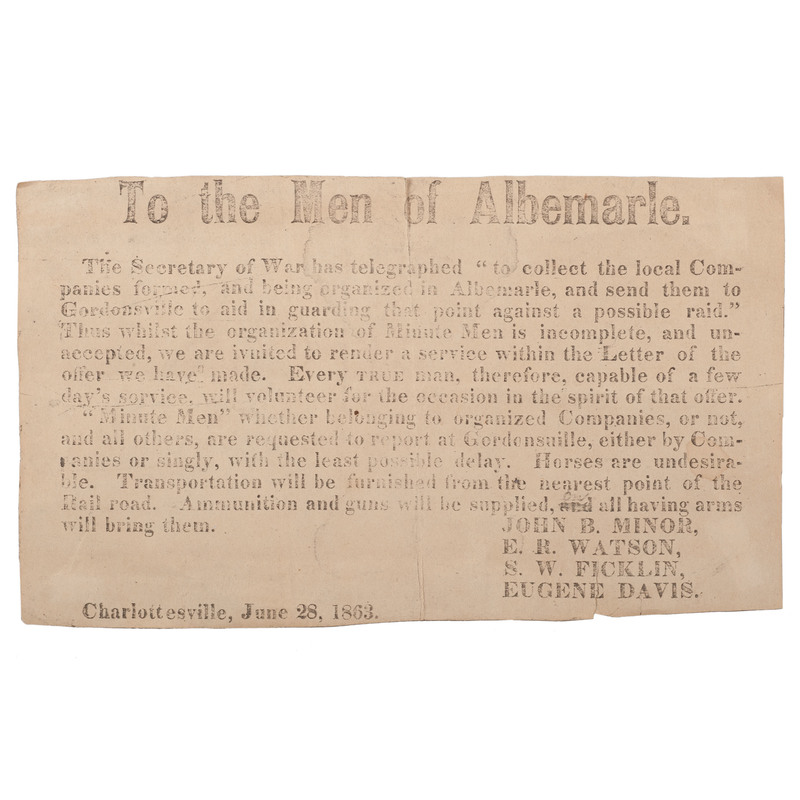 Confederate 1863 Broadside, To the Men of Albemarle

This Secretary of War has telegraphed 'to collect the local Companies formed, and being organized in Albemarle, and send them to Gordonsville to aid in guarding that point against a possible raid.' Thus whilst the organization of Minute Men is incomplete, and unaccepted, we are ivnited [sic] to render a service within the Letter of the offer we have made. Every True man, therefore, capable of a few day's service, will volunteer for the occasion in the spirit of that offer. / 'Minute Men' whether belonging to organized Companies, or not, and all others, are requested to report at Gordonsuille [sic], either by Companies or singly, with the least possible delay. Horses are undesirable. Transportation will be furnished from the nearest point of the Rail road. Ammunition and guns will be supplied, and all having arms will bring them.

Gordonsville, VA was a vitally important town during the Civil War due to its close proximity to the Virginia Central Railroad. The Confederates heavily relied upon Gordonsville and the surrounding rail lines for troop mobility and the transfer of supplies. Though Gordonsville was threatened numerous times with raids and attacks, the town emerged from the Civil War largely intact due to the effective protection of Confederate troops. Perhaps the most notable of these threats was a raid led by Major General Philip Sheridan toward Gordonsville and nearby Charlottesville, which was successfully halted by Wade Hampton's Confederate cavalry near Trevilian Station.

Broadside with some tearing and separation at edges, with text fading and some discoloration in certain spots. One word is crossed out and written over, though the original text is still visible.