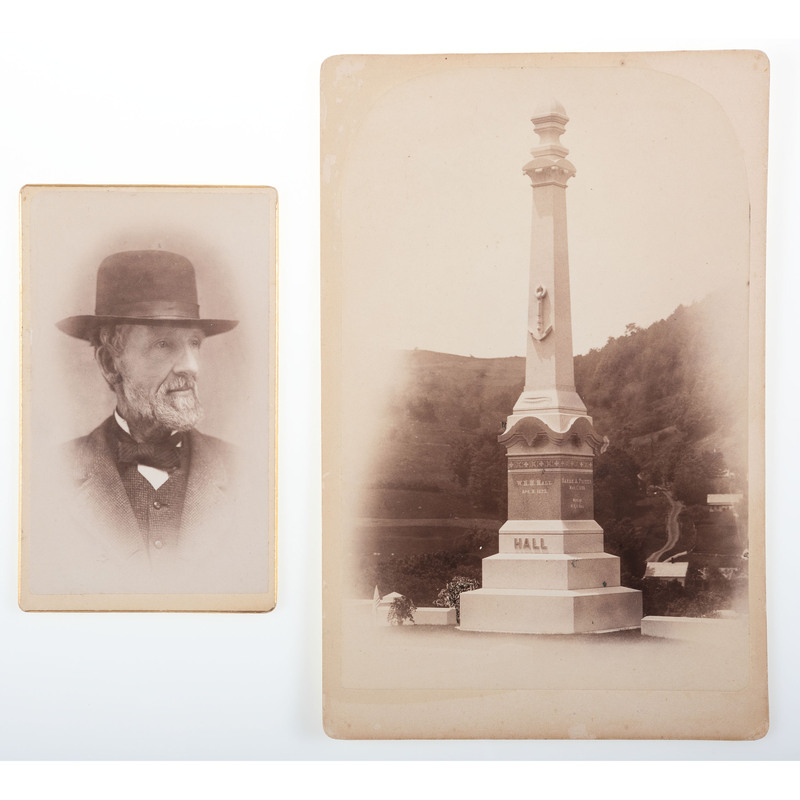 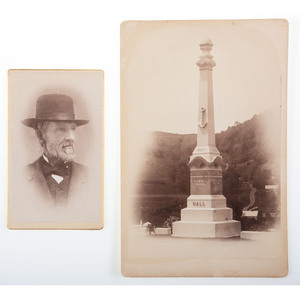 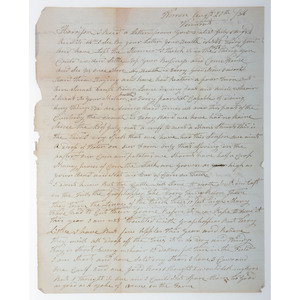 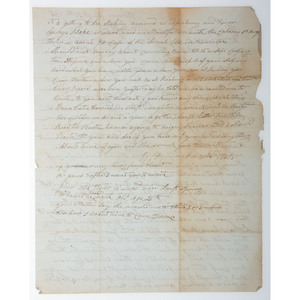 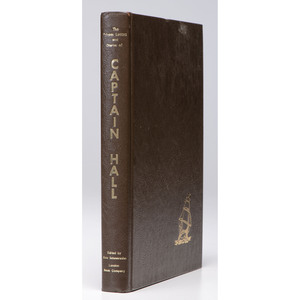 Cabinet card of the Hall monument at Chelsea(?), Vermont, where W.H.H. Hall died.

CDV of Hall taken about 1883 according to manuscript note on verso.

Lot includes some research material as well, mostly later vouchers for documents (eg., paper giving dates of marriage for John Hall - his grandfather). The elder Hall served in the Revolutionary War. W.H.H. Hall was born in Randolph, VT in 1823. His parents moved to Chelsea in 1825. Beginning in 1844, he attended the University there, remaining nearly three years. He bought a farm in Warren, VT and moved his parents there. He taught school for a year in Campbellsburg, KY, then returned to Warren. In 1849 he went to California. Although he did try his hand at mining in early 1850, he worked at a hotel in San Francisco initially. He nearly became a victim of a fire that swept through the city in June. Soon after this he went to Oregon and assisted with the construction of a steamer, the Lot Whitcomb. He served on this steamer as purser, then later as pilot. He returned to Warren in 1861 where he offered his services to the Union army. He was commissioned captain in the 6th Vermont Infantry. He was stricken with a fever and forced to resign in April the following year. He returned to Oregon for a few years. After the end of the Civil War he managed two "oil farms" in Pennsylvania. His health failed again, and he returned to Chelsea where he remained until his death. There he served as vice president of a bank, was active in politics (as a Democrat), commanded a GAR post and was a member of a number of other organizations (i.e. California Pioneers of 1849). He did marry Sarah Foster in 1856, and the couple had two children, a girl, who married and lived in Chelsea, and a son who died of an accidental gunshot in 1882. Sarah died in 1897 and Harry in 1907.