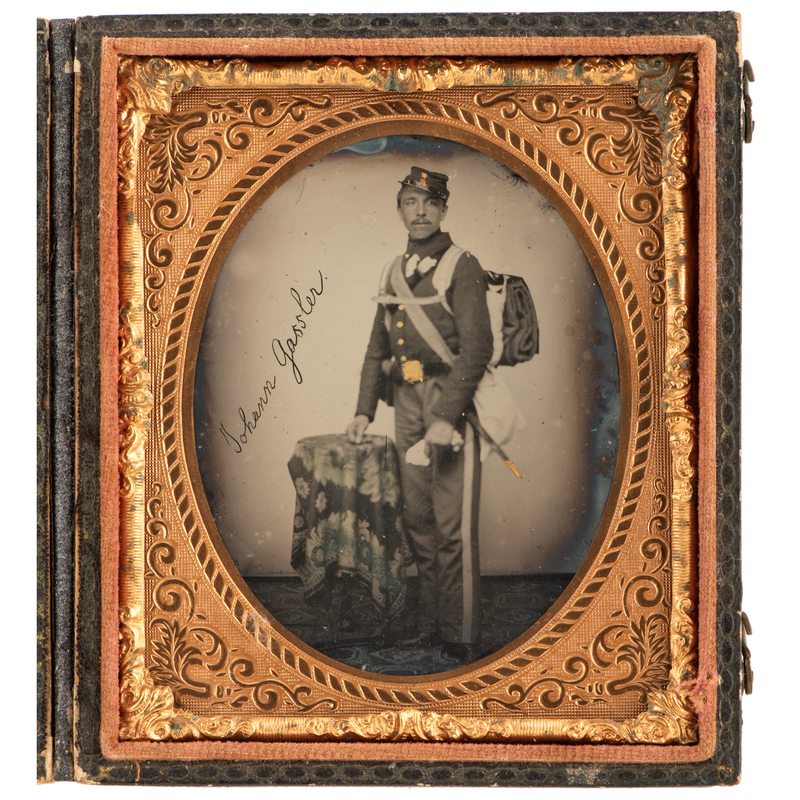 Sixth plate, hand-tinted ambrotype portrait of John Gassler standing in a studio setting, wearing his pack on his back. The subject's name, "Johann Gassler," is scratched into the image. Housed in full leather case. With photocopies of Gassler's service papers, death certificate, pension papers, and more.

The 8th (the 1st German Rifles) was recruited in New York City, there mustered into the US service on April 23, 1861, for two years, and left for Washington on May 27. At Miller’s farm the troops encamped and on July 10 were ordered to move toward Manassas as part of the 2nd brigade, 4th division of the Army of the Potomac. During the Battle of Bull Run the 8th was held in reserve and assisted in covering the retreat. The following winter it was quartered at Roach’s mills and Hunter’s Chapel, VA; moved to Winchester in March, 1862, and in May joined General Fremont at Petersburg, WV. It participated in the pursuit of General Jackson in the Shenandoah Valley, and as part of Blenker’s division fought at the battles of Cross Keys and New Market. At Middletown, the 8th was assigned to the 1st brigade, 1st division, 1st corps, Army of Virginia, under General Pope, and with that army took part in the battles of Sulphur Springs and the second Bull Run. In September, it became a part of the 11th corps and reached Fredericksburg immediately after the battle; camped during the winter at Stafford Court House and Brooks’ Station, and was mustered out of the service at the latter place on April 23, 1863.