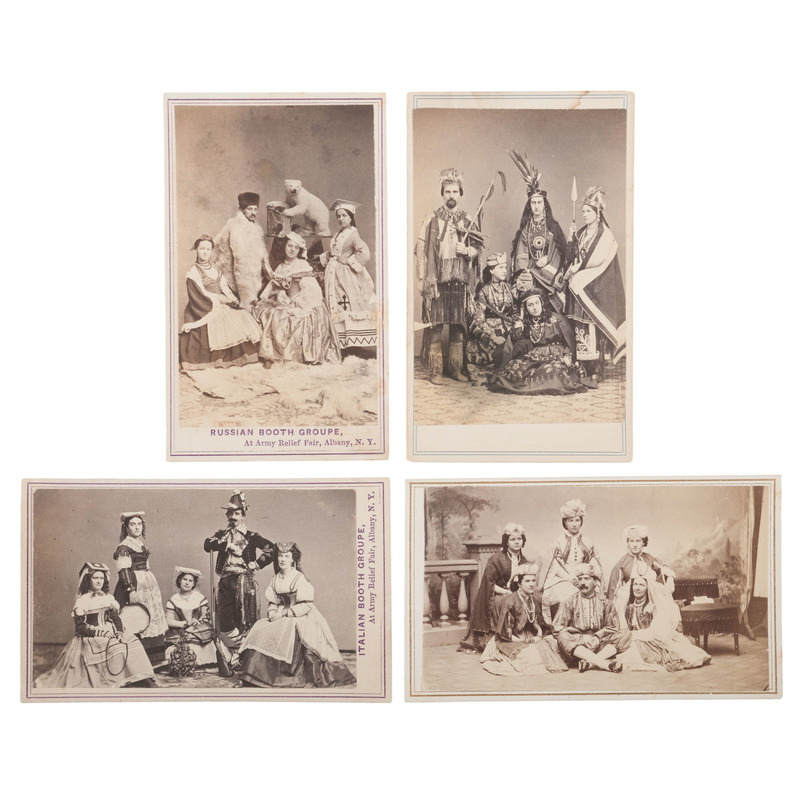 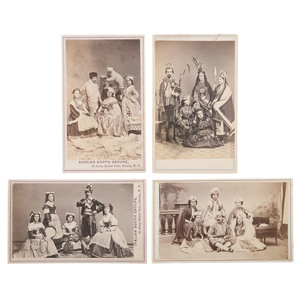 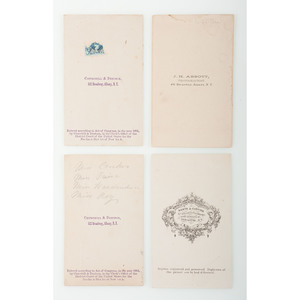 Lot of 4 CDVs featuring groups of performers most likely from the Sanitary Fair, or Army Relief Bazaar, held in Albany, NY, February through March of 1864. Includes view of four women and one man in Italian-style clothing, identified as the "Italian Booth Groupe" in caption on mount, copyrighted 1864 and credited to Churchill & Denison, Albany, NY. Names (presumably of those featured in the photograph) including "Miss Crocker," "Miss Paine," "Miss Hendrickson," and "Miss Roy," inscribed on verso; second carte by Churchill & Denison featuring three women, a man dressed in Russian garb, with a small stuffed polar bear behind them, identified as the "Russian Booth Groupe" in caption on mount.

CDV of representatives from the "Indian" or "Indian Wigwam" booth, dressed as Indians, with moccasins, headdresses, beaded clothing, and other props, credited to J.H. Abbott, Albany, NY; and CDV showing a group of five women and one man dressed as possible Middle Easterners, credited to Bonta & Curtiss, Syracuse, NY on verso.

The United States Sanitary Commission, created in June of 1861, was purposed to support US Army soldiers during the Civil War, especially with their growing sanitary needs including medicine and other hospital supplies. From 1863-1865, the primary means of fundraising for the USSC was hosting "sanitary fairs" in northern cities, by which local communities could get involved and contribute to the war effort. These fairs were typically held by women from the upper classes of society, and included a variety of attractions such as booths, expositions, balls, parades, auctions, raffles, and more. Notably, President Lincoln allowed the handwritten preliminary copy of the Emancipation Proclamation to be raffled off at the Albany fair, with tickets to enter the drawing costing only one dollar. All together, these fairs raised a total of 4.5 million dollars for the USSC.