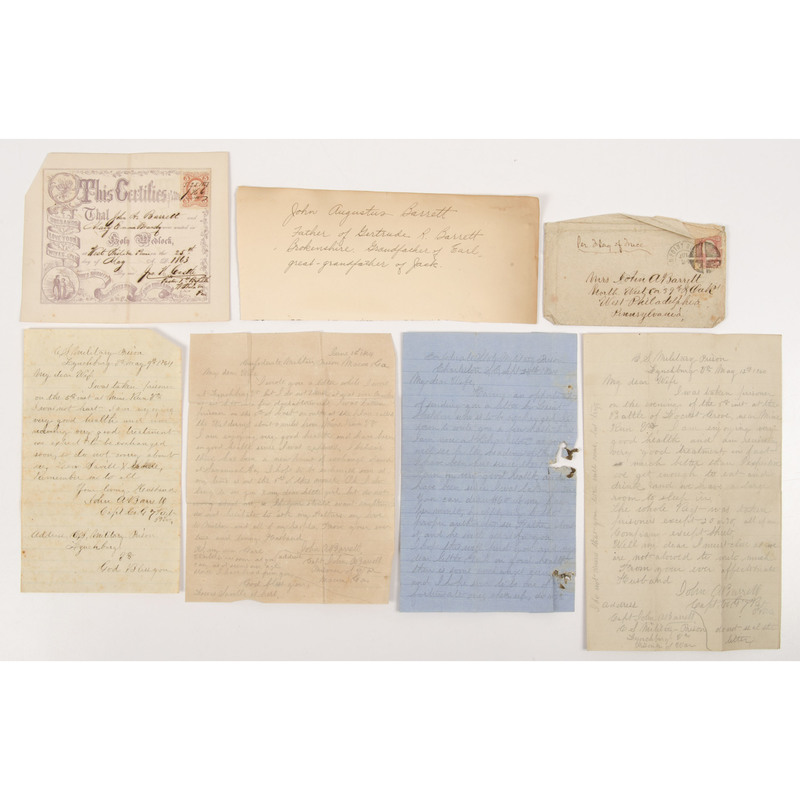 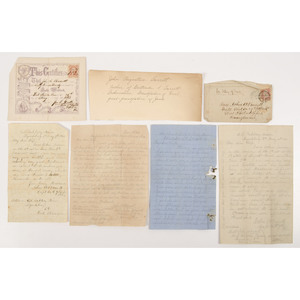 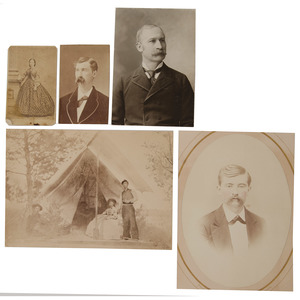 Lot of 4 Civil War-dated letters written by Capt. John A. Barrett, Co. G, 7th Regiment, PA 36th Volunteer Infantry. Letters are accompanied by 5 photographs and a marriage certificate. Consignor acquired this archive together with Lots 20 and 21 from an estate sale containing other materials identified to John A. Barrett.

The 36th Pennsylvania Volunteer Infantry fought heavily at Malvern Hill, Antietam, and Fredericksburg. Barrett's record identifies him as a POW on 5/5/64 at Wilderness, VA, and his letters affirm this. He writes to his wife from the Confederate Prison at Lynchburg on May 9th and again on May 12th, 1864, explaining his circumstances, "My dear Wife/ I was taken prisoner on the evening of the 5th inst at the Battle of Locust Grove, near Mine Run Va, ... The whole Regt was taken prisoners except 20 or 30, all of my Company except sheets...."  Barrett was one of 272 Union officers and soldiers captured at Wilderness after being surrounded by Confederate forces. He was then marched to Lynchburg. From Lynchburg, Barrett was moved to the Confederate Military Prison at Macon, Georgia.

Barrett writes again to his wife on June 1st, 1864, this time from Macon. He assures his wife that he is in good health, and explains that he expects to be exchanged soon. "I believe there has been a new point of exchange opened at Savannah, Ga, I hope to be exchanged soon as my time is out the 5th of this month. Oh I do long to see you & my dear little girl, but do not worry about me." Barrett was not to be exchanged swiftly though, as he was still confined at the time of his final letter to his wife on September 24, 1864. On this date he writes to her from prison in Charleston, S.C. He notes that he has not received a letter from her since the day he was captured, and implores her to write. He remains hopeful that he will be exchanged soon.

The exact date of Barrett's release is unknown, however, it is likely that he was released in early 1865 when regular prisoner exchanges resumed between the North and South. Little information could be gathered about his post-war life. His daughter, Gertrude R. Barrett Brokenshire, could be traced to Cleveland, and her descendants appear to have been the previous owners of the items in this collection.

The marriage certificate accompanying the letters serves to identify Barrett's wife, the recipient of the letters in this collection. John A. Barrett and Mary Emma Bransby were married in Philadelphia on May 25, 1863, by Pastor Jonathan H. Castle of the 1st Baptist Church in West Philadelphia. One of the photographs accompanying the collection is a CDV of a young woman identified in ink on verso as Mollie Bransby when 17 years of age. The CDV of the young Ms. Bransby carries the additional notation Carried all through the war.

Another photograph shows a group of young soldiers at a tent, with one soldier standing next to a seated young woman. A handwritten note on the back of this picture reads John A. Barrett. Based on a comparison with other photos in this collection and other related lots, it is very possible that the young man and woman on the right side of the image are John and Mary Emma "Mollie" Barrett. Three additional photographs appear to show an older, post-war John A. Barrett.

Letters have expected wear given age and some soiling, however, all text is legible.